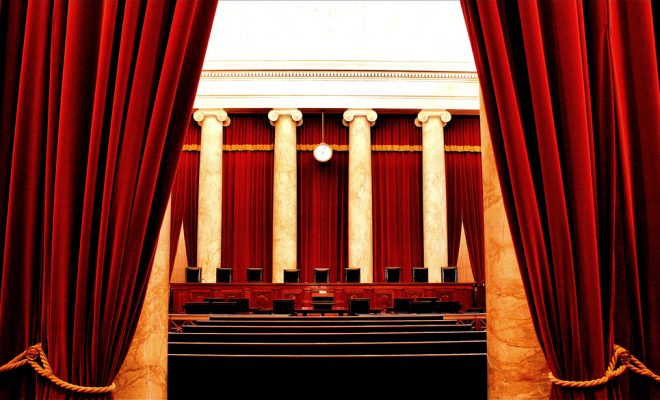 A Day After the Rule Change, Senate Confirms Neil Gorsuch to the Supreme Court

The year-long scuffle over the Supreme Court’s ninth seat ended Friday morning, when the Senate confirmed Neil Gorsuch to fill the vacancy left by Justice Antonin Scalia, who died last February. Voting largely along party lines–save for three Democrats–the 54-45 vote capped weeks of fierce debate, culminating in a historic rule change that could further deepen the partisan rancor in the Senate.

After failing to secure the 60 votes needed to break a Democratic filibuster, Senate Republicans on Thursday triggered the so-called “nuclear option,” effectively disposing of the filibuster option for Supreme Court nominees. As a result, the 60-vote threshold dropped to a simple majority which, with 52 members in the 100-member chamber, Republicans had no trouble reaching.

“[Gorsuch] has sterling credentials, an excellent record and an ideal judicial temperament,” Sen. Mitch McConnell said after the vote. “He has the independence of mind for fairness.” Throughout 20 hours of questioning from the Senate during his confirmation hearings last month, Gorsuch was predictably elusive, neglecting to say where he would stand on specific issues.

Democrats said his strict interpretation of the Constitution put him out of the “mainstream,” and argued he too often ruled in favor of big corporations. But from the beginning, the fight was a referendum on the man who nominated Gorsuch, President Donald Trump. It was also retribution for McConnell’s refusal to give Merrick Garland–who President Barack Obama nominated to the seat–a hearing. McConnell argued a sitting-duck president should not have the authority to nominate a judge to the Supreme Court.

But despite weeks of mostly uniform Democratic resistance to Gorsuch, three Democrats, all from states that Trump captured in the election, supported him: Sens. Heidi Heitkamp (ND), Joe Manchin III (WV), and Joe Donnelly (IN). Republican Johnny Isakson of Georgia did not cast a vote.

With an immovable Democratic resistance threatening to derail the nomination of a candidate who, by many metrics, was qualified, Republicans took the extreme step of pursuing the “nuclear option.” For legislative votes, however, the filibuster will remain in place. The move was not without precedent. In 2013, then-Democratic Majority Leader Harry Reid dismantled the filibuster option for lower federal court picks and cabinet appointees.

After leading the resistance against Gorsuch, Sen. Chuck Schumer (D-NY), the minority leader, said he hopes Gorsuch will not be beholden to the man who nominated him to the court. “I hope Judge Gorsuch has listened to our debate here in the Senate, particularly about our concerns about the Supreme Court increasingly drifting towards becoming a more pro-corporate court that favors employers, corporations and special interests over working Americans,” Schumer said, imploring Gorsuch to be “the independent and fair-minded justice that America badly needs.” Gorsuch will be sworn in on Monday.