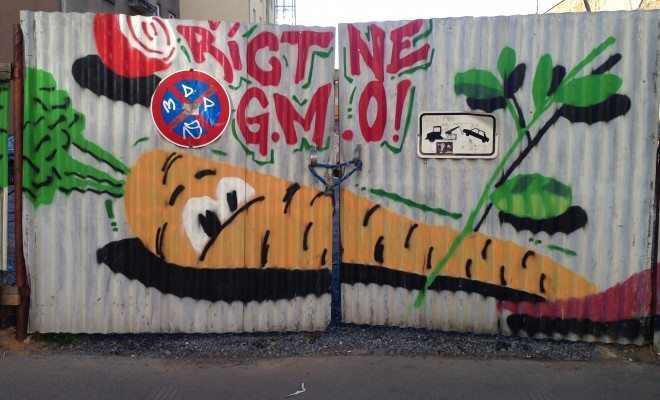 GMO Labeling: The American People Have A Right To Know

What’s for dinner tonight? Perhaps steamed corn, infused with some delicious dichlorophenoxyacetic acid. Or maybe, if you’re feeling bold, you’ll eat some tofu bites containing glyphosate, which the International Agency for Research on Cancer classified in March as “probably carcinogenic in humans.” Corn, soy, sugar, papayas, milk, zucchini—the list goes on; the number of genetically modified organisms, or GMOs, is multiplying. The U.S. House of Representative’s decision on Thursday to pass a law that would block states from mandating GMO labels only contributes to the danger that these GMO or genetically engineered (GE) foods inflict on farmers, on the environment, and on consumers.

So what are GMOs exactly, and why are they causing such a scene on Capitol Hill? Genetically modified organisms are plants or animals that are genetically altered to exhibit traits that are not natural, primarily a resistance to pesticides and herbicides. It may sound brilliant to have developed crops that can withstand the chemicals necessary to cultivate large amounts, but GMOs are often untested, require dangerous chemicals in their farming, and may be a threat to organic foods and to the environment. In the United States, GMO foods require no pre-market testing. Unlike with drug production, where there is mandatory testing on animals, mandatory human clinical trials, mandatory tests of carcinogenicity, fetal impact, neurological impact, and at least some limited allergy testing, none of those steps are required for these crops.

The American Medical Association has stated that mandatory testing should be required before GE foods and ingredients are introduced on the market, but lawmakers continue to ignore medical research centers, farmers, and constituents who oppose or at least want labels on GMOs. Maine, Connecticut, and Vermont have all passed laws mandating the labeling of genetically modified foods for consumers but unfortunately these three states are the exception, not the rule. Last week, a majority of Representatives voted in favor of a law that prevents states from mandating GMO labels, stating that labeling GMO foods is “misleading.” Supporters of the bill said that labeling foods that contain GMOs sends a message to consumers that the products are risky, and that according to the Food and Drug Administration (FDA), GMOs are not dangerous. However, that information is based on testing by scientists who are funded and influenced by the companies who own GMOs. Opponents of the bill called banning the labeling of GMOs “an infringement of the public’s right to know what’s in their food.”

Currently, 64 countries worldwide require the labeling of GMOs, including all 28 nations of the European Union, Russia, and China. Our lack of GMO labels is not only causing us to fall behind most other developed countries, but is also failing the satisfy a vast majority of Americans who support GMO labeling. A total of 92 percent of Americans want GMO foods to be labeled and in the past two years, more than 70 labeling bills or ballot initiatives were introduced across 30 states.

In 2012, some of America’s most profitable chemical companies teamed up with large food companies to defeat California’s Proposition 37, an initiative that would have required labeling of genetically engineered foods. Monsanto, PepsiCo, CocaCola, Nestle, and several other companies spent over 45 million dollars to block the legislation. Why? Because keeping consumers in the dark about the dangers of GMOs can be profitable, and requiring labels would allow consumers to question what they’re consuming before they buy. The companies that own GMO seeds, which are patented, sell their seeds to farmers who then buy herbicides from the same companies who also own the chemicals. This brilliant business model is racking up millions for these corporations, but is causing people to consume more and more dangerous herbicides.

Another concerning symptom is that weeds are becoming resistant to the hazardous chemicals. Genetically engineered crops are designed to survive weed killers. Corporations like Monsanto that create these herbicides and pesticides claim that herbicide use has decreased since the introduction of GE crops; however, before GE crops were cultivated, weeds resistant to Roundup did not exist. There are now 14 known species of Roundup-resistant weeds in the U.S. alone, known as “super weeds.” Super weeds have been reported on half of all U.S. farms and cost farmers millions of dollars a year to control. With more weeds becoming resistant to Roundup, farmers now have to spray larger quantities of even more toxic herbicides on their crops to kill weeds, like 2,4-dichlorophenoxyacetic acid (2,4-d), a component of the poisonous Agent Orange used during the Vietnam War. GMOs intensify the problem of herbicide use and create more super weeds that are immune to harsh chemicals, disrupt the environment, and contaminate water systems.

In 2010 the President’s Cancer Panel reported that 41 percent of Americans will be diagnosed with cancer in their lifetime. The panel pointed to chemicals, primarily herbicides in our air, water, soil, and food as the primary cause of this increased cancer rate. Later that same summer, the journal Pediatrics reported in a peer-reviewed study that there is a direct correlation between pesticide exposure and increased ADHD diagnoses. In 2011 a study revealed that the insecticide in GMO corn was detected in the umbilical cord blood of pregnant women. With 90 percent of soy and 85 percent of corn now genetically engineered, and super weeds on the rise leading to harsher chemicals being used on our food, GMO consumers are being exposed to more and more dangerous chemicals. And without GMO labels, shoppers have no idea if the foods they are eating are a part of that group.

Congress’s decision last week to block any mandatory labeling of foods made with genetically engineered crops proves that corporate influence in Washington is taking away our right to choose what we consume. Genetically modified foods can and should be labeled, and Congress has an obligation to listen to the 92 percent of Americans who support the right to know what they are consuming via GMO labels. The FDA’s Federal Food Drug and Cosmetic Act states that the consumer has a right to know when something is added to food that changes it in ways a consumer would likely not recognize, and that indicates labeling should be required. Just like juice from concentrate, wild versus farmed, country of origin, and many other mandatory labels we see on our foods, GMOs should also be visible, since the chemicals that come with them are not. We have a right to know and a right to choose. It’s time to question whether the FDA and Congress are here to protect us, the people, or to protect a handful of chemical companies that want to keep us in the dark.