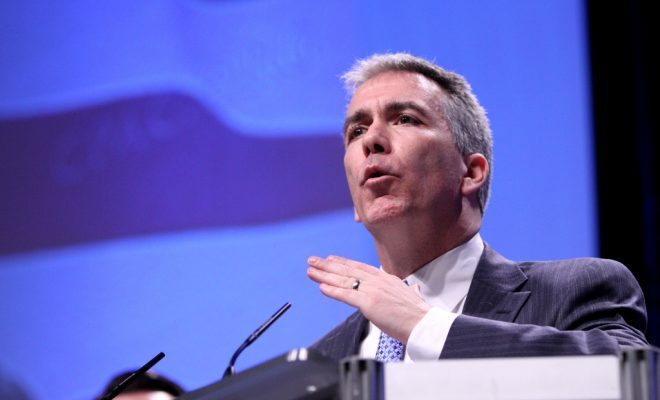 Former congressman and radio host Joe Walsh threatened Obama and Black Lives Matter supporters on Twitter late Thursday night. In a tweet that since has been deleted he said “this is now war,” before warning Obama to watch out and that the “real America is coming for you.”

Thursday night was the deadliest night for police officers since 9/11, leaving five officers dead after gunmen fired shots at police during a protest against police shootings. Republican Joe Walsh was very active on Twitter throughout the night posting several updates blaming Obama and liberals for the tragedy.

BLM should be categorized as a hate group.

Totally ignoring the recent shootings of Alton Sterling and Philando Castile, or for that matter all 136 black people that have already been killed by the police this year, Walsh had the guts to say it’s “time to stand against the cop haters.”

It's time 4 patriotic Americans to stand up & stand against all the Cop haters – from Obama to the thugs on the street.

It's way past time.

You did this Obama.

You did this liberals.

You did this #BLM.

Time to defend our Cops. Wake up. https://t.co/Zoc3x2xlMk

Finally he “explained” his tweets to the Chicago Tribune on Friday morning, saying that of course he didn’t call for violence against Obama or Black Lives Matter, because “It would end my career and it’s wrong. I would never say anything as reprehensible as that.”

Walsh was criticized by a lot of people, including activist and musician John Legend.

Joe Walsh needs to be arrested for threatening our President. STFU @walshfreedom

Walsh is from Illinois and has a history of making racist  and offensive statements.

In 2011 when Walsh was in Congress he expressed his thoughts on the reason for Obama’s election in an interview with Slate.

Why was he elected? Again, it comes back to who he was. He was black, he was historic […]a black man who was articulate, liberal, the whole white guilt, all of that.

At a meeting in 2012 Walsh talked about radical Islam as a threat “at home,” saying “It’s in Elk Grove, it’s in Addison, it’s in Elgin,” referencing various towns in Illinois and upsetting local Muslims.

In 2013 Walsh started hosting a radio show after losing his seat in Congress. Only a year later he came under fire for using racial slurs when talking about American football, including the n-word. He was shut off from his own show and appeared to have no idea why.

The station keeps cutting me off. I don't know why

And here comes to the General Manager. It appears I can say Redskins, which is supposedly offensive, but when I say other words, commercial

Walsh seems to be lacking self-censorship and social skills. Maybe he should just stay away from his Twitter account for now.

Emma Von Zeipel
Emma Von Zeipel is a staff writer at Law Street Media. She is originally from one of the islands of Stockholm, Sweden. After working for Democratic Voice of Burma in Thailand, she ended up in New York City. She has a BA in journalism from Stockholm University and is passionate about human rights, good books, horses, and European chocolate. Contact Emma at EVonZeipel@LawStreetMedia.com.
Share:
Related ItemsBlack Lives MatterBLMCongressDallasDallas ShootingsIllinoisJoe WalshObamaRepublicanThreatTwitterWalsh