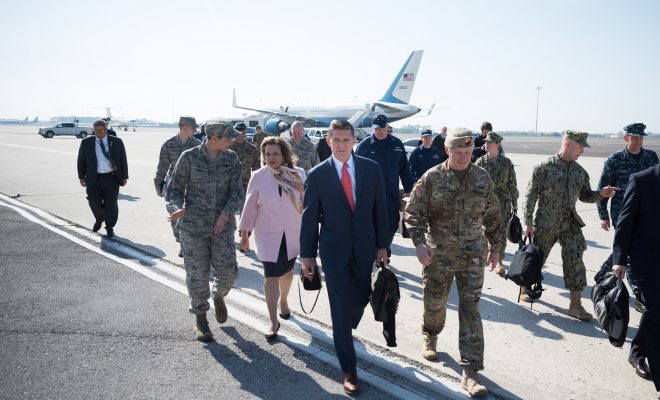 Image Courtesy of Chairman of the Joint Chiefs of Staff's photo stream; License: (CC BY 2.0)

Did Michael Flynn Speak with Russia About Sanctions During Transition?

During the transition period, National Security Adviser Michael Flynn reportedly discussed President Barack Obama’s sanctions against Russia with the Russian ambassador. According to current and former U.S. intelligence and law enforcement officials, Flynn and Sergey Kislyak, the ambassador, exchanged texts and at least five phone calls in the moments before and the day after Obama announced his actions on Russia, which were in retaliation for its election hacking. Flynn and White House officials, including Vice President Mike Pence, repeatedly denied that the two men discussed the sanctions.

In an interview with The Washington Post, Flynn also denied he and Kislyak spoke about the sanctions, which Obama announced on December 29. However, Flynn, through a spokesman, slightly backtracked on Thursday. Flynn “indicated that while he had no recollection of discussing sanctions, he couldn’t be certain that the topic never came up,” the spokesman said.

This saga began on December 29, when Obama expelled 35 Russian diplomats from the U.S., and shuttered two Russian-owned compounds in New York and Maryland. The sanctions were a response to the U.S. intelligence agencies’ conclusion that Russia meddled in the election by hacking email correspondences between Democratic Party officials. According to U.S. officials who have reviewed intelligence reports and diplomatic cables, Kislyak requested a phone call with Flynn when news of the impending sanctions began to leak.

On December 30, when Putin announced he would not retaliate, everyone seemed surprised but Trump. “Great move on the delay,” he said in a Twitter message. “I always knew [Putin] was very smart.”

White House officials have denied that any impropriety took place during the phone calls. “They did not discuss anything having to do with the United States’ decision to expel diplomats or impose censure against Russia,” Pence said in an interview with CBS last month. He also said Trump’s team had no contact with Russia during the campaign. Flynn has raised concerns that he has a more-than-cordial relationship with Russia and its president. In 2015, Flynn sat next to Putin at a banquet in Moscow for the state-owned television network Russia Today.

While Trump has tempered his seemingly pro-Russia stance since the campaign–he recently said the sanctions will remain in place–many worry that Flynn maintains too favorable of a relationship with Russian officials. There is also the question of whether he broke federal law by discussing the sanctions with Kislyak. The Logan Act of 1799 bars U.S. citizens from interfering in foreign affairs “with intent to influence the measures or conduct of any foreign government.” It is unclear what qualifies as a breach of that statue; it has never been acted on in court. The FBI, however, is investigating the correspondences between Flynn and Kislyak.

Alec Siegel
Alec Siegel is a staff writer at Law Street Media. When he’s not working at Law Street he’s either cooking a mediocre tofu dish or enjoying a run in the woods. His passions include: gooey chocolate chips, black coffee, mountains, the Animal Kingdom in general, and John Lennon. Baklava is his achilles heel. Contact Alec at ASiegel@LawStreetMedia.com.
Share:
Related ItemsMichael FlynnMike PenceRussiaSanctionsVladimir Putin