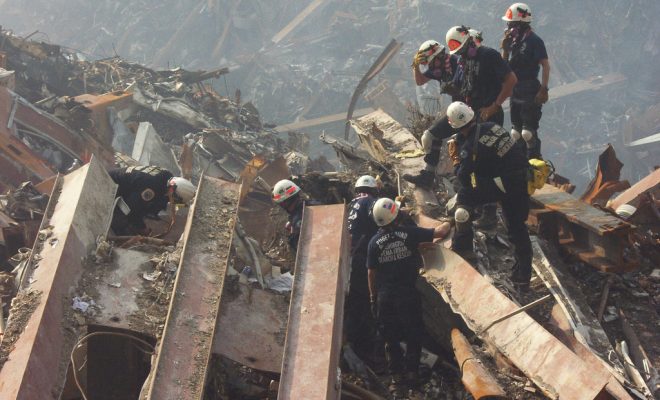 Rudy Giuliani set Twitter aflame on Monday when, speaking at a Donald Trump event in Ohio, he said: “Under those eight years before Obama came along, we didn’t have any successful radical Islamic terrorist attack in the United States.” Attempting to contrast terrorism in America under Obama and Bush, Giuliani instead left people confused and angry–obviously, the famed 9/11 attacks happened before Obama’s presidency, during Bush’s time in office.

But let’s assume Giuliani did not mean exactly what he said. Not only was he the mayor of New York City at the time of 9/11, but he also spent a good portion of his speech on Monday discussing 9/11. It’s fairly obvious he didn’t simply forget about that gruesome day. So then, in light of Giuliani’s remarks, we decided to take a look at how terrorism has changed from the Bush years to the Obama years. Have there been more or fewer attacks? More fatalities? Injuries? Apart from omitting 9/11, was Giuliani really that far off the mark?

First of all, let’s define terrorism. The Global Terrorism Database (GTD) compiles statistical information regarding global terrorist attacks since 1970. GTD defines a terrorist attack as “the threatened or actual use of illegal force and violence by a non‐state actor to attain a political, economic, religious, or social goal through fear, coercion, or intimidation.”

According to the database, from 2001 to 2008, when Bush held the White House, there were 168 total terrorist attacks in the United States. From 2009 to 2015 (the database does not include data for 2016), under Obama, there were 137 total terrorist attacks. Of course, that figure does not include 2016 attacks, so it’s unclear if by the end of 2016 the number of attacks under Obama will be higher than those that took place under Bush.

Four attacks happened on September 11, 2001 that resulted in more fatalities and injuries than all other terrorist attacks in U.S. history combined: the two World Trade Center buildings in New York City were taken down by hijacked airplanes, killing 2,764 people and injuring scores more; another hijacked airplane hit the Pentagon, killing 189 and injuring 106; a fourth airplane was taken down in a field in Shanksville, Pennsylvania, killing all 44 passengers onboard. All of this happened under President Bush, a point Giuliani did not mention when he said “we didn’t have any successful radical Islamic terrorist attack in the United States” before Obama.

So to recap: fatal terrorist attacks have been more frequent under Obama than Bush, but the 9/11 attacks resulted in heavy casualties, by far the most in U.S. history, under Bush’s or anyone else’s administration.

With the spread of the Islamic State and its ideology, attacks inspired by “radical Islam” dominate our definition of what a terrorist attack means. Giuliani–and Trump, who gave a speech on foreign policy following Giuliani’s remarks–mentioned “radical Islamic terrorism” time and time again. But even considering Islamic-inspired attacks other than 9/11–which was masterminded and executed by al-Qaeda operatives–Giuliani’s statement is not exactly accurate, though it is close.

The most striking example of “radical Islamic terrorism” under Bush, other than 9/11, came in March 2006, when a man drove his SUV through the University of North Carolina’s Chapel Hill campus. There were no casualties, but nine people were injured. In a letter written by attacker Mohammed Taheri-Azar, he stated his motive as avenging the deaths of Muslims around the world. He listed a 9/11 hijacker as one of his heroes. Another prominent attack motivated by radical Islam came in December 2001, when Richard Reid, or the “shoe bomber” boarded a plane in Miami with explosives in his shoe. The bomb failed to detonate, so nobody was hurt.

this fire truck in nyc must have melted itself, according to rudy giuliani pic.twitter.com/2BZrG84k9Z

By contrast, when Obama took office in 2009, the United States was entrenched in the Iraq and Afghanistan wars. His withdrawal from those wars, coupled with the Arab Spring protests that deposed strongmen in Egypt and Tunisia, led to power vacuums in many corners of the Middle East. Iraq, Syria, Libya, Afghanistan, and Yemen are currently in turmoil, overrun with extremist groups: ISIS, al-Qaeda, the Taliban, al-Shabaab, and others. Since 2014, ISIS has been the  number one exporter of worldwide terror. Its soldiers have directly attacked cities in Europe–including Nice and Paris in France; Brussels, Belgium; and four cities in Germany a few weeks ago. Meanwhile, U.S. citizens inspired by ISIS’s radical ideology have hit cities across America–Orlando, Florida; San Bernardino, California; the Fort Hood military post in Killeen, Texas.

All told, the context with which Obama’s administration has operated in is vastly different than the period between 2001 and 2008 when Bush was in the White House. The threats Bush faced and those Obama currently faces are vastly different. When Giuliani said “under those eight years before Obama came along, we didn’t have any successful radical Islamic terrorist attack in the United States,” on Monday, he was wrong. Not just because he neglected to include 9/11, the worst terrorist attack in U.S. history by far. But also because there were other terrorist attacks under Bush’s watch, even a few that were carried out under a “radical Islamic” ideology. However, terrorist acts committed under the auspices of Islamic radicalism are on the rise and are certainly more prevalent in the Obama years.

2015 and 2016 were outliers in the last three to four decades in terrorism-caused deaths in America and elsewhere in the West. According to a New York Times analysis of GTD data since 1970, terrorism in the West was worse in the 1970s and 80s than it is today, though it is on the rise. Terrorism remains a greater source of deaths in the Middle East and Africa, however, though that number has been decreasing in recent years.

Rudy Giuliani, mayor of NYC during 9/11, said there were no successful terror attacks before Obama got in office.

Son, he is out his mind.

And in an interview with the New York Daily News on Tuesday, Giuliani blamed his omission of 9/11 on “abbreviated language.” He vowed to continue his shorthand way, saying, “will I again say things in the future that can be taken out of context or misinterpreted? Of course I will.” He added, “I didn’t forget 9/11. I hardly would. I almost died in it.”