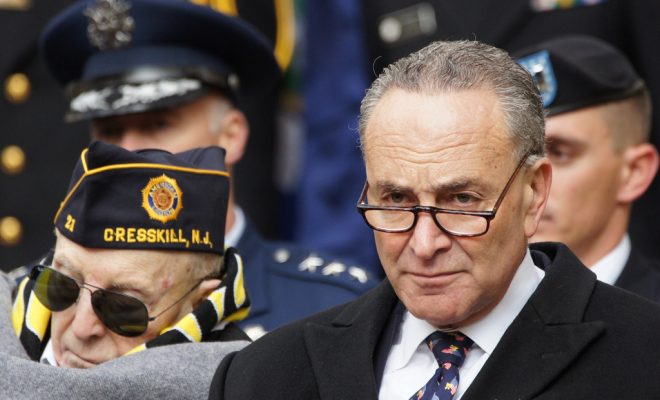 Democrats Signal That They Will Filibuster The Gorsuch Vote

Neil Gorsuch will likely face an uphill battle in securing the Supreme Court’s vacant ninth seat. On Thursday, the last day of Gorsuch’s Senate confirmation hearings, Democrats signaled they would filibuster President Donald Trump’s nominee to the Supreme Court. That would leave Republicans with two options: introduce a new nominee, or pursue the so-called “nuclear option,” and obliterate the filibuster possibility for Supreme Court nominees.

In a speech on the Senate floor Thursday morning, Sen. Chuck Schumer (D-NY), the Minority Leader, said Gorsuch “will have to earn 60 votes for confirmation,” adding: “My vote will be no.” As the rules stand, Gorsuch would require 60 votes–eight Democrats along with the 52 Republican Senators–to pass. If Republicans decide to scrap the filibuster option, a simple majority would be sufficient.

Voicing a common concern among Democrats and liberal groups, Schumer said he fears Gorsuch would interpret the law in an ultra-conservative manner. “His career and judicial record suggest not a neutral legal mind but someone with a deep-seated conservative ideology,” Schumer said, adding that if Gorsuch cannot clear the 60-vote mark, “the answer isn’t to change the rules,” but “to change the nominee.”

If Republicans, led by Sen. Mitch McConnell (R-KY), choose to scrap the filibuster–something Trump has expressed support for–they would not be without precedent. In 2013, Democrat Harry Reid, the Senate Majority Leader at the time, changed the rules for most presidential appointments, including federal judiciary nominees and cabinet appointees, to require simple majorities instead of the 60-vote threshold. Reid, who recently retired, kept the filibuster in place for Supreme Court nominees.

In undoing the filibuster, Reid and most Democrats (a few opposed the move) said it was a necessary response to what they saw as unprecedented Republican obstruction. Republicans saw it as a gross abuse of power that would come back to haunt Reid. McConnell called it a “power grab.” Indeed, many of Trump’s less-popular cabinet appointments narrowly passed the Senate, and likely would have been thwarted had the ability to filibuster been in place.

Gorsuch’s best chance at securing the nomination could come through the handful of Democrats who will be up for re-election next year in states that Trump won. But if Sen. Bob Casey (D-PA), who is up for re-election next year, is a harbinger of how his colleagues will vote, Gorsuch would fall short of 60 votes. “I have serious concerns about Judge Gorsuch’s rigid and restrictive judicial philosophy,” Casey, said on Thursday. Gorsuch, he said, “employs the narrowest possible reading of federal law and exercises extreme skepticism, even hostility, toward executive branch agencies.”