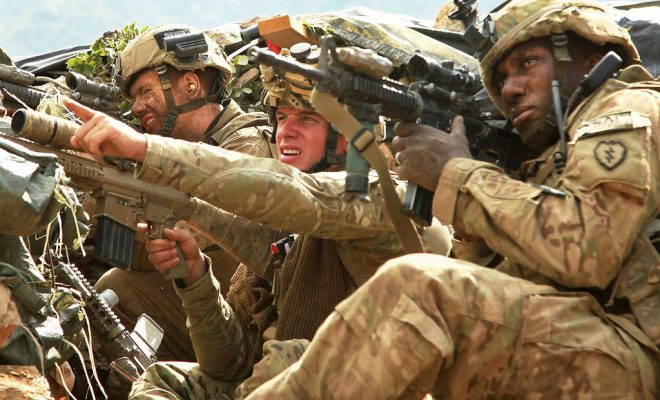 The House passed a defense bill on Friday that included a description of global warming as “a direct threat to the national security of the United States.” The bill, which sets the Pentagon’s budget and priorities for Fiscal Year 2018, easily passed by a 344-81 vote.

In addition to its acknowledgement of climate change as a potential security threat, the National Defense Authorization Act includes a number of amendments that directly contradict Trump Administration policy.

For instance, the bill declines President Donald Trump’s request to shutter a number of military bases around the country in 2021. Defense Secretary James Mattis told the Armed Services Committee in a hearing last month that closing the bases would save $10 billion over five years. The Obama Administration failed to garner congressional support with the same request.

An additional rebuff to Trump’s stated policies is the bill’s directive that the Pentagon create a so-called “Space Corps.” The proposed unit, opposed by both the Pentagon and the White House, would fall under the Air Force’s auspices, and would provide a front line of defense against future space-related threats. The Senate will negotiate the proposal when it takes up the defense bill.

But the bill’s most surprising feature is its nod to the myriad threats posed by climate change. In addition to calling climate change a “direct threat” to U.S. national security, it also directs the Pentagon to issue a report to Congress on the effects climate change might have on military bases.

Republicans in Congress have long been reluctant to address climate change as a real threat, and Friday’s vote by the Republican-controlled House might mark a change in posture.

Trump has made clear his own views on climate change–he recently withdrew the U.S. from the 194-nation Paris Climate Accord–but the Pentagon’s highest-ranking official, Mattis, has hinted that he recognizes the security threat posed by rising temperatures.

“‘I agree that the effects of a changing climate—such as increased maritime access to the Arctic, rising sea levels, desertification, among others—impact our security situation,” Mattis said in his confirmation hearing testimony earlier this year.

Speaker of the House Paul Ryan (R-WI) expressly supported the bill, specifically for its 2.4 percent pay increase for military troops. “[The bill] includes support for military families, and honestly, a really well-deserved pay raise for our troops,” Ryan said earlier this week.