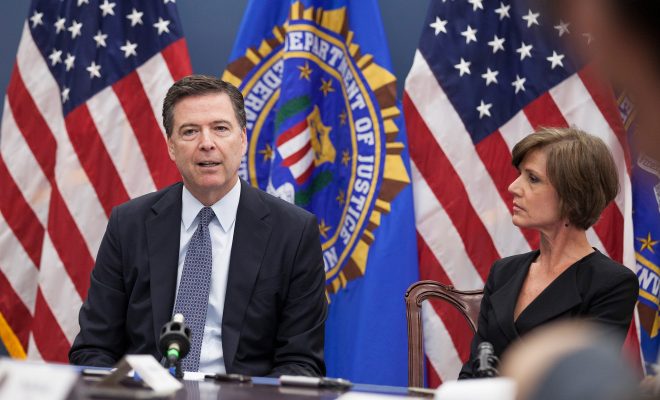 During a hearing with the Senate Judiciary Committee on Wednesday morning, FBI Director James Comey told lawmakers he felt “mildly nauseous” that his actions may have affected the outcome on November 8. This was Comey’s first hearing since he told the House in March that the FBI has been investigating ties between Trump’s campaign and the Russian government. It also gave a clearer view into Comey’s thoughts on the consequences of his actions leading up to Election Day.

But although Comey implied that his actions could be regretful–including publicly announcing that the investigation into Hillary Clinton’s private email server was ongoing on October 28–he said concealing that information would have been “catastrophic.” Democrats–including Clinton–have derided Comey for going public with information regarding the Clinton investigation but failing to reveal the Trump investigation until months after the election.

The hearing opened with remarks from the committee’s top members from each party, Senators Chuck Grassley (R-IA) and Dianne Feinstein (D-CA). Grassley pressed for specifics on why Comey and the FBI pursued the investigation into Trump’s role in the Kremlin’s election meddling. “We need to know if there was anything improper between the Trump campaign and the Russians,” he said, or if Trump critics are merely “chasing a conspiracy theory.”

Feinstein focused on the FBI’s potential effect on the election. “I join those who believe that the actions taken by the FBI did in fact have an impact on the election,” she said. Clinton, in an extensive and unguarded interview on Tuesday, pegged her loss on Comey, WikiLeaks, and Russia. She did, however, take “absolute personal responsibility,” for losing to Trump. “I was the candidate. I was the person who was on the ballot,” she said.

Comey also made it clear in the hearing that Russia, which U.S. intelligence agencies concluded hacked Democratic operatives’ emails to aid Trump’s campaign, remains a threat. Russia is the primary threat to democracy, he said, and bluntly concurred when asked if Moscow’s cyber efforts are ongoing. “Yes,” he responded. Seemingly responding to Clinton’s remarks on Tuesday, Trump sent a series of tweets that critiqued Comey and Clinton, and referred to himself in the third person, all at the same time:

FBI Director Comey was the best thing that ever happened to Hillary Clinton in that he gave her a free pass for many bad deeds! The phony…

…Trump/Russia story was an excuse used by the Democrats as justification for losing the election. Perhaps Trump just ran a great campaign?