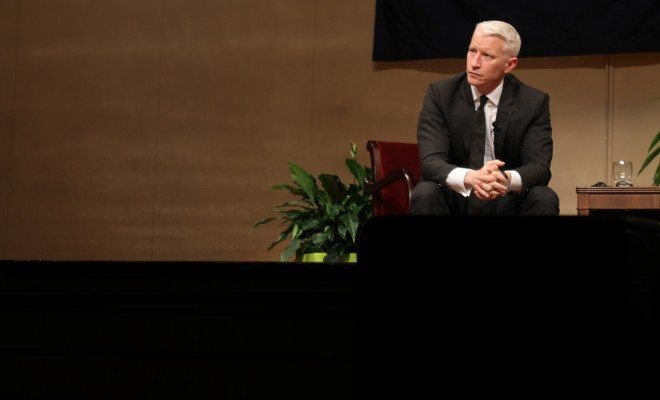 Anderson Cooper Gets Personal During Talk at GW

When Anderson Cooper came to speak at George Washington University, he had to adjust the timing of the event. Due to a change in scheduling, the event previously scheduled for the morning was shifted to the evening. What was the early morning emergency that caused Mr. Cooper to change his plans? An interview with Melania Trump.

When interviewer Frank Sesno, the Dean of GW’s School of Media and Public Affairs and former CNN correspondent, asked about Cooper’s time with Mrs. Trump, Cooper told the audience that she was “cautious” and “lovely,” but that the interview would certainly not be a news-making revelation. At the event, Sesno’s questions for Cooper discussed the media’s role in the presidential election, asked him to reflect on some video clips, and later turned to his personal life.

As for CNN’s coverage of the presidential elections, Cooper defended the media’s role in the primaries several times during the event, saying that Trump is hyper-aware of the media and that he is the only candidate willing to be interviewed so often. When criticized for giving Trump excessive airtime on CNN, Cooper argued that a presidential run as unorthodox as Trump’s is worthy of attention—that it points to a very real wave of anger and distrust in the American public.

Pushed further on the issue of the media’s role in elections, he argued that much of the onus is on the viewers. Today we have unprecedented access to information through the internet, and each person has the ability to become educated on a topic in a matter of minutes. He could make an hour long documentary on healthcare in America, but it’s not worth the time and effort if no one watches.

Then came time to review some video from Cooper’s career at CNN. Sesno showed some clips to Cooper and the audience, asking for more background on Cooper’s decisions as an anchor and interviewer. One clip was an interview with Senator Mary Landrieu in the wake of Hurricane Katrina, in which he hears platitudes from the senator. Cooper expresses the anguish of the people of New Orleans, forcing her to face the horror of the natural disaster. After watching the clip Cooper elaborated on his thought process, adding that he had seen a family left dead in their flooded home just the day before his interview, an image that haunted him as he spoke with the Senator.

When asking about his interactions with the presidential candidates, Sesno presented a clip that showed one of Hillary Clinton’s shortcomings—a sort of tone-deafness. The video, taken from the February 3 Democratic Town Hall, shows Hillary not-so-deftly addressing her high-priced speeches to Goldman Sachs and other Wall Street firms. Sesno highlighted Cooper’s decision to demand a real answer for the large fees, rather than being content with a stock response.

At the end of the event, Cooper began talking about his personal life, giving the audience a look at a side of him rarely revealed on CNN. Cooper’s older brother committed suicide at the age of 23, and his father died when he was 10 years old. He told the audience that he felt so much grief and pain that he needed to find a surrounding that reflected that feeling in order to make sense of it. That was why, after graduating from Yale, Cooper took a camera and some friends to travel to the most war-torn parts of the world. He remembers sleeping on a roof in Somalia, exploring with very little money while trying to find connection in distant and foreign cultures.

The event Cooper spoke at was sponsored by Allied in Pride, a student organization at George Washington University dedicated to LGBTQ issues, and so Cooper also opened up about his identity as well. Although he was not publicly “out” for many years, he told the audience that he has always been openly gay in his professional life, and in no uncertain terms that being gay is one of the greatest blessings of his life.

Being the great-great-great-grandson of railroad magnate Cornelius Vanderbilt, Cooper has had a cushy and privileged upbringing. Without also being gay, Cooper thinks he may not have been aware of his privilege, and the discrimination that others go through daily. His sexual orientation gave him more perspective on life, leading him to be more of an observer than an active participant. “Being gay has taught me empathy, and empathy has made me a better reporter,” he said.

Cooper ended his talk by answering questions from the audience. He took the opportunity to sum up his own reporting modus operandi. He wants to confront his interviewee with the facts, rather than his opinion. He’s not interested in voicing how he feels, but rather to get an understanding of how the other person operates, and to understand the essence of their positions.

Cooper warned that fame can be “gangrenous” and told the audience that if you become obsessed with your own image, you lose integrity as a journalist. At an event was co-hosted by GW’s School of Media and Public Affairs, that warning should be well-heeded by aspiring journalists.