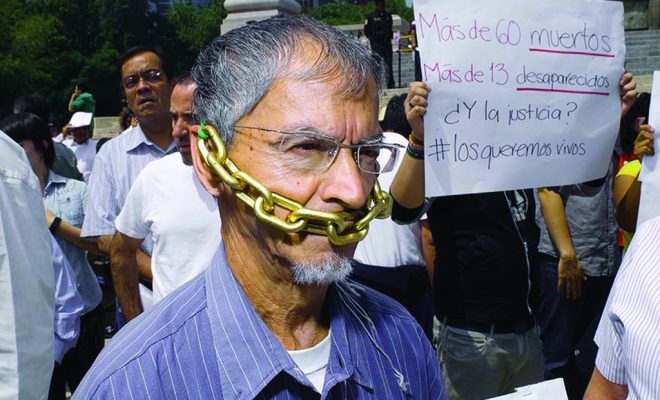 Who is Responsible for Anti-Media Violence in Mexico?

The recent spate of attacks is shocking but not surprising. Human rights and freedom of the press advocates, both domestic and international, have long been calling for a response to anti-media violence in Mexico.

Freedom House’s 2016 Freedom of the Press Index named Mexico “one of the world’s most dangerous places for journalists and media workers,” citing numerous violent attacks in 2015. Conditions have only been intensifying.

According to a report by Article 19–a non-profit devoted to protecting freedom of expression–suppressive and/or violent attacks on journalists have been on the rise since 2010. The report found 426 acts of aggression against journalists and 11 homicides in 2016. While 2016 was the bloodiest year for journalists under President Enrique Peña Nieto and the worst since 2000, 2017 may surpass it.

Despite these statistics, Peña Nieto’s government seems unconcerned with attacks on journalists. Article 19 reports that the Mexican Special Prosecutor’s Office on Crimes Against Freedom of Expression–known in Mexico as FEADLE, its Spanish acronym–only investigated 118 cases of the 426 acts of aggression against journalists and that 99.75 percent of attacks go unresolved.

Although criminal organizations often take most of the blame for any kind of violence in Mexico, there is a slew of evidence implicating the government in the anti-media violence. In 2016, “State agents” supposedly perpetrated 53 percent of the 426 acts of aggression identified by Article 19–criminal organizations are believed to have perpetrated 4 percent of the attacks.

Last month, Gilberto Israel Navarro Basaldúa, a journalist from the city of Guanajuato, reported that an employee of the municipal government’s economic council had swerved his car and hit Navarro off his motorcycle. Although employees of state and municipal governments are believed to have carried out the majority acts of aggression, Article 19 found 56 examples in which federal officials allegedly attacked the press.

Historically victimized by criminal organizations and now increasingly victimized by government officials, the Mexican journalists have no place to turn. Freedom of the press has long been under threat in Mexico, but it appears the government is intent on undermining the expressive freedom in its entirety.

Callum Cleary
Callum is an editorial intern at Law Street. He is from Portland OR by way of the United Kingdom. He is a senior at American University double majoring in International Studies and Philosophy with a focus on social justice in Latin America. Contact Callum at Staff@LawStreetMedia.com.
Share:
Related ItemsAnti-Media ViolenceCartelsFreedom of ExpressionFreedom of the PressJournalismMexicoPresident Enrique Pena NietoViolence