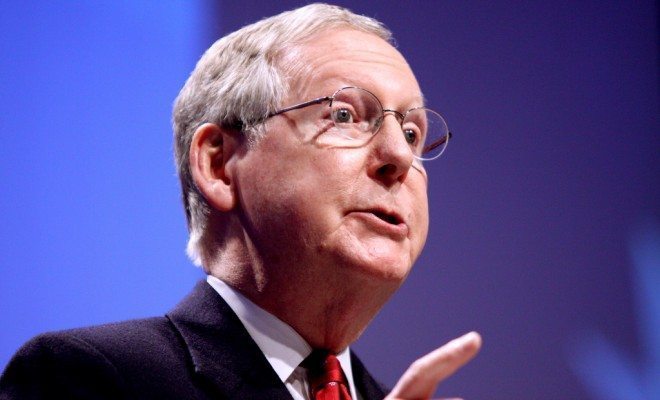 After the passing of Supreme Court Justice Antonin Scalia on February 13, President Obama announced that he would nominate an “indisputably qualified” candidate to take Scalia’s place. Apparently to many House republicans, “indisputable” is indeed, disputable. And while it’s all well and good to take your time evaluating the credentials of a person who could feasibly be making important decisions for the country for the next forty-plus years, refusing outright to look at any nominees is obstructionist nonsense. As with most political nonsense, members of Congress are finding excuses for their actions. Here are a few of their “reasons” behind that un-constitutional garbage, each dumber than the last:

Several GOP candidates have cited “The Thurmond Rule” as a reason to avoid appointing a new justice in an election year. For the unfamiliar, here’s a recap on the person behind The Thurmond rule:

Strom Thurmond, a South Carolina senator, was one of the most aggressive segregationists in modern American history. This is a man who never fully renounced his belief in segregation all the way to his death in 2003. That’s right, iPods existed, and this influential man still didn’t dial back his position that black people and white people should use separate bathrooms. This is a man who impregnated his family’s sixteen year-old black maid, fathered an illegitimate mixed-race daughter, and secretly paid for her schooling while railing against her right to share a bus seat with a white person.  This is a man who makes George Wallace look like Beyoncé Knowles.

So now that we’ve gotten a quick re-cap on the historically heinous opinions of Mr. Thurmond, we can understand just how much weight we should give his opinion on Supreme Court Nominations. And while people refer to Thurmond’s argument as a “rule,” it’s really just one guy’s suggestion. That suggestion is that the Senate should not nominate a Supreme Court justice. And even if we were to take this rule of thumb as the letter of the law, we’d need to look at Thurmond’s exact quote. In a moment where he wasn’t disparaging ethnic minorities, he said: “No lifetime judicial appointments should move in the last six months or so of a lame-duck presidency.”

Barack Obama has over eleven months left in his presidency, and nine months until the presidential election. By any measure, that’s more than six months, and this rule of thumb shouldn’t apply.

In a cart-before-the-horse argument, Rand Paul said that Obama should not be allowed to appoint a justice, because potential nominees would support the Presidents’ own issues facing the Supreme Court, such as his executive actions concerning immigration, and his climate change regulations.

There will always be a potential for a president to choose a nominee who supports the same interpretation of the law as they do. In fact, the court’s more conservatives justices; Alito, Thomas, Roberts, and formerly Scalia, were all appointed by Republican presidents. The more liberal justices, Ginsburg, Sotomayor, Kagan, and Breyer were all appointed by Democratic presidents. That’s kind of just how it works. Obviously it works in the President’s own favor to elect a similarly-minded justice. That’s why we democratically elect a president whose political ideologies align best with the majority of Americans–so that his political decisions won’t be subject to an arbitrary whim.

Here’s the thing: if Obama picks a strongly biased or crony nominee, that person won’t make it through the Senate’s approval. That’s the check on Obama’s power that already exists, and which should be used regardless of political affiliation to make sure that the person nominated is qualified, and not unduly biased.

Thankfully, Paul qualified his argument to be less resolute “It’s going to be very, very, very difficult to get me to vote for a presidential nomination from this president,” he said. “I will look at it if it comes down, but my threshold for voting for somebody is going to be very, very high.” I’d hope that his threshold would he high regardless, and not exceptionally high simply because a Democrat is in office. We’ll have to see how he ends up voting.

3. We Owe It To Scalia / There’s No Precedent

We’ve heard a lot from GOP presidential candidates about honoring Justice Scalia’s legacy, How do you best honor the passing of a strict originalist? By ignoring the text of the constitution, of course.

Senate Majority Leader and alleged turtle Mitch McConnell responded to Scalia’s death by saying “This vacancy should not be filled until we have a new president.” But Scalia was known for his very literal reading of the constitution.

If Scalia had been asked about the nomination for his successor, he’d pull out his pocket-sized (but never abridged) copy of the Constitution, and zero-in on article II, Section 2. That section says “[The president] shall nominate, and by and with the advice and consent of the Senate, shall appoint … judges of the Supreme Court.” Then Justice Scalia could slap Mitch McConnell across the face with that Constitution for misrepresenting the founders’ original intent.

Unfortunately in his absence, we have candidates decrying that there’s no precedent for a Supreme Court appointment in an election year, and that there’s no time for a candidate to be vetted. The only trouble with those arguments are that they are just not true. For one, there have indeed been Supreme Court appointments during an election year, as NPR explains brilliantly in its rundown of SCOTUS history.

And the notion that there’s no time is also unfounded. The longest Supreme Court Justice nomination took 125 days, after Louis D. Brandeis was confirmed in 1916. Actually, if the Senate waited until our 45th president nominated a Supreme Court Justice, the country would endure the longest vacancy on the court in the last thirty years: well above the earlier record of 237 days.

No matter how you slice it, President Obama is well within his constitutional rights to appoint a Supreme Court Justice of his choosing, so long as the Senate fulfills its constitutional obligation to fairly assess and vet the nominee. All of the reasons presented by these legislators are simply excuses for being deliberately obstructive to the legal procedure mandated by the Constitution.