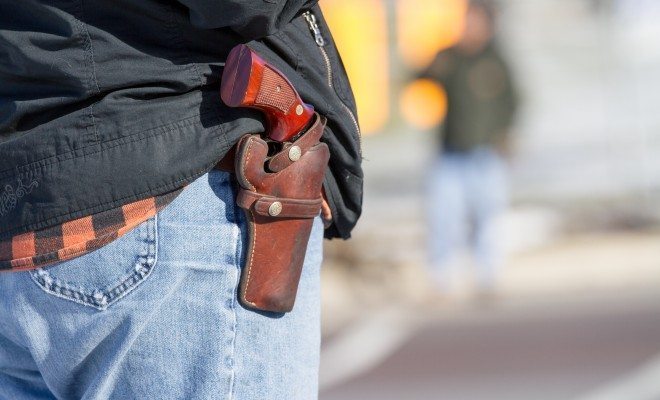 Hold on to your holsters, folks–there’s a new gun law in Texas. As of January 1, 2016, licensed owners of firearms will be able to carry them in plain view in most places. People will actually be able to flaunt and parade their firearms in belt and shoulder holsters in public…at restaurants, bars, parks, and stores–for every person to witness. It begs the question, is it necessary to expose one’s weapon in public spaces in light of laws allowing for weapons to be carried so long as they are concealed? And if it is necessary, why?

Earlier this year, on June 13, 2015, Governor Greg Abbott (R) signed the open carry bill into law. It passed in the Texas House by a margin of 102-43 votes and in the Senate by 20-11, divided by party lines with Democrats opposing the bill. Visible handguns have been banned in Texas since just after the Civil War, but that will change with the new law taking effect by the start of the New Year.

Despite its Wild West history of cowboys, bandits, John Wayne, and fairly lax gun laws, Texas is pretty late to flex the open carry facet of its Second Amendment arm. Surprisingly, it is the 45th state to enact such legislation, but only after a provision barring law enforcement from asking Texas residents whether they were licensed or had a proper license to carry firearms visibly was removed from the bill. Texas is by far the most populous state with the open carry laws, with nearly 850,000 concealed license holders, thereby making it a notable change regarding the nation’s gun laws as a whole.

Thankfully, the law allows for private businesses and establishments to ban open carry and many have been on the fence about the direction in which they will go. A number of family-based restaurants have geared up to ban visible weapons within their establishments. They fear that families with children and other customers would be “a little uncomfortable” coming to a restaurant that has firearms in plain view. Additionally, H-E-B, a grocery store chain with 316 stores in 150 Texas communities, has also decided to ban open carry within its store. Largely staying out of the debate, H-E-B noted that it sells alcoholic beverages and are acting in accordance to state regulations on that basis. The store, for years, has maintained the policy that long guns and unlicensed guns are prohibited on its property. But it allows concealed weapons and will continue to do so. Whole Foods and Randall’s have followed H-E-B’s suit in banning open carry within their stores.

Other organizations have taken a different stance. Kroger, another grocery chain, will allow open carry within its stores, as will the First Baptist Church of Arlington, near Dallas, Texas. Senior Pastor Dennis Wiles, who sees approximately 2,500 worshipers on Sundays, noted that he came to the decision after meeting with the church’s legal team, congregants, and police officers. Wiles further recognized that the church will re-assess the situation in a couple of months to see if there are any issues to be address, however, he is confident that there won’t be much of a noticeable difference. Executive Director Charley Wilkison of the Combined Law Enforcement Associations of Texas does not agree. Wilkison stated that, “[p]eople will drive without a license…[a]nd we can sure count on them to carry a weapon without training or license.”

But we still don’t know why. Why is this necessary? Intimidation? Self defense? Fashion? What good will come of this? Furthermore, if individuals are entitled to carry concealed weapons, why the additional need to flaunt those weapons, particularly at a time when citizens have been plagued by mass shootings, police brutality, racial discrimination, and religious intolerance? Placing firearm intimidation on the forefront of unstable societal, racial, and economic tensions does not sound like positive and commendable progression toward stability in such a gun weary and gun polarized nation.

Ajla Glavasevic
Ajla Glavasevic is a first-generation Bosnian full of spunk, sass, and humor. She graduated from SUNY Buffalo with a Bachelor of Science in Finance and received her J.D. from the University of Cincinnati College of Law. Ajla is currently a licensed attorney in Pennsylvania and when she isn’t lawyering and writing, the former Team USA Women’s Bobsled athlete (2014-2015 National Team) likes to stay active and travel. Contact Ajla at Staff@LawStreetMedia.com.
Share:
Related ItemsGovernor Greg AbbottGun LawsGun RegulationsOpen carrySecond AmendmentTexas