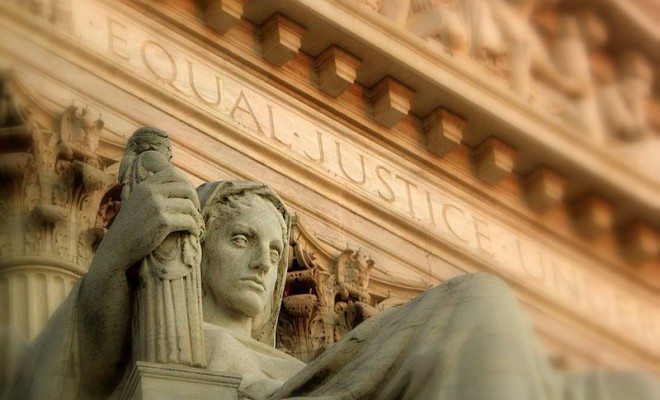 The Two Supreme Court Cases We Should All Be Watching

Two high-profile decisions will impact millions of lives this month, including millions of millennials, as the U.S. Supreme Court issues its opinions on ObamaCare and same-sex marriage. These cases face what many regard as the most conservative court in decades, but center on two of the most prominent and progressive social justice movements in decades. At a recent Center for American Progress (CAP) event focused on the important cases of this term, I was able to hear the implications of these cases, and they’re definitely worth our attention. In the justices’ hands rests the future and stability of the American health care system and legality of marriage equality for all. The stakes couldn’t be higher this month, and that’s exactly why you should be informed of what’s going on. Here’s a breakdown—in plain English—of what you need to know:

Just because you’re young and healthy doesn’t mean you don’t need health insurance, and this particular court case will definitely impact young people. A little background is important to grasp how, though. The Affordable Care Act (ACA) was signed into law in March 2010. It established health insurance exchanges–marketplaces that facilitate the purchase of health insurance in each state. Exchanges provide a set of government-regulated, standardized health care plans from which individuals may purchase health insurance policies. If the individual has a limited income, the exchange allows that person to obtain premium assistance (AKA: premium subsidies) to lower the monthly cost of the health care plan, making the plan affordable.

The ACA provides states three options for the establishment of exchanges: state run exchanges, a partnership with the federal government, or complete federal control of the exchange within the state. In 2014, appellants in Virginia, D.C., Oklahoma, and Indiana argued that premium subsidies are only available under a state-run exchange, citing one clause that says that premium subsidies are available “through an Exchange established by the state.” Using this phrase, litigants argue that the ACA provides premium assistance exclusively to individuals purchasing health care on state-run exchanges.

The Fourth Circuit Court of Appeals rejected that argument, saying that the context of the phrase reveals that Congress obviously intended for the subsidies to apply in all exchanges. But in July 2014 David King, a Virginia resident, and his co-plaintiffs  petitioned the Supreme Court and in November, the court agreed to accept the case. Oral arguments were in March 2015 and in June the outcome will be released, which has the potential to strike a detrimental blow to the Affordable Care Act. Since the ACA was signed into law, thirty-four states chose not to set up their own exchange marketplace and instead allow the federal government to operate the exchange, accounting for 75 percent of the people nationwide who qualify for premium subsidies. If the Supreme Court reverses the previous decisions and rules that only state-run exchanges qualify for premium assistance, that 75 percent will no longer be considered eligible for assistance. If the Court rules against the Obama Administration this month, about 6.4 million Americans could lose their health care premiums.

But there’s no certainty which way this will go. At the panel discussion on Monday at CAP, Elizabeth G. Taylor, Executive Director at the National Health Law Program expressed her skepticism of the Supreme Court’s decision to hear this case. “What I fear is that not only do we not have an activist court, but that it is standing in the way of efforts by publicly-elected officials to name and address social problems.” Ian Millhiser, Senior Fellow at CAP, argued that the King v. Burwell case is the “weakest argument that I have ever heard reach the Supreme Court.”

It’s especially important to keep in mind that young people will be disproportionately impacted by a SCOTUS ruling against Obamacare; over 2.2 million enrollees are between the ages of 18-34, making millennials the largest group insured under the ACA. For example, a decision against the ACA could cause young people under the age of 26 (who are automatically covered under their parents’ plans, thanks to ObamaCare) to lose their health care plans if their parents can no longer afford health insurance without federal subsidies. Whether or not SCOTUS protects those Americans remains to be seen.

Obergefell v. Hodges – the case #SCOTUS is considering, whether #LGBT couples have a constitutional right to marry http://t.co/FCJ6yo0ZGD

Again, this decision will be important for young people, particularly because of the part we’ve played in the debate. Of Americans under age 50, 73 percent believe in marriage equality. Roberta A. Kaplan, Partner at Paul, Weiss, Rifkind, Wharton & Garrison LLP, stated at the CAP event Monday that the arguments in favor of marriage equality have remained the same over the years, but what has changed is the ability of judges to hear those arguments. “There’s no doubt that what made this change is the American public,” she said. While the Supreme Court does not exist to respond to the public, it certainly appears to be aware of the momentum behind the marriage equality movement. Just weeks after Ireland became the first country to legalize same-sex marriage on a national level by popular vote, SCOTUS will issue an opinion that could put the U.S. in the same progressive bracket as 18 other countries, allowing same-sex couples to marry nationwide.

Regardless of the decision though, the fight for equality won’t be over. Let’s say the Supreme Court rules in favor of marriage equality both ways. States will be required to marry same-sex couples and recognize marriages performed out of state. But the next concern for these couples is the potential for more subtle discrimination. “Same sex couples will be allowed to marry but states will be able to discriminate in other ways,” warned Millhiser. Losing jobs, healthcare, or being denied housing and loans without explicitly stated homophobic motivations are classic examples of discrimination that could very well be implemented on the state level by authorities who are adamantly against same-sex marriage. If the ruling does come out in favor of gay couples, increasing skepticism is a must to keep unlawful, prejudiced actions in check.

Both of these cases have a lot on the line, although obviously for very different reasons. Michele L. Jawando, Vice President of Legal Progress at CAP said, “I would like to believe that the court is paying attention, and I do believe that the American people have a role to play when it comes to these decisions.” This is where you come in. Speaking loudly and acting louder can truly change the course of history. Lobbying Congress, rallying for your cause, educating yourself and speaking out to educate the public on the importance of these issues are crucial methods of putting public and political pressure on the justices. I’d like to believe that the American Constitution is a living and breathing document that transforms throughout history, expanding to encompass progressive views and constantly redefining what it means to be an American; let’s hope I feel the same way at the end of June.

The Supreme Court upheld a key portion of the Affordable Care Act today, ruling that the ACA provides premium assistance to individuals purchasing health care on both federal and state-run exchanges. This is a victory for about 6.4 million Americans who would have lost their health care premiums had the Court ruled in favor of the plaintiff.