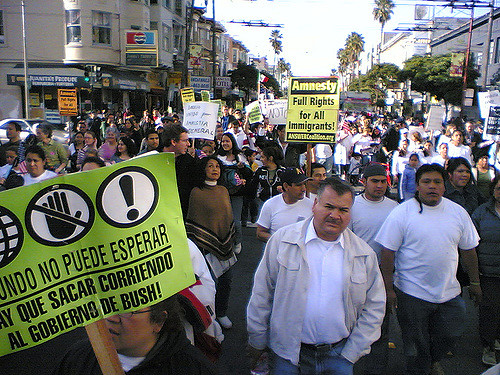 A lawsuit challenging Texas’ controversial immigration law made its way to a federal court in San Antonio on Monday.

SB4, which Governor Greg Abbott signed into law on May 7, essentially bans “sanctuary cities” in Texas. While the law does not specifically mention the phrase “sanctuary city,” it does punish local governments, officials, and police who adopt, enforce, or endorse a policy that “prohibits or materially limits the enforcement of immigration laws.” The law is slated to go into effect on September 1.

According to the law, those entities and individuals may not prohibit “peace officers” from asking a person who is lawfully detained or under arrest about their immigration status or place of birth. They also may not impede peace officers from cooperating with a federal immigration officer, or permitting a federal immigration officer to enter a jail to conduct enforcement activities. If they fail to comply with immigration laws, local governments can face fines of up to $25,500 per day of non-compliance, officials may be forced to give up their positions, and police chiefs can be charged with misdemeanors.

The plaintiffs in the lawsuit include the City of El Cenizo, Texas; Mayor Raúl L. Reyes of City of El Cenizo; Maverick County Sheriff Tom Schmerber; Maverick County Constable Pct. 3-1 Mario A. Hernandez; and the League of United Latin American Citizens (LULAC). They filed a lawsuit against the defendants–the state of Texas, Abbott, and Texas Attorney General Ken Paxton–one day after the governor signed SB4.

The lawsuit claims that SB4 puts Texas and its local government officials and entities “at the complete mercy of federal officials,” and violates the Tenth Amendment and due process clauses of the Fifth and Fourteenth Amendments of the United States Constitution. The lawsuit asserts that Texas “may choose to voluntarily relinquish its retained sovereignty entirely to the federal government,” but cannot force local governments to do so.

The Department of Justice filed a statement of interest on June 23 supporting Texas in the litigation. According to a press release from the DOJ that same day, United States Attorney General Jeff Sessions explained that the DOJ is participating in the lawsuit to facilitate state and local cooperation with national immigration laws.

“President Trump has made a commitment to keep America safe and to ensure cooperation with federal immigration laws,” Sessions wrote in the press release. “Texas has admirably followed his lead by mandating state-wide cooperation with federal immigration laws that require the removal of illegal aliens who have committed crimes.”

In a CNBC commentary piece about SB4, author Julissa Arce expressed her opposition to the law. “SB4 is essentially a ‘show me your papers’ law that is set to create an environment for racial profiling in a state where 10.4 million Hispanic Americans live,” wrote Arce, who is also the co-founder of Ascend Educational Fund, a nonprofit in New York City that provides scholarships to students regardless of their ethnicity, national origin, or immigration status.

Arce expressed hope that the court will rule in favor of the plaintiffs and protect immigrants regardless of their immigration status.

“I believe the Texas that led the country in giving undocumented students an opportunity at higher education, my home state, is the state that will ultimately prevail,” she wrote.

SB4 opponents spoke out against the law at a protest in San Antonio on Monday.

Undocumented youth have come from all over Texas to stand up for communities of color and against SB4. #HereToStay #SB4isHate pic.twitter.com/ut41Wtn8rz

On 2nd anniversary of #MarriageEquality I’m proud to be #undocumented & #queer fighting racist laws like #SB4 in TX! #Pride2017#HereToStay pic.twitter.com/PaMnvq4Fry

Among the crowd were Austin Mayor Steve Adler, and members of the San Antonio and Austin city councils.

Austin Councilman @GregCasar speaks to protestors against #SB4 this morning before federal judge hears both sides. “Alright let’s do this.” pic.twitter.com/5rrkRtFXoi

“We will not accept overt racism embedded in #SB4. Not today not ever.” @LUPE_rgv outside of the courthouse to #BlockSB4#SB4isHatepic.twitter.com/iAYPoHMKPI

U.S. District Judge Orlando Garcia, who heard the case, declined to make a decision on Monday, according to the Texas Tribune. It is not yet clear when a decision will be handed down.

That same morning, Reverend Jim Rigby, a pastor at St. Andrew’s Presbyterian Church of Austin, was charged with a criminal trespassing misdemeanor after he was arrested on May 1 for protesting SB4 in a state office building. Rigby was among about 20 protesters, including immigrants, students, and Austin City Council Member Greg Casar, who were arrested in May for protesting the law.

On May 8, the day after Abbott signed SB4 into law, Paxton filed a lawsuit to uphold the constitutionality of the law. That case will be heard Thursday. These lawsuits could have a huge impact on undocumented immigrants in Texas and set a precedent for other areas that have designated themselves as “sanctuaries.”

Marcus Dieterle
Marcus is an editorial intern at Law Street. He is a rising senior at Towson University where he is double majoring in mass communication (with a concentration in journalism and new media) and political science. When he isn’t in the newsroom, you can probably find him reading on the train, practicing his Portuguese, or eating too much pasta. Contact Marcus at Staff@LawStreetMedia.com.
Share:
Related ItemsAttorney General Jeff SessionsConstable Mario A. HernandezConstitutional Law NewsEl CenizoGovernor Greg AbbottImmigration LawJulissa ArceMaverick CountyMayor Raul L. ReyesSB4Sheriff Tom SchmerberTexasUndocumented Immigrants