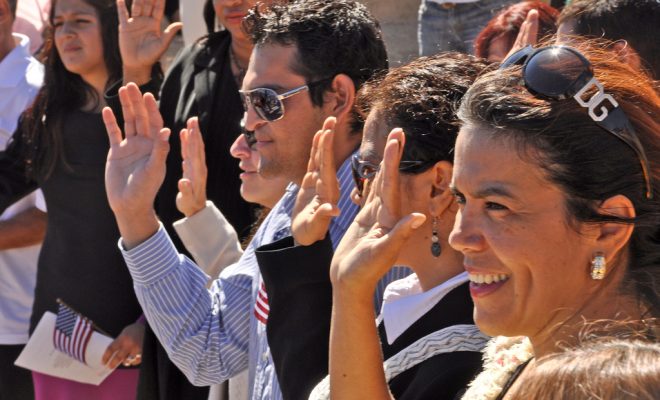 On Thursday, the Supreme Court made it more difficult for the government to strip a naturalized American’s citizenship simply because he or she lied during the naturalization proceedings. The case, Maslenjak v. United States, concerns an ethnic Serbian woman who, fleeing war and prosecution from Bosnia in the 1990s, was granted refugee status in the U.S. in 1999. In 2007, she became a citizen, despite lying about her husband’s service in the Bosnian Serb military.

The court’s unanimous decision largely hinged on the standard on which the case was argued and ruled on by the lower courts. Namely, that any sort of lie, no matter its causal link or lack there of to the granting of citizenship, is enough to revoke a naturalized American’s citizenship. That is how the Justice Department’s lawyer, Robert Parker, argued the case. Those were the grounds on which a district court and the Sixth Circuit Court of Appeals in Cincinnati ruled. Both sided with the government.

But the Supreme Court fundamentally disagreed that a naturalized citizen’s rights could be revoked based on an immaterial falsehood. It sent the case back to the Sixth Circuit, allowing it to be reviewed on a different standard.

“We hold that the government must establish that an illegal act by the defendant played some role in her acquisition of citizenship,” Justice Elena Kagan wrote in the unanimous opinion. She continued:

When the illegal act is a false statement, that means demonstrating that the defendant lied about facts that would have mattered to an immigration official, because they would have justified denying naturalization or would predictably have led to other facts warranting that result.

The story begins in 1999, when Divna Maslenjak was granted refugee status. An ethnic Serb fleeing what was then known as Bosnia, Maslenjak said Muslims would mistreat her and her husband because of their ethnicity. At the same time Serbs would punish them because her husband, she claimed, evaded military service. In 2007, Maslenjak and her husband were granted citizenship.

The Supreme Court’s decision vacates the lower courts’ rulings. In unanimously rejecting the government’s assertion that any lie, regardless of its relevance to citizenship, could lead to revocation, the court strengthened protections for naturalized Americans.

In April, during the arguments for the case, the justices seemed perplexed at the government’s position. In fact, Chief Justice John Roberts confessed to a past misdeed to make a point. “Some time ago, outside the statute of limitations, I drove 60 miles an hour in a 55-mile-an-hour zone,” he said.

If on the citizenship form he answered “no” to the question of whether he had ever committed an offense, Roberts asked Parker, “20 years after I was naturalized as a citizen, you can knock on my door and say, ‘Guess what, you’re not an American citizen after all?” Parker continued to baffle the justices, saying, “If we can prove that you deliberately lied in answering that question, then yes.”