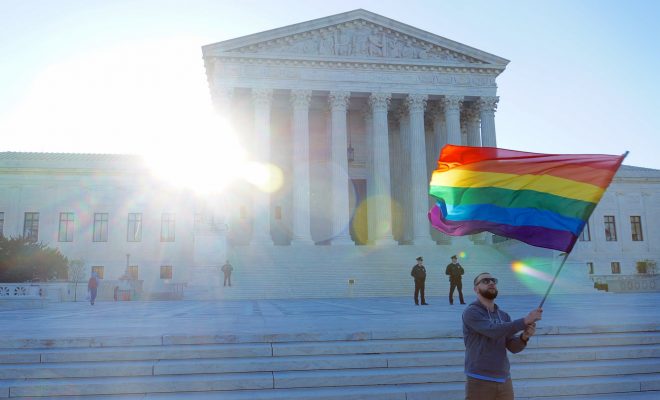 A federal appeals court in Chicago on Tuesday ruled that discrimination on the basis of sexual orientation in the workplace is a violation of the 1964 Civil Rights Act. The 8-3 decision is unprecedented, as all other federal appeals court rulings have sided with employers. The Supreme Court has never heard a case on the issue.

The case, Kimberly Hively vs. Ivy Tech Community College of Indiana, centers around a professor in South Bend, Indiana. Openly lesbian, Kimberley Hively had been working as a part-time professor at Ivy Tech’s South Bend campus from 2000 to 2014. Six times between 2009 to 2014, Hively applied to full-time positions at the college. She was denied an interview all six times and, in July 2014, the college did not renew her part-time contract.

Hively sued the college, but a federal district court ruled in favor of Ivy Tech. Tuesday’s decision vacates the lower court’s decision. Federal law, under the 1964 Civil Rights Act, prohibits discrimination based on race, color, religion, sex, and national origin. Discrimination based on sexual orientation, the Seventh Circuit Court of Appeals ruled on Tuesday, is also protected by federal law.

Writing for the dissenting opinion, Judge Diane Sykes said the ruling was “momentous,” and amounted to “the circumvention of the legislative process by which the people govern themselves.” Sykes, who President Donald Trump reportedly considered nominating to the Supreme Court, continued: “We are not authorized to infuse the text with a new or unconventional meaning or to update it to respond to changed social, economic, or political conditions.”

For Hively and the LGBT community, however, the ruling was “momentous” for different reasons. “Federal law is catching up to public opinion: 90 percent of Americans already believe that LGBT employees should be valued for how well they do their jobs, not who they love or who they are,” said Greg Nevins, a member of the LGBT rights group Lambda Legal, which represented Hively in the case. “Now, through this case and others, that principle is backed up by the courts.”