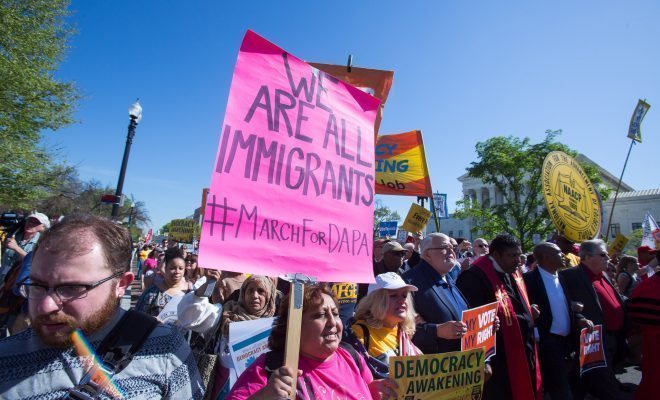 The decision: With the court in a 4-4 split, the decision of the Fifth Circuit is upheld, blocking president Obama’s executive action on immigration, namely DAPA and the expansion of DACA.

So what are DACA/DAPA?

DACA (Deferred Action for Childhood Arrivals) is an initiative launched in 2012 as an act of prosecutorial discretion by president Obama. The order allows undocumented immigrants who move to the United States before the age of 16 to seek temporary relief from deportation given they meet criteria for age, arrival time, criminal record, and schooling.

The expansion of DACA (or DACA+) was authorized by President Obama in 2014 that eliminates certain arrival timeline requirements, the age ceiling, and extends relief period from two years to three years.

DAPA (Deferred Action for Parents of Americans) is also an initiative launched in 2014 that would allow parents of U.S. citizens and permanent residents to seek temporary relief from deportation and apply for work permits.

These executive actions were intended to allow deportation officials to focus on illegal immigrants who engage in criminal behavior and thus threaten public safety, while allowing other immigrants who do not have legal status but have vested interests in the United States (for example, if they spent their childhood here or  have a child who is a citizen) to stay for a temporary period.

How did the lawsuit begin?

The lawsuit came to fruition when 26 states sued the federal government claiming that DAPA/DACA+ violated the Administrative Procedure Act by not allowing a notice-and-comment period during rulemaking.

When the states took the case to district court in February 2015, Judge Andrew S. Hanen issued a preliminary injunction, prohibiting further action on DAPA/DACA+ indefinitely. In November 2015, the Fifth Circuit Court of Appeals upheld the district court’s order to grant a preliminary injunction. The federal government filed a petition for certiorari later that month and the Supreme Court decided to take up the case in January. The Supreme Court also decided to consider whether DAPA/DACA+ violated the “Take Care Clause” of the Constitution.

Check out this article to read more about the case’s background.

What does today’s tie mean?

The deadlocked ruling in United States v. Texas affirms Fifth Circuit Court’s decision to block the president’s executive actions. Today’s ruling amounted to just one sentence: “The judgment is affirmed by an equally divided Court.” As a result, as many as five million undocumented immigrants will no longer be protected from deportation

Because the court did not actually decide on the case but rather affirmed the affirmation of an indefinite suspension of a program, the future of DAPA/DACA+ is obviously ambiguous. Immigration advocates find it unfair that the Court of Appeals for the Fifth Circuit would be able to determine immigration policy for the whole country. Some also speculate that another group of states will sue in favor of the actions, which could create a split between appellate courts while the Supreme Court remains deadlocked in a tie.

If the decision remains through the 2016 election, the future of DAPA/DACA+ and immigration policy will be decided by the next president or it may require a ninth Supreme Court justice to break the tie.

You can read the (very brief) opinion here.

Ashlee Smith
Ashlee Smith is a Law Street Intern from San Antonio, TX. She is a sophomore at American University, pursuing a Bachelor of Arts in Political Science and Journalism. Her passions include social policy, coffee, and watching West Wing. Contact Ashlee at ASmith@LawStreetMedia.com.
Share:
Related ItemsDACADAPADeportationExecutive OrdersImmigrationObamaSupreme Court