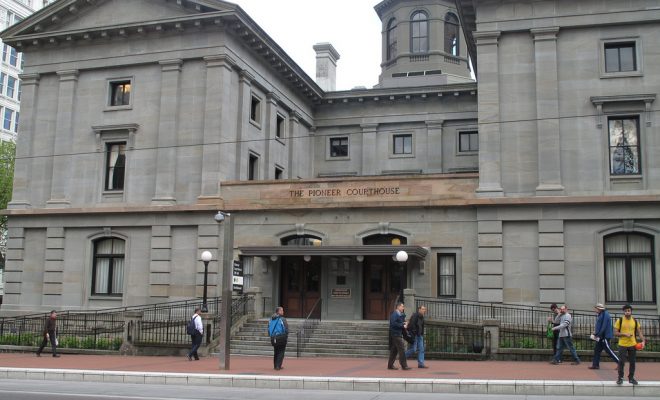 The incredible saga of the Bundy brothers continues. Ammon and Ryan Bundy, and the five other people who have been on trial for an armed takeover of an Oregon wildlife refuge in January, were acquitted of all charges on Thursday. Even though the six men and one woman took over federal property for six weeks while armed, the Portland jury agreed that they are not guilty of impeding federal workers from getting to work, which was the official charge. The verdict has many people upset and comparing it to the ongoing Dakota Pipeline protest where Native American protesters have been attacked with dogs and pepper spray, while these white protesters were acquitted despite being armed.

Imagine if these defendants were black or Muslim… there would not have been a trial. https://t.co/AYAT9738Kk #crimingwhilewhite #Bundy

Even the defendants’ lawyers were surprised at the outcome. “It’s stunning. It’s a stunning victory for the defense,” said Robert Salisbury, attorney for defendant Jeff Banta. “I’m speechless.” The Bundy brothers themselves will remain jailed awaiting another trial in Nevada for an armed standoff that took place in 2014. In that case, the charges are more serious, involving felony weapon and conspiracy charges. After hearing the verdicts from Judge Anna J. Brown, an attorney for Ammon Bundy, Marcus Mumford, threw a tantrum in the courtroom and yelled at the judge to release his client until guards tackled him to the ground using a stun gun. He was then also arrested.

Prosecutors argued that the group used threat of violence to occupy the wildlife refuge, which doesn’t sound that unbelievable considering they were armed and refused to leave. But the defendants said they were simply peacefully protesting government control–even though they urged others to bring their firearms and join them. The whole thing is believed to have cost taxpayers more than $3.3 million and ended dramatically when one participant, Robert “LaVoy” Finicum, was fatally shot by police during a chase when he refused to give up.

Bundy Brothers acquitted. Officially have no hope for this judicial system anymore.

The National Wildlife Federation condemned the verdict in a statement:

This was not a peaceful protest; this was occupation by gunpoint and it assaulted the very foundation of our democracy, our Constitutional principles, and our shared public lands heritage. These criminals prevented Americans from enjoying the wildlife that belong to all of us, destroyed refuge infrastructure, degraded wildlife habitat, and desecrated archaeological treasures. In a democracy, disagreements must be resolved through collaboration, debate or the courts, not by brute force.

The question is how they could be found not guilty of preventing federal employees from accessing their workplace when that is precisely what they did. One of their key aims was to get the federal government to give up some of the land it owns to locals, another was to protest the conviction of two men who were found guilty of arson on government land. Those men, Dwight and Steven Hammond, turned themselves in to serve their sentences and said they didn’t want the Bundys’ help, but still became the catalyst for the whole armed standoff.

The next step is the Nevada trial for the Bundy brothers early next year, as well as another Oregon trial for seven participating defendants who chose to postpone their hearings until February.

Emma Von Zeipel
Emma Von Zeipel is a staff writer at Law Street Media. She is originally from one of the islands of Stockholm, Sweden. After working for Democratic Voice of Burma in Thailand, she ended up in New York City. She has a BA in journalism from Stockholm University and is passionate about human rights, good books, horses, and European chocolate. Contact Emma at EVonZeipel@LawStreetMedia.com.
Share:
Related ItemsAcquittalArmed StandoffBundy BrothersBundy TrialOregon Wildlife RefugePortlandTrial