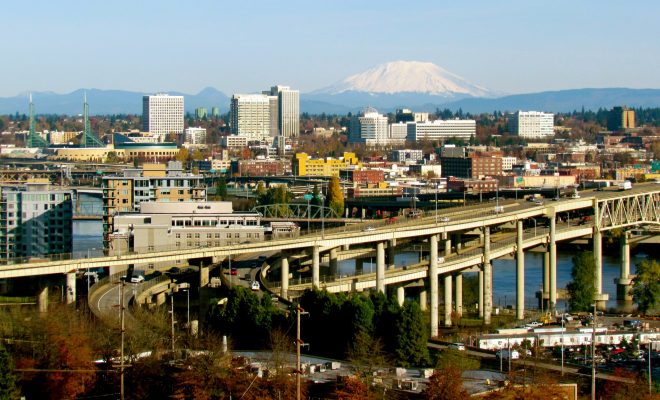 Protests in Portland, Oregon, erupted Sunday after two men were murdered in the city last week while trying to defend young girls from anti-Muslim taunts on a train.

On one side of the Portland protests was a free speech rally for supporters of President Donald Trump. It was organized by conservative group Patriot Prayer, led by Joey Gibson, a self-described “Libertarian and a Christian.” The rally of Trump supporters, located near city hall, led to two counterprotests–a rally originating from an anti-fascist group and a “Portland Stands United Against Hate” rally.

A heavily protected police force, along with Homeland Security officers, stood between the two sides. After violence broke out, police said that officers had been assaulted.

A small group of Buddhists silently joined the Portland protests, according to the Washington Post.

The groups were given protest permits despite Portland Mayor Ted Wheeler’s plea to the federal government to revoke the permission.

“Our city is in mourning, our community’s anger is real, and the timing and subject of these events can only exacerbate an already difficult situation,” Wheeler posted on Facebook.

During an interview with HLN Network, Wheeler clarified that he supports free speech no matter the topic, but believed that the timing was a threat to public safety.

While the Trump supporters argued that their rally was simply to promote the First Amendment, the other side viewed it as an endorsement of the aforementioned train stabbing.

Jeremy Christian, the suspect in the murder case, brought free speech to the forefront of his trial as he entered the courtroom on May 30.

“Get out if you don’t like free speech!” he shouted.“You call it terrorism; I call it patriotism. Die.”

Christian had been seen at previous alt-right rallies in Portland, performing Nazi salutes and screaming racial slurs, according to the Washington Post.

Despite a large police presence separating the protesters, violence erupted throughout the day. The Portland Police Department made 14 arrests at a “variety of locations” and confiscated various weapons, including bricks, hammers, and hunting knives.

The 14 suspects, whose ages ranged from 19-to 64-years-old, were all caucasian. Three got off with citations. The charges include disorderly conduct, carrying a concealed weapon, and interfering with a peace officer. The remaining 11 suspects will be arraigned in court this Friday at Multnomah County Court, according to CNN.

Police say that the situation began with each side hurling insults and names before things escalated. At some point in the day demonstrators began throwing bottles, bricks, and balloons filled with “foul-smelling liquid,” according to USA Today.

Gibson, who claims he disapproves of Christian’s actions both on the train and at previous protests, spoke against violence at the rally.

“I want everybody here . . . to find it in yourself to make this day positive, with no hate and no violence,” he told the crowd. “We have to understand Portland is legitimately shaken up right now.”

Josh Schmidt
Josh Schmidt is an editorial intern and is a native of the Washington D.C Metropolitan area. He is working towards a degree in multi-platform journalism with a minor in history at nearby University of Maryland. Contact Josh at staff@LawStreetMedia.com.
Share:
Related ItemsAnti-FacistFree SpeechPolicePortlandProtestsRalliesTrump Supporters