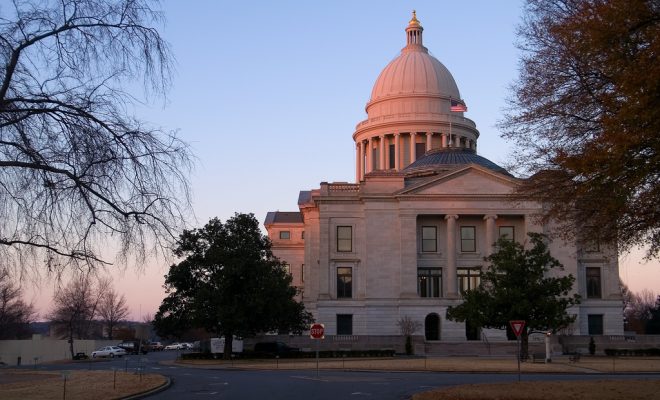 Monday was supposed to be the first day in a string of executions in Arkansas, as the state’s supply of the sedative midazolam, which is used in the lethal injection, expires at the end of the month. That is why Arkansas Gov. Asa Hutchinson ordered eight executions to take place over 11 days, before the current stash of midazolam expires. But a succession of lawsuits has stopped the executions from happening.

This is the latest development in a messy legal fight as Arkansas is pushing to execute eight prisoners in almost as many days. Last month, the eight prisoners filed a lawsuit in which they called the state’s rush to kill them “reckless and unconstitutional.” They also cited the use of midazolam as a problem, as many other states have stopped using the drug after a couple of botched executions that led to slow and painful deaths.

At the end of last week, pharmaceutical companies Fresenius Kabi USA and West-Ward Pharmaceuticals Corp. filed a friend of the court brief in the prisoners’ lawsuit. Fresenius Kabi said it believes that the state of Arkansas acquired potassium chloride, the second ingredient in the three-drug lethal injection, from the company, and that it did so under false pretenses.

On Friday, Arkansas Judge Wendell Griffen halted the use of the third of the three execution drugs, vecuronium bromide. The manufacturer of this drug, McKesson Corporation, also claimed that the state bought it under false pretenses, by using the medical license of an Arkansas physician. Although Griffen’s ruling was not based on the executions legality, it made the carrying out of the executions impossible. And then over the weekend, federal Judge Kristine Baker halted all of the executions, citing the prisoners’ lawsuit.

“The threat of irreparable harm to the plaintiffs is significant: If midazolam does not adequately anesthetize plaintiffs, or if their executions are ‘botched,’ they will suffer severe pain before they die,” she wrote. But on Monday, the 8th U.S. Circuit Court of Appeals overturned her ruling, saying the evidence that the executions would “cause severe pain and needless suffering” was insufficient.

To complicate matters, Judge Griffen was barred on Monday from hearing any death penalty cases in the state as it was revealed that he attended an anti-death penalty rally right after issuing the halt of the lethal injection on Friday. Griffen not only attended the demonstration, he also lay down on a cot and bound himself with a rope, making it look like he was a death row inmate on a gurney, awaiting execution. The protest took place outside Gov. Hutchinson’s house. Death penalty advocates were outraged and many Republican lawmakers called it judicial misconduct.

The hurried pace of carrying out eight executions over 11 days is unprecedented in modern times, and Arkansas hasn’t performed an execution since 2005. But Hutchinson has been eager to get going, citing justice for the families of the victims the inmates have killed. And after all the legal back and forth, it looked like the state could go on with the plans. But then in a last minute development, the Arkansas Supreme Court granted a delay in the execution of one of the prisoners, Don Davis, after his attorney sought a stay on Monday. The court also stayed the execution of Bruce Ward.

Arkansas Attorney General Leslie Rutledge asked the U.S. Supreme Court late Monday evening to overrule that decision. The court declined to hear the case. However, late Monday the Arkansas Supreme Court also overruled the restraining order by Griffen on the use of vecuronium bromide, which means the lethal injections are free to use again. But the state is also facing a different problem: it can’t seem to find enough witnesses for the executions. The law requires at least six civilian witnesses at each execution.

So for now, all the prisoners are still alive. But since Baker’s stay of the executions was overruled, there is nothing that stops the state from going through with the executions, as long as there are enough witnesses. On Thursday, two inmates, Ledell Lee and Stacey Johnson, are scheduled for execution.

Emma Von Zeipel
Emma Von Zeipel is a staff writer at Law Street Media. She is originally from one of the islands of Stockholm, Sweden. After working for Democratic Voice of Burma in Thailand, she ended up in New York City. She has a BA in journalism from Stockholm University and is passionate about human rights, good books, horses, and European chocolate. Contact Emma at EVonZeipel@LawStreetMedia.com.
Share:
Related ItemsArkansasAsa HutchinsonCapital PunishmentConstitutional Law NewsDeath PenaltyDeath RowExecutionsLawsuitsMidazolamSupreme Court