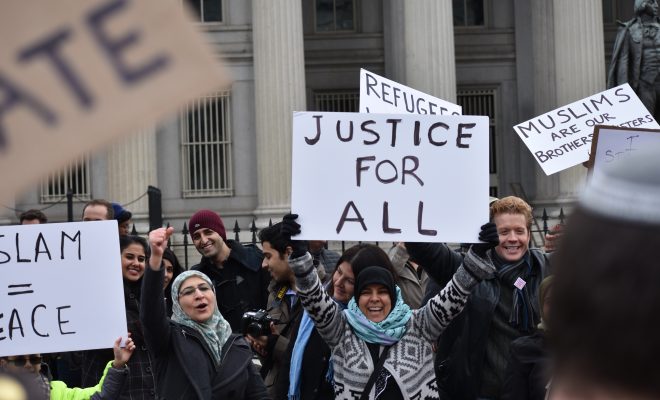 Federal Appeals Court Refuses to Reinstate Travel Ban: What You Need to Know

A federal appeals court late Thursday night affirmed a lower court’s decision to block President Donald Trump’s executive order that banned travel from seven countries to the U.S. The ruling is a blow to Trump’s efforts to clamp down on refugees and immigrants from “terror prone” countries the White House says pose a threat to U.S. security. Trump said the ruling was a “political decision,” and pledged to bring the case to the Supreme Court.

For now, refugees and visa-holders–who have already been vetted and admitted to the U.S. by the Department of Homeland Security–from Syria, Yemen, Iran, Iraq, Sudan, Somalia, and Libya will be allowed to travel and settle in the U.S. Trump’s executive order, issued on January 27, barred refugees from entering the U.S. for at least 120 days, and visa-holders for at least 90 days. Syrians–refugees and travelers–would have been blocked indefinitely.

The U.S. Court of Appeals for the Ninth Circuit, in San Francisco, deliberated for two days before coming to a conclusion. The three-judge panel unanimously agreed that the executive order could violate the Fifth Amendment, which prohibits the government from denying “life, liberty, or property, without due process of law.”

The three judges, appointees of Presidents Barack Obama, Jimmy Carter, and George W. Bush, said: “we hold that the Government has not shown a likelihood of success on the merits of its appeal, nor has it shown that failure to enter a stay would cause irreparable injury, and we therefore deny its emergency motion for a stay.” Trump tweeted his disapproval just moments after the court’s decision:

SEE YOU IN COURT, THE SECURITY OF OUR NATION IS AT STAKE!

The road to the appeals court began last Friday, when a district court judge in Seattle granted a temporary restraining order on the travel ban. That judge, James Robart, sided with the states of Washington and Minnesota, the plaintiffs in the case, and said that because of the travel ban, the states “are likely to suffer irreparable harm in the absence of preliminary relief.” The White House immediately appealed to the court in San Francisco, and after a day of oral arguments and two days of deliberations, the appeals court affirmed Robart’s ruling.

The appeals court was unconvinced by the administration’s argument that the judiciary has no authority to question executive actions involving national security. “It is beyond question,” the decision said, “that the federal judiciary retains the authority to adjudicate constitutional challenges to executive action.” The court did say the government should enjoy deference in matters of national security, but reiterated that those decisions are not “unreviewable.”

The Trump Administration will likely file an emergency appeal to the Supreme Court within the next few days. With the pending confirmation of Trump’s Supreme Court nominee Neil Gorsuch, the court has eight justices, which many consider ideologically split 4-4. If the case ends up in their docket, a 4-4 vote would keep the appeals court’s ruling in place. A Supreme Court hearing and decision could come as early as next week.