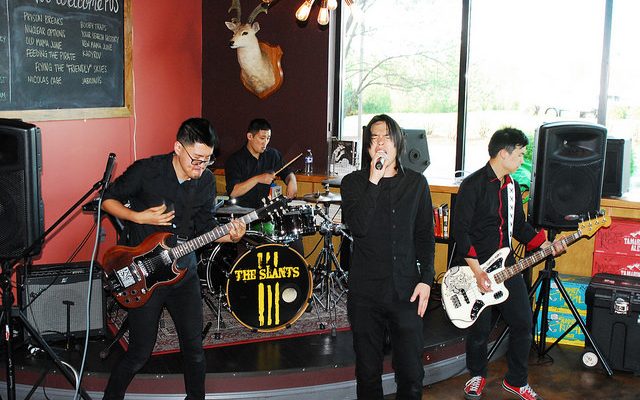 On Monday, the Supreme Court ruled that a law banning the registration of offensive trademarks was unconstitutional. The decision was a victory for the Asian-American dance rock band The Slants–and potentially the Washington Redskins.

Simon Tam, the band’s frontman, filed a lawsuit after the U.S. Patent and Trademark Office (USPTO) denied his application for a trademark for the name “The Slants.” The agency cited the Lanham Act, which prohibits trademarks “which may disparage or falsely suggest a connection with persons, living or dead, institutions, beliefs, or national symbols, or bring them into contempt, or disrepute.”

The court ruled in an 8-0 decision that the “disparagement clause” of the Lanham Act violates the First Amendment’s free speech clause. Justice Samuel Alito, who delivered the majority opinion of the court, said Tam chose the name of the band “to ‘reclaim’ the term and drain its denigrating force.” According to Alito, the ban on offensive trademarks “offends a bedrock First Amendment principle: Speech may not be banned on the ground that it expresses ideas that offend.”

While the justices reached a unanimous judgement, they were split on why they believed it violated the first amendment. In a concurring opinion, Justice Anthony M. Kennedy, joined by Justices Ruth Bader Ginsburg, Sonia Sotomayor, and Elena Kagan, wrote that the measure in question constitutes “viewpoint discrimination.”

Justice Neil Gorsuch did not contribute because he had not yet been confirmed as a justice in January when the court heard the case.

The Slants celebrated the victory with a lengthy statement following the ruling. “The Supreme Court has vindicated First Amendment rights not only for our The Slants, but all Americans who are fighting against paternal government policies that ultimately lead to viewpoint discrimination,” wrote Tam.

Tam said the band never considered itself a political group, but that “the establishment of an Asian American band was a political act in of itself.” As a result, the band has integrated activism into their work by raising awareness and funds for issues affecting Asian Americans.

“Music is the best way we know how to drive social change: it overcomes social barriers in  a way that mob-mentality and fear-based political rhetoric never can,” Tam said.

The Slants’ trademark case could also impact other controversially named groups like the Washington Redskins, which has been in jeopardy of losing its team name for being racially offensive.

In 2014, the Patent and Trademark Office canceled the team’s trademark because the team’s name is a derogatory term for Native Americans. The Redskins appealed the case, but the federal appeals court had delayed hearing it until the Supreme Court ruled in Tam’s case.

“The Supreme Court vindicated the team’s position that the First Amendment blocks the government from denying or cancelling a trademark registration based on the government’s opinion,” said Blatt.

Marcus Dieterle
Marcus is an editorial intern at Law Street. He is a rising senior at Towson University where he is double majoring in mass communication (with a concentration in journalism and new media) and political science. When he isn’t in the newsroom, you can probably find him reading on the train, practicing his Portuguese, or eating too much pasta. Contact Marcus at Staff@LawStreetMedia.com.
Share:
Related ItemsAsian AmericanConstitutional Law NewsDisparagementFirst AmendmentFree SpeechLanham ActSimon TamSupreme CourtThe SlantsTrials NewsWashington Redskins