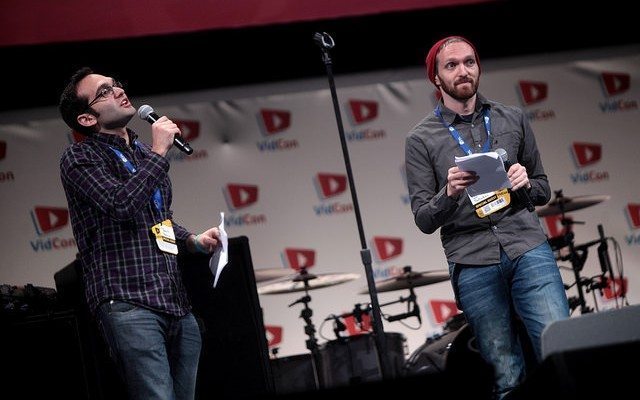 Youtubers Benny and Rafi Fine, otherwise known as “The Fine Bros,” can attribute much of their internet empire’s success to their React series, in which they record and upload videos of kids, teens, adults, and elders hilariously reacting to different things. The series is so successful in fact, that on January 26, the brothers announced plans to license their version’s format for other video makers. But surprisingly they’ve decided to abandon that plan a week later after coming under fire for attempting to trademark several phrases using the word “react.”

Originally Benny and Rafi’s plan was to launch an initiative entitled “React World” that would act as a licensing umbrella for people looking to create their own videos using the bros’ model and graphics. This was designed to prevent people from illegally copying their popular format. However, the problem came when they tried to take it a step further by submitting several trademark applications using the word “react,” in an attempt to control the brand name.

Below is the original video explaining “React World,” followed by the response video to the controversy.

The reason this angered so many people is that react videos comprise a large video subcategory on Youtube, and many feared that allowing the Fine Bros these trademarks would give the pair unfair power in policing the genre.

Officially unsubscribed from FineBros. Can’t believe the greed and selfishness of them.

But in summary should the fine bros have the trademark “react”?
No. No one should have that kind of power over youtube, especially them.

After acknowledging concerns, the pair released a message on the publishing platform Medium late Monday night apologizing to fans and saying,

We realize we built a system that could easily be used for wrong. We are fixing that. The reality that trademarks like these could be used to theoretically give companies (including ours) the power to police and control online video is a valid concern, and though we can assert our intentions are pure, there’s no way to prove them.

As a result, they’ve decided to rescind all “React” trademarks and applications, discontinue the React World program, and release all past Content ID claims. Still, that hasn’t stopped hundreds of thousands of subscribers from unsubscribing. Before the controversy the Fine Bros main account had 14.3 million subscribers, but now that number is down to just over 13.7 million. These huge losses have been widely mocked by critics of the proposal, with some even going as far as livestreaming the channel’s subscriber losses.

The Fine Bros have lot more subscribers in the last 2 days than most YouTubers gain in 2 years. They really messed up. — SullyPwnz (@SullyPwnz) February 1, 2016

It’s pretty clear that the Fine Bros made a huge mistake attempting a T-Swift styled trademark takeover, but they’re not entirely wrong for wanting to license their popular content. Copyright infringement is serious problem in creative fields, but there is a difference between copying someone’s entire format and partaking in the genre. Perhaps, with a better explanation this scandal could have been avoided, but then again, attempting to trademark common phrases is generally met with difficulty.

Alexis Evans
Alexis Evans is an Assistant Editor at Law Street and a Buckeye State native. She has a Bachelor’s Degree in Journalism and a minor in Business from Ohio University. Contact Alexis at aevans@LawStreetMedia.com.
Share:
Related ItemsReactReact WorldThe Fine BrosTrademarkYouTube