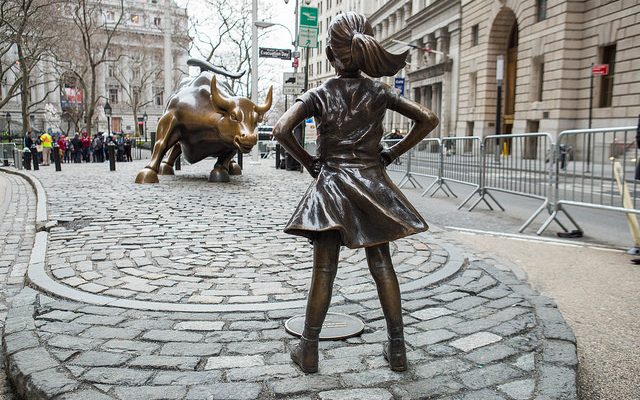 Is the “Charging Bull” Sculptor Right to Want the “Fearless Girl” Removed?

On the eve of International Women’s Day, under the cloak of darkness, a 4 foot 2 inch bronze girl appeared in front of the iconic “Charging Bull” statue in New York City’s Financial District. People quickly took note of the “Fearless Girl,” praising the statue for its symbolism of gender equality in the workplace; however, one man notably took offense. Sculptor Arturo Di Modica, the bull’s creator, says the pint-sized statue violated his rights and distorted the meaning of his sculpture. Now he’s threatening to sue.

Di Modica argues that the clever placement of the Fearless Girl statue was copyright infringement and distorted the meaning of his sculpture. Instead of consulting with Di Modica first, State Street Global Advisors placed the statue created by Detroit-based artist Kristen Visbal there without his permission.

“The statue of the young girl becomes the ‘Fearless Girl’ only because of the Charging Bull: the work is incomplete without Mr. Di Modica’s Charging Bull, and as such it constitutes a derivative work,” wrote Di Modica’s attorneys in a letter Tuesday to Ronald O’Hanley, president and CEO of the investment firm.

State Street Global Advisors commissioned the statue for the anniversary of its Gender Diversity Index SHE, which tracks companies that are gender diverse.

Similar letters were also sent to New York City Mayor Bill de Blasio and McCann Worldwide, which Di Modica’s lawyers’ said developed an ad campaign for the statue. But based on Mayor de Blasio’s Twitter Wednesday, he appears to have sided with the girl statue’s creator.

Men who don’t like women taking up space are exactly why we need the Fearless Girl. https://t.co/D2OZl4ituJ

The Charging Bull first appeared in front of the New York Stock Exchange in 1989 as a guerrilla art installation. The bronzed bull, which took two years to complete, was designed to symbolize the American people’s resilience following the stock market crash of 1987. The city eventually removed the permitless art piece, but it was later reinstalled permanently in Bowling Green Park.

Now, pitted against the independent little girl, Di Modica’s bull looks aggressive and menacing. Instead of being a symbol of American economic strength, it’s become a symbol of gender oppression thanks to Visbal’s pigtailed girl fearlessly staring down the bull with her hands defiantly on her hips. Without the bull, one could argue that the girl–which has become a tourist sensation–wouldn’t have been nearly as popular.

In March, de Blasio announced that the temporary month-long installation would be extended until February 2018 thanks to its overwhelming popularity. But Di Modica wants the statue moved to somewhere else in the city, and is requesting unspecified monetary damages.

Since Di Modica intended for his bull to stand alone, his attorney, Norman Siegel, could argue that the statue violates the Visual Artists Rights Act of 1990. This act grants visual artists the right “to prevent any intentional distortion, mutilation, or other modification of that work which would be prejudicial to his or her honor or reputation, and any intentional distortion, mutilation, or modification of that work is a violation of that right.”

Slate’s Christina Cauterucci noted that this law doesn’t apply to artworks created before the law’s enactment. So in other words, Di Modica will need to find another legal basis for his lawsuit against the city if he chooses to file one. Although, a more optimal solution would be for the city to simply relocate the statue and put the issue to bed.

While Visbal’s statue appears to have been well-intended, it clearly derives its meaning from the Charging Bull, distorting its legacy.