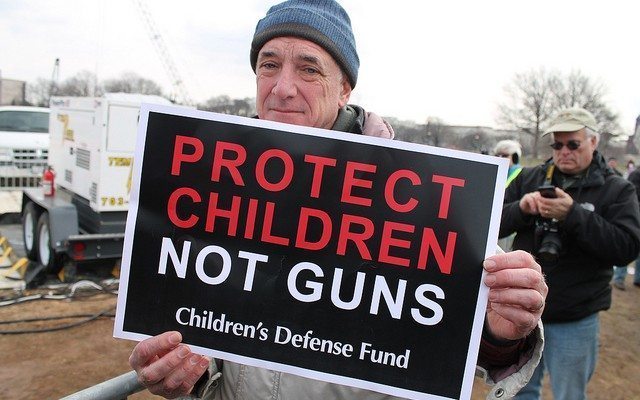 South African comedian Trevor Noah really seems to be coming into his own as the new host of the “Daily Show.” Fresh faced and full of “millennial approved” banter, Noah has confidently revamped the hit satirical news show, while frequently paying homage to his famed predecessor, silver fox Jon Stewart.

However, during last night’s show Noah managed to outdo himself by perfectly tackling two heated issues currently center stage in American politics–abortion and gun control. In the video clip below, Noah criticized “pro-life” GOP primary candidates that fail to fight for gun control, which is also another potentially life-saving measure.

Noah said that “when it comes to restricting access to abortion, they’re killing it.” And he’s right, they are. Despite abortion being legal, anti-abortionists have managed to impose intrusive mandates in some states, such as forced vaginal ultrasounds and mandatory three-day waiting times, that aim to make obtaining an abortion more difficult.

Noah goes on to say,

It’s truly amazing how much the pro-lifers have been able to accomplish in the anti abortion fight. Just imagine what they could do with an issue where the facts are actually on their side?

At this point the segment truly came to life. Noah began by presenting scenarios where pro-lifers negatively addressed efforts to promote gun violence, and then asked “imagine if we could bring some of that pro-life passion into being more pro-life.” He then started swapping in pro-life soundbites from the same candidates as appropriate alternative responses to mass shootings.

Noah’s newscast ended on a somber note with this powerful closing message:

The point is, if pro-lifers would just redirect their power towards gun violence, the amount of lives they could save would reach superhero levels. They just need to have superheros’ total dedication to life, because right now they’re more like comic book collectors–human life only holds value until you take it out of the package and then its worth nothing.

However, not everyone was crazy about the clip. Vox argued that Noah’s segment fails by oversimplifying GOP ideals when it comes to gun control. Vox reporter German Lopez writes,

The fault of Noah’s critique of pro-life conservatives who oppose gun control lies in the fact that they don’t believe gun control can save lives. In fact, many gun rights advocates genuinely believe that gun control can get people killed — since without guns, they won’t be able to, for instance, defend themselves from home invaders.

While his point is valid, it doesn’t make Noah’s point any less so. As a comedian on the “Daily Show,” he’s allowed some leeway when it comes to using hyperbolic statements in order to make a point about a current issue at hand. In a little over a week in Stewart’s former chair, he’s making waves by doing just that. As the presidential race continues to heat up, it will be interesting to see what else Trevor Noah has to say.

Alexis Evans
Alexis Evans is an Assistant Editor at Law Street and a Buckeye State native. She has a Bachelor’s Degree in Journalism and a minor in Business from Ohio University. Contact Alexis at aevans@LawStreetMedia.com.
Share:
Related ItemsAnti-AbortionCarly FiorinaGOPMass ShootingsOregon ShootingPlanned ParenthoodPro-LifeThe Daily ShowTrevor Noah