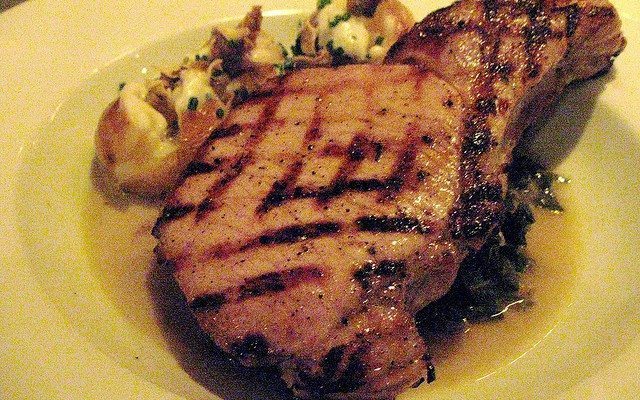 Sometimes, you read about some event and you think, “What?! No way! That’s such a freak occurrence, it could only happen once!” You think this, and then you see Facebook’s related stories and realize that not only did said thing happen once, it happened several times. And then, if you are me, you write about it. That leads us to this week’s topic …

I like to eat as much as the next guy (well, maybe not as much as the next guy if the next guy is any one of the people I’m about to talk about) and when I am really hungry, I get grumpy. I might pout and be snappish and generally act like a five year old, but that is the extent of my ire. I would never attack anyone over food; however, as my Facebook-related stories has pointed out to me, this is a much more common thing than one might think. So here are seven (yes, I have found seven, and I am sure I did not find them all) food fights that you need to know about.

Don’t Mess With Her Pork Chops

A mom in Ohio was arrested earlier this year when she threw knives at her 15-year-old son, hitting his thumb with one badly enough that he had to be taken to the hospital for stiches. What did he do that caused her to get so mad that she threw multiple knives at his head? According to her, he pushed her–which even she admitted did not justify the act. However, if you ask him, he claims there was even a stranger, less justifiable reason: they had an argument about pork chops. Specifically, he had eaten the leftover pork chops and when his hungry mom asked about them, he lied. I guess the lesson here is this: never lie to this woman about eating her food–and also, maybe just don’t eat her food at all.

Let me start out this one by saying that there is never a good reason to beat up your wife (or girlfriend or husband or boyfriend or pretty much anybody with few exceptions); however, the following has to be one of the worst reasons I have ever heard. A man in Florida was recently arrested for beating up and choking his wife who escaped and called 911. While there were a couple of reasons for his alleged attack, the one that stands out is the fried chicken. The couple got into an argument when the husband accused the wife of not having enough fried chicken leftovers. What exactly do you think is the appropriate amount of fried chicken leftovers one should have?

This one is the most bizarre by far: a woman in South Carolina stabbed her common-law husband when he came home on Christmas Eve without beer. Okay. So far this one does not seem any more bizarre than the others. But that’s only because I have not yet told you what she used in the alleged stabbing: a ceramic squirrel. This woman, who does not like to spend Christmas sober, took a ceramic squirrel, hit her husband in the head with it, and then stabbed him in the shoulder and chest. The man had not bought the beer because the store was closed. Maybe this would have been the only good reason to rob a store: to avoid domestic violence by squirrel.

I feel like all I really need to give you here is the headline about this Louisiana man: Dad Shoots Son in Butt During Fight Over Orange Juice. I mean, wow! (Oh yeah, one last thing I want to add: the 18-year-old son did not appear to have life-threatening injuries, which makes it okay, in my opinion, to laugh at such a weird tale.)

I had a horrible roommate in college–well, one of them was horrible, not all of them–and so I know the absolute rage that a bad roommate can cause in a person. That being said, I never once set my horrible roommate on fire. A woman in Florida cannot say the same. And this woman is 33, so we cannot even add on a, ‘stupid immature college kid’ to this horrible story. When this woman found out that her roommate had thrown out her leftover meal of spaghetti and meatballs, which she was saving for later, she doused her roommate in nail polish remover, and then set him on fire.

So here is another stabbing story: a woman in Ohio (Ohio and Florida just keep popping up as places you never want to live if you like to eat) was arrested for stabbing her boyfriend, allegedly over the fact that he ate all of her salsa. For this heinous crime, the woman stabbed him repeatedly with a pen. His injuries were not life-threatening. I hope that salsa was really, really good.

I Want Bacon, I’m Not Faking

This is the story that you are most likely to have already heard about. A woman in Michigan was arrested and convicted of shooting at a McDonald’s that twice forgot to put bacon on her bacon cheeseburger. Apparently the bacon is the most important part of a bacon cheeseburger. The woman was charged with shooting at an occupied building (she shot at the Micky-D’s, not at a person in the restaurant) and carrying a concealed weapon.

So there you have it. Seven good reasons why you should not mess with anybody’s food!

Ashley Shaw
Ashley Shaw is an Alabama native and current New Jersey resident. A graduate of both Kennesaw State University and Thomas Goode Jones School of Law, she spends her free time reading, writing, boxing, horseback riding, playing trivia, flying helicopters, playing sports, and a whole lot else. So maybe she has too much spare time. Contact Ashley at staff@LawStreetMedia.com.
Share:
Related ItemsArrestsCrimeCrime in AmericaFoodFood FightPorkchops