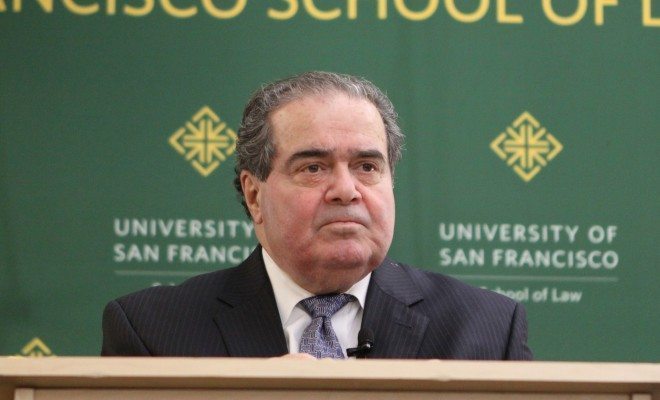 Today the Supreme Court ruled 6-3 to uphold important provisions of the Affordable Care Act. But in his strongly worded dissent, Justice Antonin Scalia used some of the most creative and entertaining language in Supreme Court history. Here are the top 10 funniest quotes from the dissent:

10. “The Court’s insistence on making a choice that should be made by Congress both aggrandizes judicial power and encourages congressional lassitude.”

I absolutely agree. Not to mention the vociferous remonstrance the Court will face after their incongruous conjecture.

9. “Words no longer have meaning.”

Finally, we can all throw away our dictionaries.

8. “Could anyone maintain with a straight face that §36B is unclear?”

Sorry, I tried my best, but I couldn’t

7. “What are the odds, do you think, that the same slip of the pen occurred in seven separate places?”

Well if we take the number of words written in the bill at 381, 517 and multiply that by the chances of a writing error at 1 in 1000 words, but account for the flux of the earth’s gravitational field using Gauss’s theorem as it pertains to the Capitol Building, then the chances are 1 in 999, BUT multiplying by the chance of it occurring in the exact places where the issue is mentioned using a factorial… it’s not very likely.

6.”We should start calling this law SCOTUScare.”

It does have a nice ring to it, but I don’t know how Obama would feel about that.

4. “A sense of belt-and-suspenders caution.”

I hope the Court isn’t ruling on any fashion issues anytime soon.

3. “The Secretary of Health and Human Services is not a State.” Later, “Because the Secretary is neither one of the 50 States nor the District of Columbia.” (tie)

Really, just for me!? No additives or anything!?

1. “The Court’s next bit of interpretive jiggery-pokery…”

Besides how random this reference is, of course not. Professors don’t care about undergraduates.

Maurin Mwombela
Maurin Mwombela is a member of the University of Pennsylvania class of 2017 and was a Law Street Media Fellow for the Summer 2015. He now blogs for Law Street, focusing on politics. Contact Maurin at staff@LawStreetMedia.com.
Share:
Related ItemsAffordable Care ActAntonin ScaliaDissentJustice ScaliaKing v. BurwellObamacareOpinionSCOTUSSCOTUScareSupreme Court