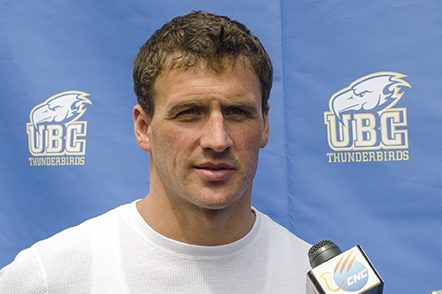 Image Courtesy of [Ubcwwong via Wikimedia]

At this point your guess is probably better than mine when it comes to answering the question “was Ryan Lochte lying about being robbed in Rio?” Not only has the silver-haired swimmer changed his story several times, but contradictory video footage from a security checkpoint and gas station seem to back up Brazilian authorities’ theory that the whole thing was an elaborate drunken coverup. In other words, things aren’t looking too good for the 12-time Olympic medalist.

While it might be a while before we finally learn the truth, Lochte is lucky he gets to safely sit this one out back in the U.S. The internet, however, wasted no time dubbing the swimmer guilty before ferociously mocking the scandal online. Since we can’t help but laugh (even though we kinda feel bad) at some of the memes, here are some of the funniest Twitter responses to #LochteGate and #LochMess:

Ryan Lochte lied about a night on the town to his mom and started an international incident. I’m dead.

Lochte’s fastest time was getting out of Brazil

Sketch of the guy who held up Lochte pic.twitter.com/sPLUvWz5dC

There is no justice where there is Comic Sans: this is the Brazilian judge’s order in the Ryan Lotche controversy. pic.twitter.com/ZqWblg7YLS

If it includes the letters “LOCH” then chances are it’s a hoax. #LochteGate pic.twitter.com/3gzHltXkER

Brazilian Police: “And you made the whole story up, didn’t you?”

Honestly, now would be the perfect time to actually rob Lochte

Alexis Evans
Alexis Evans is an Assistant Editor at Law Street and a Buckeye State native. She has a Bachelor’s Degree in Journalism and a minor in Business from Ohio University. Contact Alexis at aevans@LawStreetMedia.com.
Share:
Related Items#LochMess#LochteGaterio olympicsRobberyRyan LochteScandalTwitter