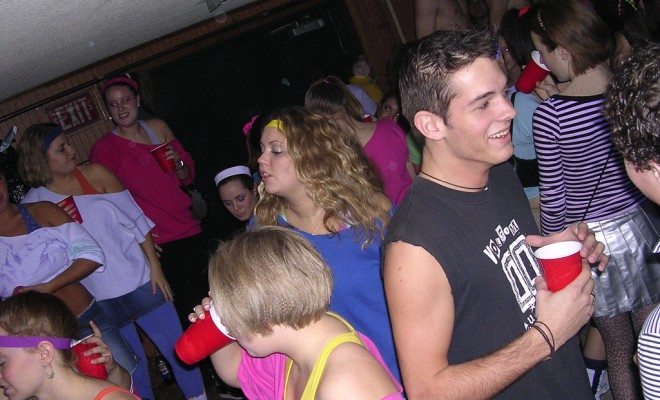 If the Republican Party Was an Actual Party

You open up your email after getting to work on Friday morning, and you see that right above an email from Amazon asking you to finally buy the panini press that’s been sitting on your wish list for months, you have an email from Reince Priebus. Confused, you open the email, and you realize that it’s an evite. “Who uses evites anymore?” you wonder. The message, in no-nonsense, 11-point Arial, says:

Paul Ryan and I are throwing a big party tonight at 10 p.m., and you’re invited. I was gonna co-host with John Boehner, but he got cold feet and decided he’d rather not be responsible for what happens. So anyway, there’s gonna be beer, foosball, and absolutely no marijuana—even for medical purposes. We’ve invited basically everyone we know, so get here, early because it’s probably gonna be crowded.

Your only other plans for the night were stream “X-Files” and decide which Trader Joes dinner to microwave, so you figure—why not? When work ends, you head home, eat some leftovers, and get stuck for a moment on what to wear. How do you dress for a Republican party? You briefly consider some bullet casing jewelry or your favorite “right-winger bitter-clinging” spangly jacket, but you decide on a Reagan/Bush ’84 T-shirt with a blazer. Hip.

Around 10:20 pm, you arrive at the house and see 17 cars in the driveway, so you park further down the street to avoid the inevitable chaos that leaving the Republican party will cause. When you approach the front door, you see a handwritten sign that reads, “We accidentally got the front door stuck. We know it’s not too safe, but we’ve requested that the backdoor remain opened. We’re all cool with this.” You trudge around the side of the house, thinking that this must be what it feels like to be Apple.

Once you walk inside, you’re immediately deafened by the volume of chatter in the crowded basement. Reasonably, there should only be a few people here, but instead, there are so many faces and names that you can barely keep track. This is going to be a long night.

You venture into the fray and see Scott Walker, Bobby Jindal, and Lindsey Graham all huddled in a corner, quibbling about how to get people to notice them. Rick Santorum meanwhile, is involved in a furious debate over whether Muslims or gays are more dangerous. He comes to the conclusion that a gay Muslim would be the most dangerous. He is talking to himself.

Carly Fiorina is being a bit of a buzzkill, because she won’t stop telling people about a found-footage horror movie she just saw, giving some pretty gory details about bloody baby parts. Someone asks her for the name of the movie, but Carly mumbles something about not remembering and quickly walks away. You hear Ben Carson telling George Pataki that the pyramids were built for grain, that he once attacked a man in a murder attempt, and that prisons are gay conversion camps. George responds, “Alright, but I just asked if you knew where the bathroom was.”

Jeb! Bush seems to be flitting between groups of people, trying to tell them a joke or ask how they feel about his cowboy boots. No one seems to be engaging with him, so he sits at the table eating some of the guacamole he brought. He gets excited when Marco Rubio comes over to the table, but after a scoop of guacamole, Marco retreats back to his corner and visibly winces as Chris Christie ambles over to him with a menacing look.

John Kasich is rifling through the CD rack, looking for some Linkin Park to play. Reince doesn’t have any Linkin Park CDs in his house because he isn’t a 15-year-old who’s mad at his dad. You ask John why he wants to play Linkin Park and he says, “they’re really good and I like those guys.” John looks sad.

Sitting on the couch, holding the bible in one hand and “The Catcher in the Rye” in the other, is Ted Cruz. It’s a huge couch—large enough to hold at least six or seven people–but for some reason, no one is sitting with him. Literally every person at this party is standing. Many look tired, but they refuse to sit with Ted. Ted is shouting but you can’t tell at whom, and the only phrase you hear is “radical Islamic terrorism.”

Hunched over in the center of the room, is a familiar face. Donald Trump is actually, literally vomiting on the carpet, and everyone around him begins to cheer for some reason. Reince sees you gawking at him, and shouts in your ear over the music, “We didn’t invite him! He’s been really rude, but for some reason he seems to be really popular, so we’re scared that if we kick him out, everyone will leave. Don’t worry, we’ve got it under control.” You see him pour some club soda into a sprayer bottle and hustle over.

After the cleanup effort, Reince and Paul turn off the music and say that some people have to leave. They’ve gotten a noise complaint from their “lamestream” neighbors. Dolefully, Rick Perry and Jim Gilmore head out the door. Wait, who is Jim Gilmore? And Rick Perry was here? You could have sworn that he went to last year’s party, but didn’t expect him to show up again after that party foul. Following Perry, Scott Walker, Bobby Jindal, Lindsey Graham, and George Pataki all get up to go. Then, in a mass exodus that feels like it takes months, everyone slowly files out. On their way out, you see Rand Paul and Mike Huckabee. Were they here too? How many evites did Reince send?

All that’s left now is Donald, Ted, and John. Mitt Romney comes downstairs and starts to lecture Donald on behaving maturely. Is Mitt Romney the GOP’s dad? you find yourself wondering. Donald hears this but listens to none of it. Mitt heads back upstairs, to resume his DVRed Jeopardy! episode and finish his glass of milk, you assume. You see Donald pull out his phone and bark into it: “Hey Sarah? Yeah, this party is very low energy–sad! I need you to come over here and liven it up a bit.”

You realize that you’re now standing in a room with Donald Trump, Ted Cruz, and John Kasich when you have a Netflix account and there’s a perfectly good armchair at your place underneath your poster of George H. W. Bush. You head to the bathroom, sneak out the window, and high-tail it to your car. On the drive home, you hold back a tear.