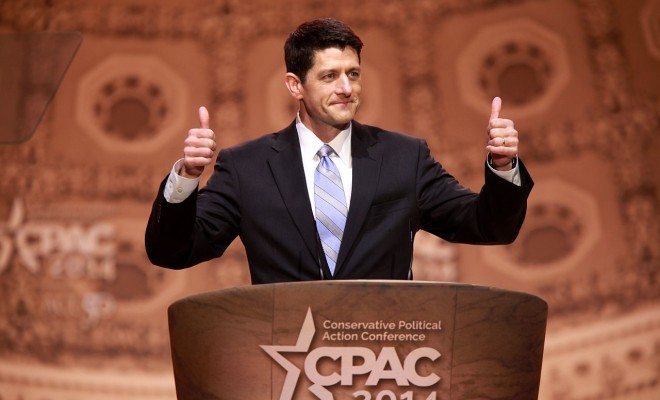 Paul Ryan is Not, Under any Circumstances, Running for President

Good news everyone! In case you were worried or concerned (although, honestly, with this year’s presidential candidate pool, who isn’t concerned?) Paul Ryan has made it very clear that he will not be running for president. That’s right. You’ve heard it correctly. Paul Ryan will not be the next President of the United States, so don’t even think about voting for him.

In a weird press conference last week, Ryan announced his lack of desire for the presidential nomination and his refusal to accept the nomination if it comes down to that. Check out his refusal at the 30 second mark:

He made it very clear in this video that he does not want the delegates nominating him and that he believes only candidates who ran in the primaries should be considered by those delegates, should the nomination decision go to convention this July. “I should not be considered. Period. End of story,” Ryan says affirmatively, before he proceeds to again emphatically state that he is “not going to be our party’s [the republican party’s] nominee.” It’s okay Paul! Calm down! No one is going to force you to be president if you don’t want to be, buddy!

Why was Ryan being so oddly repetitive and assertive as he announced his non-candidacy for president? Well, if we think back to last fall, Ryan pulled the same stunt when there were rumors flying around of him stepping into John Boehner’s role as Speaker of the House. Time after time, Ryan denied any desire to be the Speaker. There was even Twitter evidence that Ryan was dead set on not accepting the Speaker position.

Ryan spox to NBC News: "Chairman Ryan appreciates the support he's getting from his colleagues but is still not running for Speaker."

And, what happened in that situation? Less than a month later, Ryan flopped and stepped into his new role as Speaker of the House, despite numerous attempts to convince the public he really did not want the job.

This sudden change in heart last fall makes it hard to believe Ryan’s current media pleas, no matter how earnest and heartfelt they seem. But, don’t worry America, not too many people are falling for this shenanigan Ryan has pulled–even “SNL” called Ryan out on his nonsense in a skit that parodied his not a campaign announcement.

This “anti-campaign ad,” which features Taran Killam as Paul Ryan, hams up Ryan’s not running for president shtick. What starts as Ryan claiming he will not be America’s next president, under any circumstances, quickly transforms into what is essentially a campaign ad. This hilarious spoof directly mirrors Ryan’s “not running” campaign announcement, where he began by claiming he wasn’t running and then basically gave a presidential campaign speech immediately following the announcement. It’s a brilliant example of why satire and parody really are the best kinds of humor.

Will he be the nominee? Won’t he be the nominee? It really is too hard to tell in the midst of Ryan’s broken “not running” promises and confusing not campaigning announcements. The one thing that is certain, is that the Republicans are gearing up for a Convention nominee because it’s looking like that’s what the end of the Republican race will require. And, even though Paul Ryan is “not running,” I think we all know he could be just what this country needs after months and months of watching the zodiac killer (read: Ted Cruz) and America’s biggest bully (read: Donald Trump) duking it out.

So, anyways, we get it Paul! You’re not running for president just like we’re all not voting for you and not sick of the rest of the Republican presidential candidates. Your secret is safe with us.

Alexandra Simone
Alex Simone is an Editorial Senior Fellow at Law Street and a student at The George Washington University, studying Political Science. She is passionate about law and government, but also enjoys the finer things in life like watching crime dramas and enjoying a nice DC brunch. Contact Alex at ASimone@LawStreetmedia.com
Share:
Related ItemsCongressGOPNominationPaul RyanRepublicanSpeaker of the House