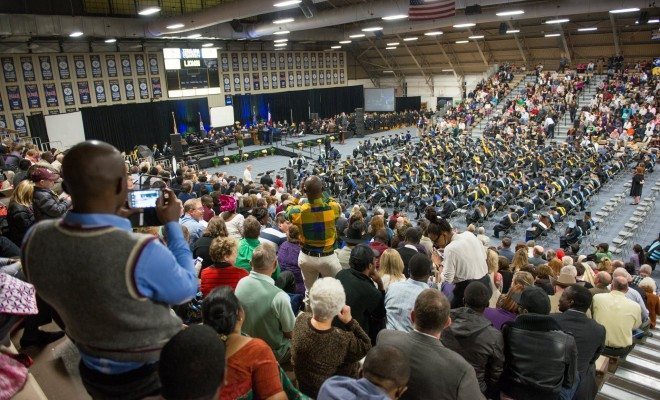 I recently went to my cousin’s high school graduation. As I rode with her to the civic center where the grand event would take place, I informed her that I had every intention of embarrassing her by being the person who cheered and whistled (or, since I can’t whistle, making whistle-like sounds) when they called her name despite the fact that they would clearly request at the beginning of the graduation to hold all cheering and applause until the end.

She told me she was fine with me doing this so long as I met one requirement: I could only cheer for her if someone made a lot of noise for any of the graduates before her.

I’d like to take a minute here to thank Emi for being smart. Since she graduated at the top of her class, very few students went before her. Which means that the cheering did not start until later in the program. Which means I kept my big mouth shut when her name was called. And that’s good because apparently you can get in a lot of trouble for screaming like a banshee in the middle of a dignified graduation ceremony.

All Those S’s in Mississippi Must Stand For Sssssshh!

Before Superintendent Jay Foster started reading names at the Senatobia High School graduation, he warned everyone that they better shut up until all the graduates’ names had been read. After all, Mississippi and dignified go hand in hand (is that the first time anybody has ever said that?), and he wanted this dignity reflected in the ceremony.

Now, as a member of a large family, I have been to way too many graduations. I have had to force myself to stay awake through some truly awful speeches and long lists of people of whom I only knew one. I can walk you through the steps of a graduation. And if there is one thing I know, it is that no matter how nicely you ask, there are going to be screamers in the audience.

(Disclaimer: the graduations I attend tend to be at small, Southern, extremely country schools, so if more ritzy schools don’t have this problem, please excuse my ignorance. Also, please excuse my earlier dig at Mississippi, where I am sure people really are generally dignified. But I’m from Alabama, and Mississippi jokes are all we have.)

Anyway, I have yet to hear of a school properly shushing the rowdy crowds that graduations tend to attract. That is, until I learned what Foster did when people disobeyed his direct orders.

You see, Foster was not joking when he told people to hold their applause. A few people must have thought he was, though. Because they cheered. And all sorts of chaos began.

As the ceremony progressed, the people who cheered when told not to cheer were escorted out. Okay. A little tough, but understandable. And it sent others the message. After all, only four people had to be asked to leave. Assuming the graduating class had more than a handful of graduates, that is not all that bad. So mission accomplished, Mr. Foster. Good job!

Wait! You don’t think that was enough punishment? You don’t think it will stop people from cheering at next year’s ceremony? But what else could you possibly do to teach them this valuable lesson on respect?

Hmm. I hadn’t thought about tracking three of them down and going to the police to press charges against them for disturbing the peace. That will teach them!

Foster thought of it, though. And more than just thinking about it, he actually did it.

What Will the Verdict Be?

Can cheering ever lead to an actual charge? (One which, by the way, could be punishable with up to six months in jail and fines of up to $500.)

We may never know. Because on Monday, the school district decided to drop the case–a day before the court appearances were set and more than three weeks after the infamous ceremony. And I don’t know how I feel about this. In order to sort through my feelings, I made a pros and cons list.

Pros of dropping the case:

Cons of dropping the case:

After reviewing my list, I see that there is a clear winner. Should we really be encouraging all those cheerers by not pressing charges against them? I don’t think so. Stop being so soft on these criminals, people. If we let them get away with things like this, we might not ever get a quiet graduation. And that is a thought just not worth contemplating.