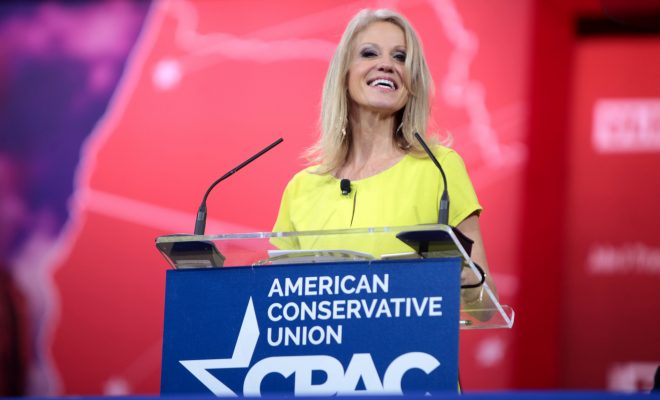 Donald Trump is now officially the 45th president of the United States. But something else caught our attention at the inauguration ceremony–Kellyanne Conway’s outfit. She celebrated Trump’s swearing in wearing a very patriotic coat/dress in red, white, and blue. Someone pointed out that the outfit is a $3,600 Gucci creation, and if you look closely, the buttons are actually catheads. She paired the coat with a red hat.

Why is Kellyanne Conway wearing a Nutcracker costume

Who wore it better: #KellyanneConway or the #Nutcracker???? https://t.co/PrA7dVBTq7 pic.twitter.com/VEsmukfHfl

“The Daily Show” was pretty on point.

Kellyanne Conway dressed as the era Trump wants to take America back to. #InaugurationDay pic.twitter.com/Vrmc1Bq3Nz

Though the colors match the American flag, the high-end designer clothing site Net-A-Porter wrote that the coat was inspired by the British flag that includes the same colors. And considering the British connection, she could also have been inspired by this furry guy—especially with the hat.

Who wore it better: Kellyanne Conway or Paddington Bear? pic.twitter.com/CP2M6fzLyD

But the French flag also has the same colors, so maybe it was a nod to Napoleon.

Or maybe she was influenced by the sports world?

Why does Kellyanne Conway look like the old New England Patriots logo? pic.twitter.com/swgdHH53v6

Today also happens to be Kellyanne’s 50th birthday, so maybe she just wanted to be really dressed up in her favorite colors. The inauguration festivities will go on all day long and end with the inaugural balls tonight.

Emma Von Zeipel
Emma Von Zeipel is a staff writer at Law Street Media. She is originally from one of the islands of Stockholm, Sweden. After working for Democratic Voice of Burma in Thailand, she ended up in New York City. She has a BA in journalism from Stockholm University and is passionate about human rights, good books, horses, and European chocolate. Contact Emma at EVonZeipel@LawStreetMedia.com.
Share:
Related ItemsInaugurationInauguration DayKellyanne ConwayOutfitsPresident Trump