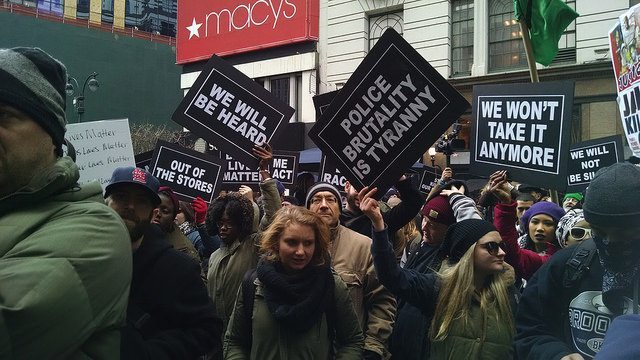 The decisions by grand juries not to indict the police officers who killed Michael Brown in Ferguson, Missouri and Eric Garner in Staten Island, New York–both unarmed black men–have sparked a visceral reaction from many Americans coast to coast. In the case of Garner, the reaction transcended partisan politics, with conservative voices such as Glenn Beck expressing disbelief at how an unarmed man being choked to death on camera was not enough to even start a criminal proceeding against his killer, Officer Daniel Pantaleo.

On the other hand, there are those who reject the idea that the system failed these victims and their families, and that these outcomes are indicative of a larger institutional design that disproportionately victimizes black people. They tend to view these cases as “isolated incidents,” unfortunate yes, but perhaps unavoidable in a society where police are confronted with violent crime on a daily basis. Inevitably, they veer into defaming the victim’s character. “It’s not like Michael Brown was an angel. Did you see the video of him robbing that store just before the shooting?” I have even heard some version of these quotes uttered by people very close to me, whose opinions I hold in high regard. Yet, here they are apologizing for murderers.

It is not difficult to see the striking parallel between this behavior and the victim-blaming that surrounds cases of rape and domestic abuse involving women. “Well she was wearing a short skirt” “Wasn’t she drunk?” “Why did she go back to him?” A system designed to protect men at the expense of women will scrutinize the woman’s actions to see what she did to bring such misfortune upon herself, rather than investigating the criminal actions of the male perpetrator. This, in turn, engenders a deep distrust of the system among women and explains why a majority of sexual assaults go unreported.

Similarly, a system designed to protect white lives at the expense of black lives makes it acceptable to blame the black victim of a senseless murder. Whether 18–year-old Brown or 43-year-old Garner were “angels” before their lives were cut short bears no relevance on whether their killers should be held accountable for their untimely deaths. Those who feel these are appropriate counterarguments to an issue that’s been blown out of proportion by the media are products of this system and these are misplaced attempts at appearing “fair and balanced.” That Officers Wilson and Pantaleo may never face a public trial for their actions means that the system worked as it was designed. Unfortunately, this also means that the distrust of law enforcement in black communities was only compounded. Obama’s call for $263 million for body cameras on police may increase transparency, but trust will elude us until we can seek justice in a system untainted by vestiges of the racial caste system that this country was built on.

Kesav Wable
Kesav Wable is an attorney practicing in New York, as well as an accomplished actor and writer. His short film For Flow, an HBO American Black Film Finalist in 2011, was broadcast on HBO/Cinemax, and he continues to develop scripts for the stage and screen. Contact Kesav at staff@LawStreetMedia.com.
Share:
Related ItemsCriminal Justice SystemDaniel PantaleoEric GarnerFergusonJustice SystemMichael BrownMissouriNew YorkNYCPolicePolice BrutalityProtestRacismSexual AssaultVictim Blaming