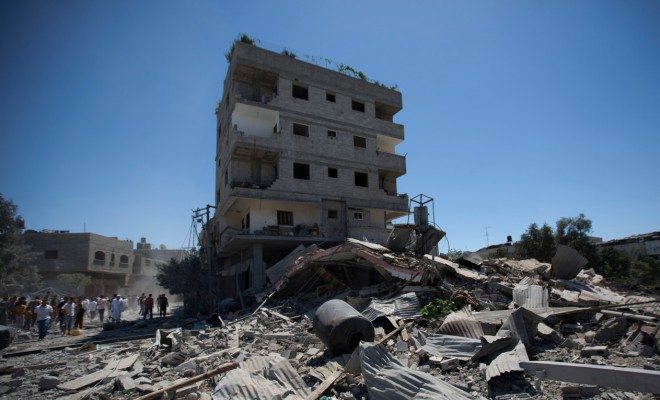 The current conflict in Gaza between Israel and Hamas has been met with repeated declarations by American politicians about Israel’s right to defend itself. Now in its fourth week, the Israeli Defense Force’s “Operation Protective Edge” has claimed the lives of more than 50 Israeli soldiers, three Israeli civilians, and upwards of 1,500 Palestinians — 80 percent of whom the United Nations estimates are civilians.

With death tolls that lopsided, it’s worth taking a look at self-defense: what does each side consider it to be and do Israel’s actions legally qualify? Here’s the breakdown, starting with the origins of the current conflict.

One common narrative to explain how the fighting started has dominated the media. That storyline claims that on June 12, members of Hamas kidnapped and killed three Israeli teenagers, prompting a massive search of Gaza and the West Bank for the victims. The kidnapping led a group of Israeli settlers to kidnap and burn alive a Palestinian teenager in a revenge attack. Hamas, it is said, then launched rocket fire into Israel in response, leaving Israel with no choice but to retaliate.

What is often buried in this narrative is that before any rockets were launched from Gaza in the current conflict, Israel led an operation in which it arrested more than 500 Palestinians while searching for the three missing teens. Nine palestinians were killed in that campaign, known as “Operation Brother’s Keeper.” More importantly, Israeli officials knew from early on that the teens had been dead — despite their claims that they were searching for the boys alive. There’s evidence that one of the kidnapped boys managed to phone the Israeli police. The boys were killed during that phone call, but the recording and the knowledge of the deaths were under a gag order that wasn’t lifted until July 1. All of this calls into question why Israeli authorities carried out their search under the misinformation that the boys may have been alive.

There’s also some confusion over who took the young men: while Israeli Prime Minister Benjamin Netanyahu initially blamed members of Hamas as the kidnappers and murderers of the three Israeli teens, officials later admitted that they believed the culprits were acting as “lone cells.”

The question of who sparked this conflict absolutely depends on how you frame recent events. But to say that it began with Hamas’ rocket fire ignores Israel’s provocative and questionable actions.

Israel’s Right to Defend Itself

Netanyahu, President Barack Obama, Secretary of State John Kerry, and the U.S. Senate have publicly maintained that Israel has the right to defend itself from thousands of rockets being launched over the border from Gaza by the al-Qassam Brigades, Hamas’ military wing. The problem is that nearly all of those rockets either land in open fields or are intercepted by Israel’s Iron Dome system.

While anyone can argue that any state has the right to defend itself from outside attacks, Israel is an occupying power in the Gaza strip according to international law. That means Israel needs to uphold the tenants of occupation law, which dictates that it is responsible for the safety and security of all Gazans.

Stemming from the Hague Regulations of 1907, the Fourth Geneva Convention of 1949, and the Additional Protocols of 1977, occupation law identifies an occupation as “when a State exercises an unconsented-to effective control over a territory on which it has no sovereign title.”

Since Israel defeated its Arab neighbors in the 1967 war and took control of the West Bank, the Gaza Strip, and the Golan Heights, Israel has been a military occupant in Gaza. Therefore the current offensive by Israel in Gaza is not technically self-defense. Israel can defend itself against rocket attacks, but since Hamas’ rocket attacks are coming out of territory that Israel itself controls, it must operate in accordance with occupation law, and use nothing more than police force to restore order.

Israel claims that it is no longer occupying the Gaza Strip since it withdrew 8,000 settlers in 2005. But that argument skips over the fact that Israel still maintains control of the Gazan airspace, territorial waters, and its border crossings, in conjunction with Egypt. Israel’s regulation of what goes in and out of Gaza is so strict that it even counts the calories in the food that is imported. Whatever Israeli officials may claim, evidence of an occupation abounds.

If we forget for a moment about international law and assess what is happening on the ground in Gaza, Israel’s actions are hugely disproportionate and cannot be considered self-defense. Israel has ensured that Gaza is no threat to its civilians, through the military occupation of Gaza and through implementation of the Iron Dome. Israel’s U.S.-funded military is a giant compared to Hamas’ guerrilla fighters and collection of rockets that it can’t even aim.

Israel has claimed that it is only targeting Hamas operatives and is taking any and all precautions necessary to avoid civilian deaths. But the 80 percent civilian death toll suggests otherwise. Israel is known to use phone calls, leaflets, and “roof knocking” — hitting a building with a small missile before blowing it up — to warn civilians of an impending strike. But the civilians often have no time nor place to evacuate in the tiny, overcrowded area. Israeli strikes on Gaza are also suspected to have several times hit U.N. facilities that function as schools, shelters, and hospitals, even after being given their exact GPS coordinates. The most recent incident drew public condemnation to both sides from U.N. Secretary-General Ban Ki-Moon, who called it “a moral outrage and a criminal act.”

Israel’s attempts to deter criticism by claiming that Hamas stores and fires weapons near these civilian areas and uses civilians as human shields. This argument is hard to defend since, in the 140 square mile strip home to nearly two million people, you’d be hard-pressed to find non-civilian areas. This argument also attempts to absolve Israel of any wrongdoing by blaming Palestinians for their own deaths.

After multiple failed ceasefires, the current conflict seems to be coming to its final moments as Israel withdraws most of its ground troops from Gaza. To say that Palestinians are tired of being on the losing side of things is an understatement. But as public opinion about the decades-long conflict shows signs of shifting, especially in the younger generations, and as the the death toll continues to rise, some Palestinians are calling for a third intifada. Palestinians may feel that they have no choice but to rise up if Israel continually dodges international accountability.

True and swift consequences for Israel’s violations are highly unlikely to happen in the U.N. with the U.S.’ imminent veto in staunch support of its ally. And Israel never ratified the Rome Statute, which established the International Criminal Court, and doesn’t have any legal obligations to it. Palestine, however, which is recognized in the U.N. as a non-member observer state, could accede to the Court, granting the prosecutor jurisdiction to investigate war crimes that happened in Gaza.

Zaid Shoorbajee
Zaid Shoorbajee is a an undergraduate student at The George Washington University majoring in journalism and economics. He is from the Washington, D.C. area and likes reading and writing about international affairs, politics, business and technology (especially when they intersect). Contact Zaid at staff@LawStreetMedia.com.
Share:
Related ItemsBenjamin NetanyahuGazaHamasIsraelIsraeli Defense ForcesIsraeli-Palestinian ConflictOccupation LawPalestineWest Bank