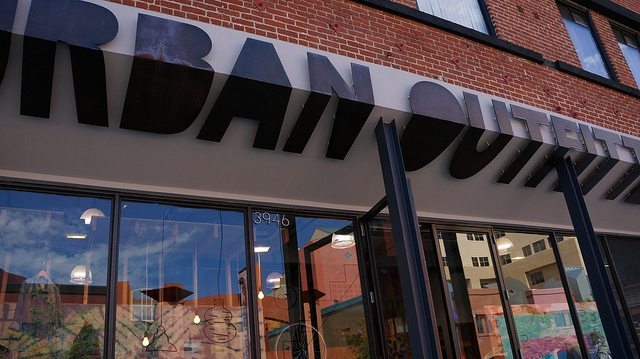 Urban Outfitters Forges Ahead With Offensive PR Strategy: Will it Pay Off?

Urban Outfitters deserves an award for the ballsiest PR stunts of pretty much any clothing company. Forget American Apparel and its usually naked models; forget United Colors of Benetton and its Pope-kissing ads; the award goes to Urban Outfitters.

The reason Urban Outfitters takes the top spot here is because of its most recent transgression — yesterday a particularly tasteless item was discovered on its site. I’ll let this tweet sum it up:

Urban Outfitters are selling a “vintage” Kent State jumper, blood splatters and all. Nothing says “hip” like murder. pic.twitter.com/tq63ONAniq

That’s right, that’s a Kent State sweatshirt that clearly looks pretty blood stained. And what is Kent State most famous for? The May 4, 1970 shootings by members of the National Guard that left four students dead and the campus and nation devastated.

Of course, Urban Outfitters “pretended” to have an answer, releasing a statement that said:

Urban Outfitters sincerely apologizes for any offense our Vintage Kent State Sweatshirt may have caused. It was never our intention to allude to the tragic events that took place at Kent State in 1970 and we are extremely saddened that this item was perceived as such. The one-of-a-kind item was purchased as part of our sun-faded vintage collection. There is no blood on this shirt nor has this item been altered in any way. The red stains are discoloration from the original shade of the shirt and the holes are from natural wear and fray. Again, we deeply regret that this item was perceived negatively and we have removed it immediately from our website to avoid further upset.

Sure, Urban Outfitters. I’m sure that literally no one involved in the production, marketing, or selling of the shirt noticed what every single person who saw a picture of it did — those red spots look remarkably like blood stains.

Listen, Urban Outfitters knows what it’s doing. If this were an isolated incident, maybe I’d give them a pass, but this is just the latest in a long string of PR stunts the company has used. Here are a couple times that the company charmingly attempted to glorify various disorders:

Dear @UrbanOutfitters, Depression and a girl with 2% body fat wearing an Eat Less shirt is not a fashion statement. pic.twitter.com/yEKurbhBwp

Again, Urban Outfitters followed the exact same path. It received serious amounts of backlash over the shirts, came out with half-assed apologies, and moved on.

Remember that saying, “Any press is good press?” Urban Outfitters really seems to be taking that idea to heart. The more controversy you stir up, the more people talk about your brand. It’s pretty clear that that’s the philosophy that the company is attempting to use to sell clothes right now…but the real question is whether or not this tactic is working.

In 2012, Urban Outfitters hired a new CEO and purportedly tasked him with edging up the brand. There’s a fine line between edgy and offensive though, and Urban Outfitters has stepped way over that line. The fact that sales have been floundering while the other stores under its parent company have been growing, doesn’t bode well for the retailer.

Urban Outfitters has chosen to adopt the hot-mess Miley Cyrus strategy of marketing, and no one can give them any flak for not going all in with it. While this Kent State sweatshirt controversy is truly gross and horrible, I heard more people mention Urban Outfitters yesterday than I have in a very, very long time. That being said, whether or not it actually attracts new people to the brand remains to be seen — all press is not necessarily good press.

Anneliese Mahoney
Anneliese Mahoney is Managing Editor at Law Street and a Connecticut transplant to Washington D.C. She has a Bachelor’s degree in International Affairs from the George Washington University, and a passion for law, politics, and social issues. Contact Anneliese at amahoney@LawStreetMedia.com.
Share:
Related ItemsDeclining SalesfashionKent StatePoor TastePRPublicityPublicity StuntSalesUrban Outfitters