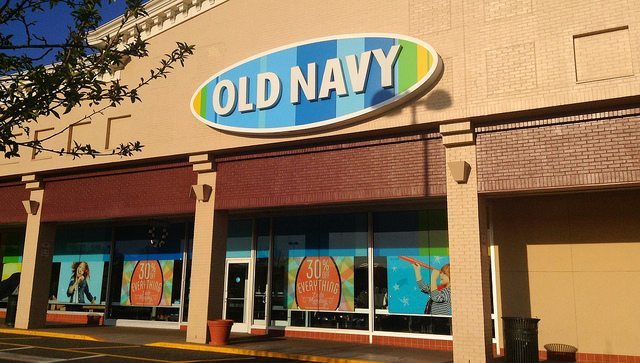 On Friday, Old Navy tweeted out an ad featuring an interracial family to promote its Thank You Event.

The ad quickly drew fire from racist trolls who discussed plans to boycott the franchise while criticizing the company for promoting “miscegenation.”

Miscegenation, for those of you scratching your head, is an archaic term defined as the marriage and/or procreation of people considered to be of different racial types.

Many of the racist tweets have since been deleted, however, Jezebel managed to acquire several screenshots before they could be taken down.

She was joined by the user @CulturalCombat who wrote, ” I will never step into an @OldNavy store again. This miscegenation junk is rammed down our throats from every direction.”

The user @marylovefreedom also accused the ad of having a hand in “white genocide,” a theory that alleges immigration, integration, interracial marriages, low fertility rates and abortion in predominantly white countries is a conspiracy to deliberately cause white people to go extinct (even though she mistakingly tagged the post #WhiteGeocide.)

Clearly Old Navy’s message struck a nerve. The retailer, which typically receives likes and retweets in the 1-100 range, earned a huge boost in impressions after publishing the post.

Despite the hate, the overwhelming majority of responders supported Old Navy’s decision to portray a mixed race family in its ads. Several interracial couples and families began thanking the company by sharing photos of themselves and tagging the posts with the hashtag #LoveWins.

Hey @OldNavy, my family and I thank you for the diversity in this ad! #LoveWins, no matter the color ❤️ pic.twitter.com/TjgYUPMGu4

.@kharyp @OldNavy Thank You Old Navy! Interracial families are beautiful and we appreciate the representation! pic.twitter.com/kVNuGHfAB9

.@OldNavy Props on this ad! My family and I appreciate it. #RepresentationMatters pic.twitter.com/ZXQ8YbT0QS

Thank you @OldNavy for finally representing us #thankyouevent #oldnavy pic.twitter.com/x1d1TAifOY

Thank you @OldNavy for featuring interracial families in your ads! #oldnavy #LoveWins pic.twitter.com/o7oMQErZPp

Hey Old Navy, love your new ad! I don’t shop there regularly but will definitely be going this week! #lovewins pic.twitter.com/iDohUc7pmy

It’s surprising that this particular ad would drum up so much conflict, since Old Navy notably has consistently featured a diverse cast of models in its marketing.

Old Navy doesn’t seemed phased by the controversy though. Spokeswoman Debbie Felix said Monday, “We are a brand with a proud history of championing diversity and inclusion. At Old Navy, everyone is welcome.”

Alexis Evans
Alexis Evans is an Assistant Editor at Law Street and a Buckeye State native. She has a Bachelor’s Degree in Journalism and a minor in Business from Ohio University. Contact Alexis at aevans@LawStreetMedia.com.
Share:
Related ItemsGender Neutral BathroomsInterracial MarriageLove WinsMiscegenationOld NavyRacismTrolls