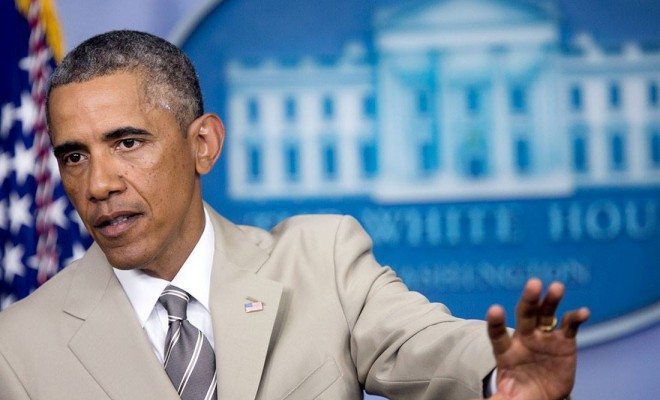 Obama’s Tan Suit Proves He Has Given Up

By now you’ve probably heard about the unusual-colored suit President Obama wore to a press conference last week. Everyone seemed to have something to say about it. But as unflattering as the suit appeared, I think people are failing to see the real issue at hand, which the suit even helped to illustrate: our president has no idea what he’s talking about when it comes to the current issues at hand in foreign policy.

By wearing this particular tan suit, the president basically let the country know that he has simply given up. The suit washed out his complexion just like Russia and ISIS have washed him out, so to speak. When asked about his plans for Iraq, he merely replied, “We don’t have a strategy yet.”

Throughout his statement, despite being asked directly what his plans are, Obama seems to beat the bush giving vague answers about a plan that he has to make in the future. While it’s understandable that he doesn’t want to give out any information that’s not yet necessarily set in stone, foreign conflicts such as the ones at hand require crucial timing. If he waits too long to make a plan it may be too late, potentially costing a significant number of lives.

This is hardly the first time that the president has caused controversy with his sartorial choices. From his very first days in office, the public was up in arms over his decision to bare his shirt sleeves in the oval office. While he may have wanted to be the cool and casual president at the beginning of his presidency, the tan suit seemed to have gone a little too far. They say clothes make the man, and in this case the clothes made the man look defeated.

Granted, I would love to give the president props for straying away from the standard black suits politicians typically wear, after all it is the year 2014. However, there is a time and place for everything. A conference regarding the current state of war in Iraq and serious foreign threats our country faces from Russia is hardly the time to take a new fashion risk. Perhaps the president should’ve saved the khaki suit for a stroll in the Hamptons over the holiday weekend.

In the grand scope of things, it really doesn’t matter what the president is wearing, but rather the message he has to deliver to our country. The media’s reaction to his suit was certainly blown out of proportion, but I still think it is interesting how the suit’s color seemed to coincide with the overall tone of the president’s statement. There’s certainly no law dictating that the president must exclusively wear black suits, but if there were would the message have been received by the public in the same way? Obama has made several poor decisions throughout his presidency and that morning, his poor sense of judgement seemed to carry through to his wardrobe choices, as well.

Katherine Fabian
Katherine Fabian is a recent graduate of Fordham University’s College at Lincoln Center. She is a freelance writer and yoga teacher who hopes to one day practice fashion law and defend the intellectual property rights of designers. Contact Katherine at staff@LawStreetMedia.com.
Share:
Related ItemsAttireForeign PolicyMediaObamaPresident ObamaPress ConferenceRussiaStrategyStyleTan Suit