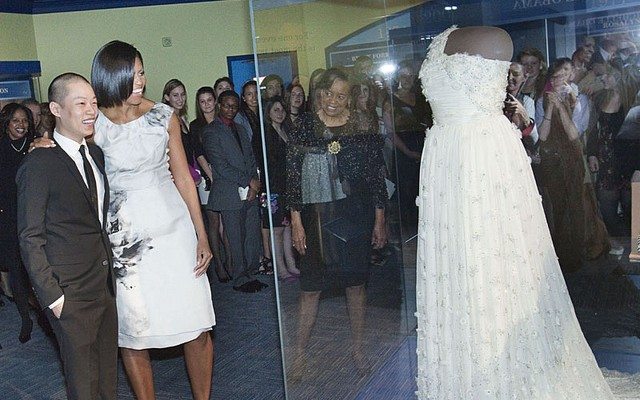 Why is Fashion Such an Important Issue for Women in Power?

By now you’ve probably gathered how important I think it is for a person of power to present themselves as far as their sartorial choices go; however, that doesn’t mean I don’t see the inherent double standard in society’s speculation over what women in power wear. From first ladies to political candidates, the public loves to ask a woman about what she wears and why she wears it. In fact, it was former Secretary of State Hillary Clinton herself who once shot down an interviewer’s inquiry about what designers she likes to wear with the now-famous retort, “Would you ever ask a man that question?” Personally my answer would be yes, but I’m fully aware that I’m in the minority here.

The recently-opened exhibit at the Design Museum in London titled “Women Fashion Power” says a lot about how society tends to care more about how female politicians dress than it does about males. While sometimes there’s a correlation between a politician’s confidence and his appearance — a la Obama’s tan suit — clothes shouldn’t affect voters’ opinions on how well a person can lead, especially women.

While men may appear to have fewer options outside of the accepted black suit as formal and professional attire, tailoring is always key. If his jacket is too big, then the suit will end up wearing him as opposed to the other way around. People don’t want to vote for a walking suit, they want to vote for a powerful and trustworthy man — or woman.

“We want you to see firsthand that a solid education and the willingness to work hard is really at the core of what it’s going to take to achieve your goals: education and hard work.” —The First Lady to #FashionEdu Thank you to all the leaders in the fashion industry who encouraged the students at today’s Fashion Education Workshop to #ReachHigher in their education.

Yet from Wendy Davis’ famous sneaker-and-skirt-suit ensemble to Hilary Clinton’s rainbow of pantsuits, voters love to refer to a woman of power by her clothing choices. First Ladies like Michelle Obama and Jacqueline Kennedy are constantly scrutinized, or lauded, for what they wear to every single appearance they make. The press couldn’t stop talking about the fact that Mrs. Obama finally wore American couturier Oscar de la Renta to her fashion education panel just days before the designer’s passing. The first lady has expressed her disinterest in fashion in the past, so why is she trying to fit into the fashion crowd now? Is this the only way for her to solidify her position of power? The exhibit in London even starts with fashions of ancient Egyptian leaders like queen Hatshepsut, but surely ancient male leaders dressed just as ornately. Yet we only ever talk about King Tut’s naked corpse.

Clothes definitely play an important role in any public figure’s reputation. But why does the public care so much more about what a “woman of power” wears than they do about the president’s and other male politicians’ clothes? All I know is that when I go to the ballot box next Tuesday, any women I happen to vote for will be because I trust in their ability to lead based on their policies and past actions. The fact that they dress cute is merely an added bonus.