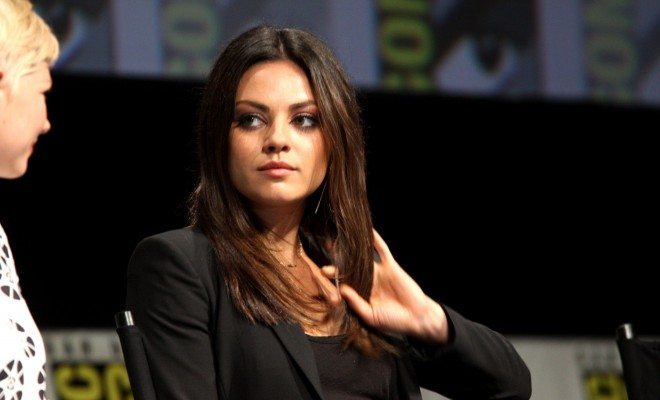 I am a busy person, which means I don’t get to spend hours at a time following the latest Hollywood gossip. I can usually survive without keeping up with the Kardashians and the Bieber and so on. However, every once in a while, I stumble across a celebrity scandal so interesting that I question everything I thought I knew about myself and begin to wonder why I ever do anything other than watch E!.

I mean, if I kept up with my star news, I would have known two whole weeks ago that Mila Kunis stole a transgendered chicken from a talking baby in Ukraine. And really, the fact that I am just now learning this is a travesty.

Since it’s a few weeks old, there is a chance you have already heard something about this. But I think it will be just as weird and entertaining to take an in-depth look now as the whole messy legal battle continues to heat up.

The Story in a Nutshell

According to Kristina Karo–and as she told Mr. Immigration Man in what has to be my new all-time favorite music video, “that’s Kristina Karo with a K, a KK. You know, like Kim Kardashian, only with talent.”–she and Mila Kunis used to be best friends when they were younger and were both still living in Ukraine.

However, that friendship ended with a hen-ious crime when the girls were in first grade. Although, as Aston Kutcher points out, since Karo claims to be much younger than the 31-year-old Kunis, she must have been one month old, in first grade, and talking when this all happened, making her the smartest baby of all time. Of course, her publicist tried to downplay her intelligence by saying she is, in fact, the same age as Kunis but exaggerates her age for sarcastic purposes. But, I think the talking baby thing is just as likely as everything else that happened in this tale.

You see, Karo had a beloved pet chicken named, as many a chicken is, Doggie. Doggie was a smart chicken and a good representative of his/her namesake, a dog. You could play fetch with her, and she would bring you the ball. You could call him, and he would come. If you didn’t think chickens did these types of things, you are wrong.

Of course, as good reporters must fact check, they asked Karo to clarify her mixed use of genders. Was the chicken a rooster or a hen? I’m guessing it was transgender because when asked the seemingly simple question, Karo said it was “not something she could go into.” Whatever the gender, one day, Doggie went missing.

Karo did not have to wait long to find out where he/she had gone. Kunis, an honest thief, quickly confessed to the crime, telling Karo she could have any chicken she wanted as a pet since she had an entire chicken farm. Then, Kunis fled the country to live out the rest of her life in hiding in the U.S.

Where are they now?

Unfortunately for Kunis, her plans to live on the lam were fowled when she became a mega-success in Hollywood. I’m sure had she realized this would make finding her easier, she never would have begun acting in the first place. But hindsight is 20/20.

A few years ago, Karo came over to the states in the hopes of getting a green card and a music career–as she relays in her hit, “Give Me Green Card”–so they were bound to run into each other.

Karo had repressed the horrible memory of her stolen, beloved pet for years, but when she came to Hollywood and saw the starlet who had betrayed her when they were youths, all of the wretched memories came rushing back.

Where was Doggie? Was he alive? Had he gone to chicken heaven? Had he finally selected a gender? These are all questions to which she would never have the answers.

Now that Doggie was once again in her mind, Karo needed to get at least a little bit of closure. That is why she filed a suit in small claims court demanding $5,000 for the emotional distress caused by this traumatic childhood event.

For her part, Kunis has not yet been served. She has apologized for the confusion but says that, as a chicken advocate, she would never steal someone’s chicken nor would she have done so at any time in the past, even as a child. She kind of ruined the good intentions, though, when she followed the apology up with possible slander by hinting that it was no coincidence that this suit came out just as Karo is trying to promote her music video.

This is likely to be a close case when it finally makes it to trial. On the one hand, unless we find the chicken, there may be no evidence. On the other hand, nobody would ever be able to make up such a crazy tale, right? Plus, Karo did get a confession from young Kunis, which could help her case. However, I think Kunis could block this on some statute of limitations argument. We’ll all just have to wait and see.

Speaking of that music video, Kunis is threatening to countersue for the same $5,000 she could lose. She claims that after watching the video, “my body hurts. My eyes hurt. They’re burning. That requires money.”

I watched the video, and I didn’t think it could be any more perfect than it was; I would not change one second. So I do not know how this countersuit will fare in court. I am looking forward to finding out, though.

Karo is clearly doing this all for the attention (because for some reason I do actually doubt most of this is true.) However, do I feel bad about giving it to her? Absolutely not! If you want attention so badly you’d make up this beauty, then you deserve to get it. And really, how can we not talk about this ridiculous case?