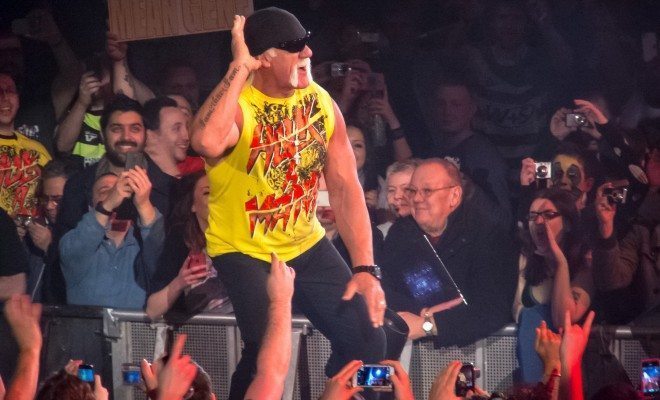 A legal feud between Hulk Hogan and the Gawker media empire is  finally making its way to court. Hogan filed a $100 million defamation suit against Gawker back in 2012 after the site published a minute and 41-second long chunk of the sex tape. That suit is now making its way to trial–jury selection just began in St. Petersburg, Florida.

The sex tape featured Hogan–whose legal name is actually Terry Bollea–and Heather Cole, who at the time was the wife of radio personality Bubba the Love Sponge Clem. The fact that Clem and Hogan used to be good friends put a whole new twisted spin on the entire thing. The existence of the tape was actually not a secret, given that multiple news sites referenced it and some published stills from it. But Gawker, which received the video anonymously in 2012, was the first to actually publish a segment of it. The article was entitled, with true Gawker panache “Even for a Minute, Watching Hulk Hogan Have Sex in a Canopy Bed Is Not Safe for Work but Watch It Anyway.”

Hogan is claiming that his privacy was violated because of the sex tape leak, is suing the media company for defamation, and accused Gawker’s lawyers of releasing confidential comments from the video to the media. While the idea that the most salacious part of a sex video could be the things said on it sounds kind of insane, it’s not–the comments released were racist remarks about his daughter Brooke Hogan dating a black man. The ensuing backlash eventually led to WWE severing ties with one of its biggest stars. Hogan’s lawyers called Gawker’s actions “outrageous, irresponsible, and despicable.”

Gawker’s response has been mostly focused on First Amendment rights, and the media company says that because Hogan has been open about his sex life in the past, the video was fair game. Gawker founder Nick Denton said last summer: “I care about the readers having the right to know both sides of a story. Readers should also have the right to get the story behind the celebrity story.”

Essentially, this entire case boils down to questions about how much privacy celebrities can expect–especially in the age of the internet and easily-shareable recordings. A jury in St. Petersburg will have to decide the answer to those questions soon.

Anneliese Mahoney
Anneliese Mahoney is Managing Editor at Law Street and a Connecticut transplant to Washington D.C. She has a Bachelor’s degree in International Affairs from the George Washington University, and a passion for law, politics, and social issues. Contact Anneliese at amahoney@LawStreetMedia.com.
Share:
Related ItemsCelebrityGawkerHulk HoganPrivacyRacismSex TapeWrestlingWWE