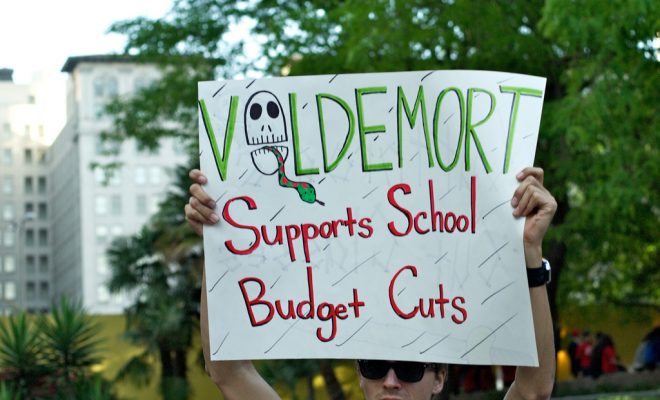 Yesterday, June 26, marks the 20th anniversary of the publication of “Harry Potter and the Philosopher’s Stone,” which began the worldwide phenomenon that captured the attention of millions across the globe. In the 20 years since the first book was published, the Potter series is still culturally relevant, and has become especially notable in the past year since President Donald Trump rose to power.

J.K. Rowling, who authored the books, has taken a strong stance against Trump and what he represents; she can often be found on Twitter mocking the American president. Whether it’s about Trump’s responses to terrorist attacks or his ridiculous actions, Rowling is quick to criticize Trump, often delighting her youthful fan base. Here are just two examples of the millionaire’s social media commentary:

It’s called ‘leadership’, Donald. The terrorists were dead 8 minutes after police got the call. If we need an alarmist blowhard, we’ll call. https://t.co/NUiy9j4fBt

I wonder whether Trump talks to Trumpself in the third Trumperson when Trump’s alone. https://t.co/8CEzVTJjBq

Rowling’s presence on Twitter isn’t the only way Harry Potter fans are staying connected to the series as they resist the Trump Administration. Many fans have compared Trump to Voldemort, the antagonist of the series who comes to power and attempts to create a society of “pure blood wizards.” This Twitter user broke down her feelings on the similarities between the two:

I realized how similar Lord Voldemort and Donald Trump are so I wrote this… pic.twitter.com/UG33ZTUfYf

Others have turned to Hermione Granger, the main female protagonist, as a symbol of female power within the resistance. The reason Granger is so appealing to young girls, the Huffington Post argues, is that “here was a smart, hyper-competent, over-achieving woman facing down a cartoonishly unqualified man who spewed hatred at women, Muslims, immigrants, refugees, and disabled people.”

a nation of hermiones #WomensMarch pic.twitter.com/hvfDu3oL9m

Given that Emma Watson, who portrayed Granger in the movies, is a feminist symbol herself, the comparison becomes even more applicable. Watson, who graduated from Brown University in 2014, is an outspoken feminist and a UN Women Goodwill Ambassador.

While the comparisons offer children the opportunity to tangibly relate the real world to something they understand and love, some people are frustrated with the constant comparisons. One writer from The Federalist even argued that the comparisons “contribute to making our politics glib, emotion-driven, over-simplified, and posturing. At the same time, it takes beloved childhood stories and politicizes them in a way that narrows and diminishes their meaning.”

Others are simply tired of the constant references:

The final book of the series was published back in 2007, but the series remains culturally relevant as a symbol of youth fighting for justice. Some people may be annoyed by the constant references to the series, but Rowling’s writing has clearly inspired a generation of readers to protest for what they believe in just as Harry, Hermione, and Ron Weasley did throughout the seven book series.

Josh Schmidt
Josh Schmidt is an editorial intern and is a native of the Washington D.C Metropolitan area. He is working towards a degree in multi-platform journalism with a minor in history at nearby University of Maryland. Contact Josh at staff@LawStreetMedia.com.
Share:
Related ItemsBooksBritishCultureDonald TrumpHarry PotterMoviesProtestProtest SignsResistance