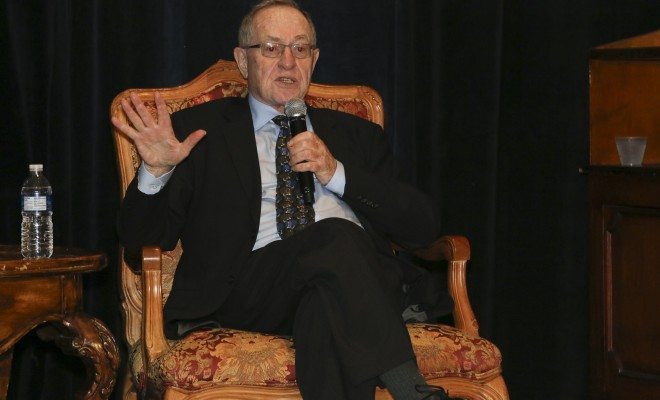 Image courtesy of [The Jewish Federation of Sarasota-Manatee via Flickr]

If they introduce the attorneys in a case like they announce an NFL team’s lineup before the game, it would look a lot like episode three of “American Crime Story: The People v. O. J. Simpson.” One by one, John Travolta’s plastic-faced Robert Shapiro assembles the behemoth legal team behind O. J. Simpson. We’re given the sense that the show is done revving its engine now, and it’s ready to speed along into familiar territory. The key here, building further on the earlier background episodes, is the word “familiar.” Is this where fatigue sets in?

When you’re telling people a story they already know, there is additional pressure to make your telling fresh. Since the show was announced, it has lived under the shadow of the public’s own knowledge of the case. It’s like watching a movie after reading the plot summary online. Or catching up on a TV show after your friend has spoiled the plot twists for you. As dramatic and intense the production becomes, it can’t escape the fact that it is by nature a surprise-less story. Therein lies the trouble for high-profile true crime: getting an audience to care again. “Serial’s”  first season, and “Making A Murderer” both focus on relatively low-profile cases—viewers don’t know what to expect and are surprised by each new witness or piece of evidence. That’s the trouble faced by “Serial’s” second season, in which they took on the high-profile case of Bowe Bergdahl.

The Challenge of Familiarity

With “American Crime Story,” audiences can’t be shocked. This alone doesn’t devalue the show, in fact, it makes the show better. That’s because the Clark’s team of prosecutors faces the same problem. Their witnesses are gabbing on television about what they saw, and the 911 tape is playing day in and day out on national television. Their jury will have already heard the story, already seen the evidence. By the time they’re in trial, it’ll be double exposure.

Ryan Murphy, the show’s producer, is Marcia Clark, and we are his jury. That might be why Clark is given a much more empathetic position, as penance for the “dowdy,” “bitchy,” and “shrill” comments hurled at her at the time. So how do Murphy and his team liven up an over-exposed story?

Much like the lawyers in O. J.’s case, “American Crime Story” needs to decide on a fresh narrative angle and make it stick. In its third episode, the show does just that, cementing several through lines. We’ve got the race angle, which builds as scheming lawyers construct a defense; the failure-of-justice angle, as we follow a cocky prosecutor losing her confidence; and the repercussions of fame angle, demonstrated most clearly through the Kardashian family’s rise to notoriety. And there’s a glimmer of themes to come, as the focus on Marcia Clark’s home life suggests the show will address sexism in upcoming episodes.

The race angle is “American Crime Story’s” most evident effort to make Simpson’s case relevant. The vignettes and quotes in episode three continue the pattern of looking at Simpson as both an example of and an exception to racial biases. For every TIME magazine cover darkening Simpson’s appearance, there’s a barb from Clark saying, “Doesn’t Simpson deserve a jury of his peers, you know, rich middle-aged white men?” That’s the balance struck by the show: when Shapiro tells Simpson “We get one black juror, we get a hung jury, you’re going home,” Simpson responds, “I’m not black, I’m O.J.” We see Shapiro dance around the word “black” as he explains why he wants Johnnie Cochran to join Simpson’s team.

As the titular dream team drums up sympathy for a ‘racist police’ defense, they’re riding on the coattails of earlier tragedies such as Rodney King and the Christopher Commission. This begs a valuable question: does it cheapen or invalidate the true injustices they’re referencing? To compare the sham of a racist cop defense with actual atrocities might lump those events together, in a disservice to the truly innocent victims of police violence. “American Crime Story” stays fresh because it makes us ask these questions about a decades-old case.

As for the miscarriage of justice, Clark’s confidence has been steeled even further since Simpson’s arrest. “A star is born” we hear her say. “He practically did my job for me” she boasts to co-workers as she delivers high-fives. A hyper-confident Clark at the beginning of the series builds tension in the viewer, who knows that failure is looming for her. We know she’ll fall, but just how and when remains to be seen.

While it makes for gripping television, the actual Marcia Clark clarified in an interview with Vulture that she was nowhere near as confident as her character on the series:

I’m sorry, the truth is, we were not [confident]. We’ve got to look confident, though. I’m not going to go out to the press and say, Oh, we’re going to lose! I have to present a confident case.

And finally, fame. Fame has long been a favorite topic of Murphy’s, ranging from “Nip/Tuck” to “Glee” to “Scream Queens.” An obsession with celebrity, along with its perils, has always been on the forefront of his productions. As for “American Crime Story,” the show deals best with fame when it discusses its intersection with race and gender and justice. It falters when it delivers us scenes that feel like prequels to “Keeping Up With The Kardashians.” Like David Schwimmer’s professorial delivery of a diatribe to his children about the trap of fame exemplifies this issue. Saying, “We are Kardashians, and in this family being a good person and a loyal friend is more important than being famous” is so egregiously ironic that viewers may need to visit an optometrist to address eye-rolling-related strain.

As for additions to the already star-studded cast, some new faces get screen time in this episode. Nathan Lane provides a delightful and nuanced F. Lee Bailey, Evan Handler gives us Alan Dershowitz–the most lawyerly lawyer I’ve yet seen on television–and Selma Blair is handed a few lines, with which she plays Kris Jenner better than Kris Jenner could.

And now that the show has found its footing, confidently asserting exactly the story it’s telling and why you should be watching, we’ll be able to see the ensemble cast flourish in the part of the rich trial drama that America knows so well.