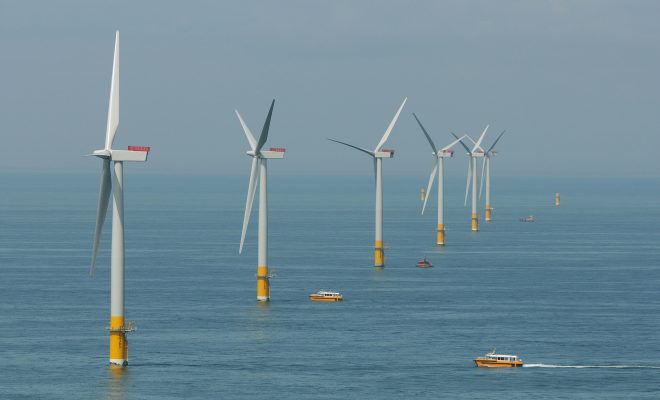 The five structures rise out of the Atlantic Ocean, in a perfect horizontal line. They look like toy pinwheels when viewed from the coast. But these five behemoths are certainly not toys–they’re the country’s first offshore wind turbines, spinning and generating power off the coast of Block Island, Rhode Island, a tiny vacation hamlet sandwiched between Long Island to the west and Martha’s Vineyard to the east.

“Rhode Island is proud to be home to the nation’s first offshore wind farm–and I’m proud to be the only governor in America who can say we have steel in the water and blades spinning over the ocean,” said Rhode Island Governor Gina Raimondo, in a statement from Deepwater Wind, the company that built the wind farm. The turbines were completed in August, testing was completed by October, and on Monday, they finally started spinning.

This is America’s very first offshore wind farm, off the coast of Rhode Island, which came online this week https://t.co/hfiGy197Ld

Block Island’s residents previously relied on diesel-fueled generators to power their homes, but with Deepwater Wind’s groundbreaking project, 17,000 homes, or 90 percent of the island’s electricity needs, will be generated by the powerful gales that blow just off the coast. Still, Rhode Island is the smallest state in the country, and the wind farm is expected to generate only one percent of the state’s electricity. The $300 million project is set to shave off 40,000 tons of carbon emissions each year, according to Deepwater Wind.

With the environmental costs of fossil fuels becoming increasingly clear to scientists, politicians and private companies are working in concert to embark on job-creating projects that provide energy from clean sources. “With this project, we’ve put hundreds of our local workers to work at-sea and at our world-class ports and are growing this innovative industry. I applaud Deepwater Wind for leading the way,” Raimondo said.

Wind farms already dot the country, with more springing up over the past few years. There are about 50,000 turbines on U.S. land, supplying roughly five percent of the country’s energy. But while offshore farms are more expensive to build, and more difficult, they have a significant upside, as winds are stronger and more consistent over water than land, and offshore turbines could generate much more power than those on land.

While many Republicans deny or downplay the effects of climate change, offshore wind farm projects have attracted bi-partisan support. Governor Andrew Cuomo, a Democrat of New York, set a goal for 50 percent of New York’s energy to be generated by renewable sources by 2030. And Governor Charlie Baker of Massachusetts, a Republican, signed a bill that orders state utility companies to work with offshore wind farms companies.

Many subsidized renewable energy undertakings are built on a policy drafted by the Republican-led Congress under President George W. Bush, the 2005 Energy Policy Act, which provides “loan guarantees for entities that develop or use innovative technologies that avoid the by-production of greenhouse gases.”

“As the Ocean State, we’re motivated by our shared belief that we need to produce and consume cleaner, more sustainable energy and leave our kids a healthier planet,” Raimondo said.