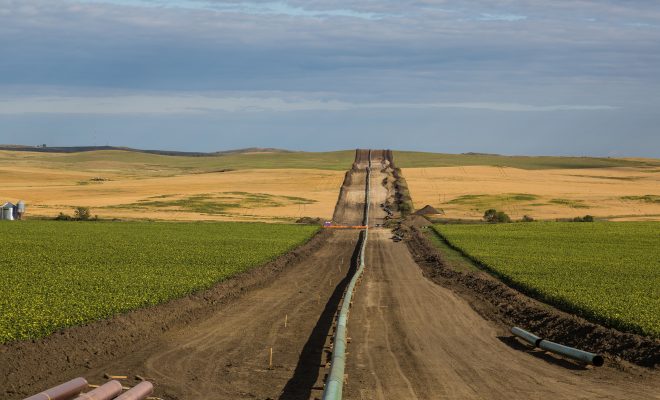 Protests against the Dakota Access Pipeline in North Dakota turned violent over the weekend, with Native American protesters from the Standing Rock Sioux Tribe facing off against security staff from the oil company building the pipeline, Energy Transfer Partners. Now, the U.S. Army Corps of Engineers says it does not oppose a temporary break in the construction.

When the protesters approached construction workers on Saturday, security guards unleashed dogs on them. Six people were bitten, including a young child, according to Standing Rock Sioux Tribe spokesman Steve Sitting Bear. He also said at least 30 people were pepper-sprayed. The spokeswoman for the Morton County Sheriff’s Office, Donnell Presky, said they didn’t have any records of protesters being injured, but that four security guards and two dogs received injuries. She also said the Energy Transfer Partner’s helicopter filmed the protests and handed the footage over to the police.

Pictures on social media do indicate injuries for the American Indian protesters.

Democracy Now! documented some of the clashes.

The pipeline is estimated to cost $3.8 billion and run through four states. The tribe filed a complaint earlier this summer since it believed the Army Corps didn’t follow proper procedure when it approved Energy Transfer Partners to start building the pipeline. The tribe said the construction would destroy sacred places and burial grounds, and may affect the drinking water in the community.

After the construction started anyways and resulted in violence on Saturday, the tribe filed an emergency motion on Sunday, in which its representative Tim Mentz Sr., wrote that the construction team seemed to have targeted the burial grounds on purpose, starting the digging right where he had asked them not to. This happened even though the actual construction work was going on 20 miles away. He also described the guards with dogs and a helicopter accompanying the digging, as if they expected protests and controversy.

The Army Corps replied to the tribe’s motion by saying it does not oppose a halt in the construction, since the tribe is unlikely to succeed with its lawsuit. However, it did acknowledge that the protests during Labor Day weekend were violent and that it would be in the public interest to preserve peace. According to NPR, it said:

The Corps acknowledges that the public interest would be served by preserving peace near Lake Oahe until the Court can render its well-considered opinion on Plaintiff’s Motion for Preliminary Injunction. The Corps therefore does not oppose this short and discrete temporary restraining order.

On the energy company’s website it says it would listen to the opinions of locals to minimize disruptions of the land:

We will listen to and address questions from the community, landowners and other interested stakeholders about the project, proposed routes, landowner communications and more. It is our intent to live up to our promises of openness, honesty and responsiveness before, during and after construction and throughout operations.

The opposite seems to be true when it comes to the Sioux Tribe. But hopefully peace will be maintained during the interruption to construction.

Emma Von Zeipel
Emma Von Zeipel is a staff writer at Law Street Media. She is originally from one of the islands of Stockholm, Sweden. After working for Democratic Voice of Burma in Thailand, she ended up in New York City. She has a BA in journalism from Stockholm University and is passionate about human rights, good books, horses, and European chocolate. Contact Emma at EVonZeipel@LawStreetMedia.com.
Share:
Related ItemsEnergy Transfer PartnersMorton CountyNative AmericanNative AmericansNorth DakotaOil PipePepper-SprayProtestsSiouxStanding Rock Sioux TribeTribeViolent Protests