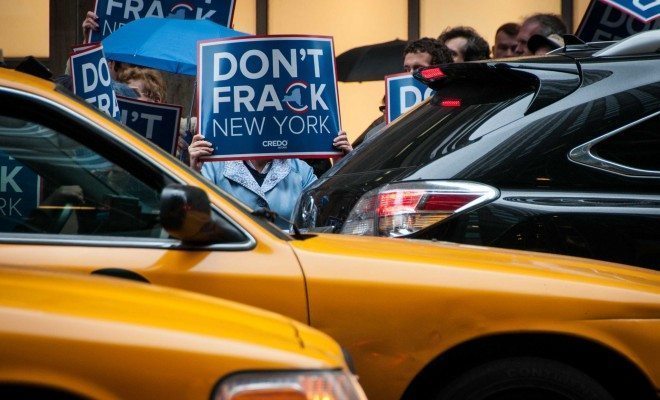 Is the New York Fracking Moratorium a Good Thing?

Recently, Governor Andrew Cuomo officially announced that New York State will ban fracking. Hydraulic fracturing, or fracking, is a process of extracting natural gas that involves injecting water, sand, and a combination of chemicals underground on site in order to fracture the shale rock and release the gas. A highly controversial topic, Cuomo’s decision was controversial as well–he was met with both praise and criticism from a highly divided demographic. However, the move to ban fracking is a strongly defensible choice, and the arguments against the ban do not hold up well under scrutiny.

For example, natural gas has been lauded as a solution to American foreign oil dependence. In the wake of ongoing turbulent relationships with the Middle East and oil rich nations therein, many suggest that the large deposits of natural gas within the borders of the United States is a possible means of alleviating the country’s need to import oil from them. But is such a complex plan of developing an elaborate and brand new energy industry the most logical solution to problems in international relations? Rather than go about this process in order to avoid dealing with these tense situations, why not attempt more diplomacy in hopes of alleviating them? Oil and natural gas aside, it would not be such a bad thing to genuinely pursue better relationships with Middle East countries. Hiding behind the energy industry as an excuse is not a sustainable argument.

Others argue that natural gas is cleaner than oil. Natural gas emissions byproducts are lower and less damaging than those of oil, and it is of a substantial energy density so as to sufficiently provide power to our machines and devices. However we should not be tempted by the quick, convenient, and immediate solution. It will still cause problems and will run out eventually. This argument comes back to renewable energy. There is plenty of potential and increased economic accessibility to renewable energy, which is cleaner than natural gas and will not run out. Thinking purely in terms of energy requirements, we do not need natural gas.

Aside from geopolitics and national scale energy needs, some tie natural gas and fracking directly to the benefit of people on the ground. There is an American cultural identity tied into coal and mining towns. It is a widely applicable occupation, providing employment to individuals and income for families. Coal mining is a means of asserting ones identity, and has often been passed down through generations. Fracking is a technology intensive process demanding expertise and consequently cannot be undertaken by anybody. Arguments that fracking provides economic opportunities for towns in which shale is located are shaky. Unlike coal, where the industry arrives on site and hires locals to pursue the mining, fracking companies often bring in outside workers to extract the gas; the residents of the town rarely benefit from the boom.

A fracking site. Courtesy of Casey Hugelfink via Flickr.

Some people of a financially minded nature have suggested that the moratorium represents a transfer of economic resources from farmers to environmentalists. Residents of southern New York State are now unable to receive royalties from resource development and gas mining. Tim Worstall, the author of a fiscally conservative Forbes Magazine article on the topic, suggests that the environmentalists are being granted their desires and benefits at a cost which is the loss of acquisition of desires and benefits for the people who could receive money for fracking on their land. He proposes a hypothetical situation that in order to maintain a balanced public policy, environmentalists should literally pay homeowners their losses for not fracking. He is of strong opinion that this would be met with high resistance, in demonstration of his point that this process is unfair.

No doubt this scenario represents a substantial portion of the controversy over fracking. However the author is thinking of benefits and losses purely from an economic standpoint. On the one occasion that he might be considering the state of the environment, he refers to environmentalists’ interest in preventing fracking in “the fair state of New York”. In this sense it is an aesthetic issue. Interestingly enough, there is little in the way of aesthetic damage when it comes to fracking, although it does turn small farm towns into industrial sties. Then there is the catastrophic side effect of increased likelihood of earthquakes. However, environmentalists’ resistance to fracking is very much motivated by human health concerns. The primary problem with fracking is that the myriad of chemicals injected into the rock seeps into the groundwater. This can be damaging to the human body when consumed, potentially causing neurological disorders, birth defects and cancers, and is most visibly linked to flaming faucets. The volume of chemicals is so high that water can literally catch fire. The documentary Gasland delves further into these issues and additional dangers of the industry and refineries. Here is a trailer:

Flaming faucets and contaminated drinking water are most common for homeowners in close proximity to the fracking site. Namely, those on whose land the fracking will take place. Here is a major cost for which the author of the Forbes article does not account.

Produced water is the mix of chemicals, metals, and carcinogens that comes up during the fracking process. In some New York counties, produced water has been used as a de-icer, sprinkled across roadways throughout the winter. Then it runs off into streams and waterways. This is dangerous for fish and local wildlife that live nearby, as well as for humans who drink that water. This increases the range of contamination from near to the fracking site to across the entire state. It is a misuse of a substance that should not exist in the first place.

Considering the long list of potential alternatives for meeting our energy needs, we do not need natural gas. Furthermore, considering all the problems associated with the current method of extracting it, we certainly do not need fracking.