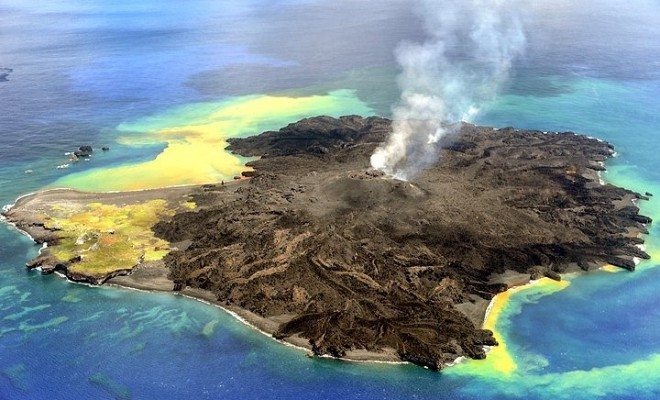 A New, Beautiful Island Has Formed in the Pacific

“And then one day…an eruption of liquid rock occurred…It threw forth the same kind of rock, with the same violence, and through the same vents in the earth’s core. But this time what was thrown forth reached the surface of the sea. There was a tremendous explosion as the liquid rock struck water and air together. Clouds of steam rose miles into the air. Ash fell hissing upon the heaving waves. Detonations shattered the air for a moment and then echoed away in the immensity of the empty wastes.”

Legendary author James Michener’s eloquent words describe the formation of the islands of Hawaii–the powerful volcanic activity that over the course of millions of years sent a column of rock from the seabed to the open air. Now, off the coast of Japan, it occurs once more.

In November 2013 a small speck of material breached the surface of the Western Pacific Ocean. In the last year and a half, it has widened to nearly 0.95 square miles and the volcanic cone stands several hundred feet tall. The size of the island is expected to slow and be limited, not by the amount of lava that spews forth, but by sea activity; there are already signs of erosion and formation of beaches at the edges of the island. As it stands, this is impressive enough: a modern, visible manifestation of the geological cycle, as some islands and sections of continents erode and disappear, and other brand new ones form right before our eyes.

But there are many more impressive processes that are about to occur on this island–Nishinoshima–that are of major scientific value. As it stands, the island is barren rock. Much of it is still steaming, as the volcano continues to erupt. But once it settles down and begins to cool, it will serve as a good spot for birds to rest. When they do, they will inevitably deposit feces, feathers, vomit, and material that they have unconsciously carried from elsewhere. This can include seeds and fertile soils. Some seeds are specifically designed to float on the wind or surface of the water and may arrive there on their own as well. Therefore, scientists intend to closely monitor the island as it hosts and begins to produce life of its own. The initial sparks and subsequent development of an ecosystem is something rarely observed and studied.

It is important to scientists that anyone who goes to the island is cautious not to accidentally carry with them any kind of outside material or life that could influence the early evolutionary process. Evolutionary biologists have raised this concern, as the first people to set foot on the island are likely to be geologists and vulcanologists, who do not have the same foci and concerns. Obviously at this point and for the foreseeable future the island is off limits to civilians and tourists.

Birds are vital to the development of island life. Courtesy of Ville Miettinen via Flickr.

The island chain of which Nishinoshima is a part is already known for a variegated and fascinating ecosystem. The Ogasawara Islands are a UNESCO (United Nations Educational, Scientific and Cultural) World Heritage Site. Nishinoshima is therefore on track to be protected and preserved for the sake of humanity’s heritage. This in and of itself, in addition to the fact that it may be absolutely beautiful there in due time, could result in a vibrant tourism industry. Economic interests aside, in the meantime it will be fascinating and moving simply to watch the island develop and flourish, a tangible indication that the Earth around us is active and alive.

Franklin R. Halprin
Franklin R. Halprin holds an MA in History & Environmental Politics from Rutgers University where he studied human-environmental relationships and settlement patterns in the nineteenth century Southwest. His research focuses on the influences of social and cultural factors on the development of environmental policy. Contact Frank at staff@LawStreetMedia.com.
Share:
Related ItemsJapannishinoshimaUNESCOvolcanic island