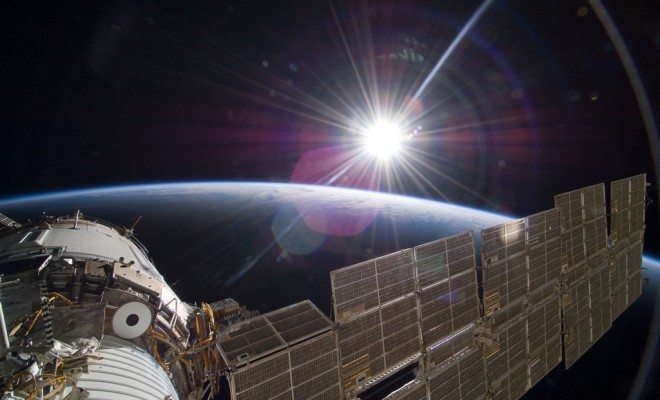 Near Space is Choked With Debris That We Put There

The popular image of an asteroid field–a chaotic clutter of rocks so dense that the odds of successfully navigating one in a spacecraft are immensely slim–is something of a misnomer. In reality, most known fields are spread over such a vast distance that there are titanic spaces between each body; it would be more like driving on a gently winding road through the mountains; however, there is a dense and dangerous field much closer to home. It orbits tightly around the Earth, and is composed of man-made objects and debris and poses many dangers and problems to those on space missions as well as those of us at home.

Space missions, particularly the earlier ones at the dawn of the space age, have left many things behind. Sometimes it has been accidental from equipment or crafts breaking, other times it has been a discharge of unnecessary material. In this sense, missions are inefficient. Further, there have been reckless and irresponsible actions that produced enormous quantities of space debris. For example, in 2007 China demonstrated its missile defense program by shooting down a satellite orbiting in space. “Shoot down” is a misleading term, because in did not come back down to Earth. Instead, it blew into countless pieces that now orbit us.

Imaging of space debris in a tight cloud and an outer ring. Courtesy of NASA Orbital Debris Program Office, photo gallery via Wikipedia.

Estimates suggest that there are at least 500,000 pieces of debris. In addition to the fact that NASA can only know of and track so many pieces, they all travel at velocities of around 17,500 miles per hour. This is a phenomenal speed, and can inflict massive damage. Debris has collided with satellites and spacecraft, damaging or destroying them, thus adding more debris to the field. The International Space Station is particularly vulnerable. The impact from a larger object can tear away an entire section of a spacecraft, dooming it. Even the smallest pieces traveling at such speeds can tear the airtight suits of astronauts, shatter their face shields, or conjure up other horrifying images we only thought existed in science fiction.

Back on solid ground, human society’s ever-growing network of communications deeply depends on orbiting satellites and space relays. This is more than just getting a signal on our cell phones; our entire way of life is tied into outer space relays. Man-made objects in space often face decaying orbits in time. This means that they come back down to Earth. The smaller ones are likely to burn up in the atmosphere, and the ones that make it through face large odds of crashing in the ocean. Hopefully they are subsequently retrieved, as garbage and man-made objects in the oceans is a problem in and of itself; however, there is a chance that these things will hit land. In 2001, the upper stage of a rocket that launched a satellite in 1993, which had been orbiting the Earth as space debris, crashed down in the Arabian desert. Although there have yet to be any deaths or injuries reported in conjunction with space debris, it is an ever more likely scenario.

The crashed rocket module. Courtesy of NASA via Wikipedia.

NASA has protocol for tracking space debris and maneuvering spacecraft in evasive manners if necessary. But what do we do about trying to reduce the problem? We can’t exactly send people up in orange vests to pick up the pieces one by one. There exist some proposals regarding specific trips to the larger objects with the intention of dragging them down, as well as lasers for destroying and redirecting some of the smaller ones. These ideas would be incredibly expensive and highly inefficient. Ultimately, the problem seems irreversible.

The best course of action is to reduce further debris from becoming part of the field. This comes in the form of making parts of rockets and ships that are reusable. As we continue to face questions of sustainability on Earth, our presence in space demands the same standards. Space Exploration Technologies Corporation, or SpaceX, one of the companies that NASA has hired to bring supplies to and from the International Space Station, is working on multi-use rockets. The CEO of SpaceX, Elon Musk, stated that using a one-time rocket is equivalent to flying a 747 on a transcontinental flight once and then throwing it away. In this sense, SpaceX’s endeavors are largely motivated by financial concerns. Musk projected that reusing all the stages of a rocket could cut operational costs to a hundredth of what they are now. Nonetheless, a couple of weeks ago the company launched a rocket intended for a cargo run to the International Space Station, a stage of which they subsequently intended to land on a barge in the Atlantic Ocean; however, the piece landed in a rough manner and exploded. Nonetheless it was a good attempt and has positive implications for the future.

After several hundred years of living high environmental impact lives, we only recently have begun to ask serious questions about the damage we have been doing, how to fix it, and how to change for the future. After half a century of venturing into space, we have already left an ugly mark on that environment too. The fact that we are now seeing attempts to address that is optimistic. As we contemplate how to live sustainably on Earth, we attempt to venture sustainably into space.