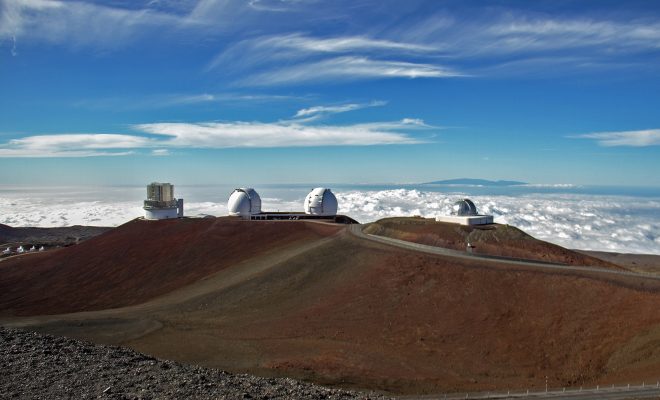 A hearings judge in Hawaii ruled the state could reissue a building permit for a telescope on Mauna Kea, a 14,000-foot dormant volcano that has become a lighting rod over the past few years. While the ruling is sure to fan the flames of a long-simmering conflict between astronomers and Native Hawaiians, the telescope has a ways to go before it can decipher the deepest mysteries of the universe.

The $1.4 billion behemoth, commonly called the Thirty Meter Telescope (TMT), would be the largest telescope in the Northern Hemisphere. It is one of three mammoth-sized telescopes being considered around the globe–the other two are in Chile. The project is backed by researchers at the California Institute of Technology and the University of California, who say it would be used to observe far-away planets and galaxies. India, China, and Canada have reportedly invested in the project as well.

But a faction of environmental groups and Native Hawaiians have passionately protested the telescope’s construction on Mauna Kea. The legal battle over Mauna Kea, considered a sacred site by some native groups, began in 2011, two years after the site was selected as the future home of the TMT. The state’s Board of Land and Natural Resources issued a permit for the telescope, which was contested by the project’s opponents to no avail.

In 2015, the Hawaii Supreme Court revoked the building permit, saying the board cut corners in approving the telescope. The application process started over, and retired Judge Riki May Amano was appointed to rule on whether or not the board should be granted the ability to issue a new building permit. On Wednesday, Amano decided that the board should be able to do so, on the condition that workers and astronomers undergo “mandatory cultural and natural resources training.”

“TMT welcomes the recommendation that a state permit be issued, and we respectfully look forward to the next steps,” Ed Stone, executive director of the TMT International Observatory, said in a statement. “We are grateful to all our supporters and friends who have been with us during the hearing process and over the past 10 years, and we remain respectful of the process to ensure the proper stewardship of Mauna Kea.”

Hawaii Gov. David Ige has also expressed support for the project. In a statement released after Amano’s decision, Ige said: “I support the coexistence of astronomy and culture on Mauna Kea along with better management of the mountain.”

Next up, the board will hear arguments on whether or not to accept Amano’s ruling. Regardless of the board’s decision, the case is likely to wind up back at the Hawaii Supreme Court. The telescope’s directors said if the telescope does not get built on Mauna Kea, it will end up in the Canary Islands off the coast of Spain.