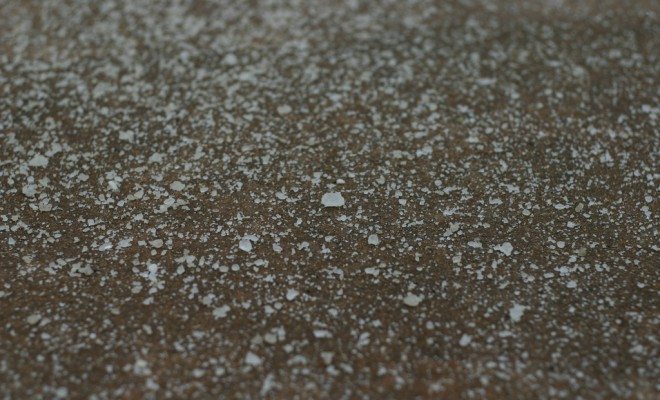 Just Say No to Ice-Melting Salt This Winter

Now that winter is in full swing, we go to extensive measures to make sure that our roadways and sidewalks are passable and safe. As we plow and shovel, we also use salts to serve as ice melt. While they come in numerous forms, many of them are strong salts that pose problems for the roadways themselves, the environment, and our pets.

As it is, I work hard to clean snow and ice out of my dog’s paws when she comes inside on a winter day. If those things become lodged they can irritate the sensitive pads or cause an infection. But if she steps on salt-based ice melt during the course of our walk, potentially serious problems can occur. First of all, it burns. I’ve seen my dog limp and try walking on three feet with the other raised up in the air because it is painful to step down. She’s whimpered and cried, and licked obsessively in an attempt to remedy it. This can cause further problems; ingesting these salts can cause gastrointestinal ailments such as vomiting and internal burns in the mouth and digestive tract. Extreme cases might even lead to liver failure or pancreatitis. I clean and disinfect her paws, apply soothing sprays, but can only do so much to prevent her from eating snow and ice outside that may contain some of the salt.

There is no reason to use these types of salts. Sometimes salts are not necessary at all; laying down sand can provide traction enough. In many areas a homeowner is directly responsible for the portion of the sidewalk that is in front of his house. While some people are quite neglectful of this duty, others take it to the extreme. I have encountered stretches of sidewalk that are so choked with strong salts that my dog and I are better off walking in the middle of the street. There are plenty of ice melts that are labeled “pet safe.” These are not nearly as problematic, though they are not necessarily perfect as they may still contain some similar ingredients. It is best to ask your vet or an employee at the store for more information.

Little boots are an option, as well. They are cute and fashionable and will protect the paws; however, I know my dog would not tolerate them. She would feel restricted and would spend the walk trying to tear them off. While they could help some dogs, this is avoiding the problem rather than eliminating it.

It is also worth noting that we track these salts into our homes on our shoes, as well. This can cause damage to wood floors and rugs. In addition, stronger salts crack the roadways. This is one of the reasons, in addition to the expansions and contractions induced by temperature changes, that roads are riddled with deep potholes by the time spring arrives. This gets expensive for taxpayers to fund repaving year after year, as well as poses dangers to drivers and can damage car suspensions, axles, and tires. Recently there were even several accidents on New Jersey’s Palisades Parkway largely due to incredibly rough roadways.

Remember how when Rome sacked Carthage they sowed the soil with salt so that nothing would ever grow again? We too are doing damage to the environment by sprinkling salt everywhere. It can burn grasses and plants, poison birds, and wash into waterways. From there it can harm aquatic life. This is a major issue; there is a sharp contrast in biological characteristics between fresh water creatures and salt water ones. Salt in fresh water is incredibly deadly.

We are therefore dealing with an environmentally irresponsible set of practices. Ideally an alternative to salting in its entirety would be a nice development, but in the meantime reducing or eliminating one of the problems that it causes would be a good step forward. So that our best friends can safely take steps outside, let it be with concern to pet friendly salts.

Franklin R. Halprin
Franklin R. Halprin holds an MA in History & Environmental Politics from Rutgers University where he studied human-environmental relationships and settlement patterns in the nineteenth century Southwest. His research focuses on the influences of social and cultural factors on the development of environmental policy. Contact Frank at staff@LawStreetMedia.com.
Share:
Related ItemsDogsICEice meltPetsroad saltrock saltSaltWinter