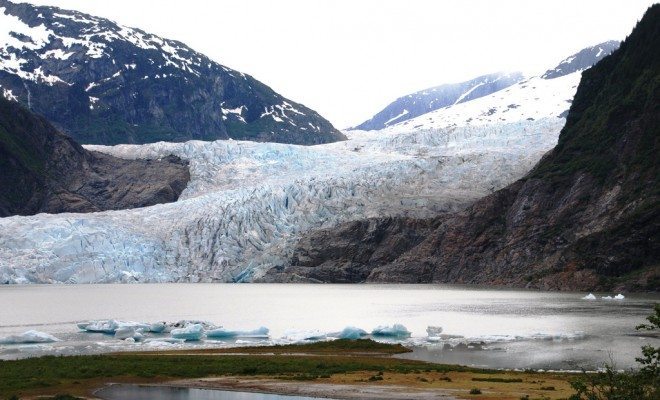 Climate Change, Melting Glaciers, and the Future of Alaskan Tourism

The five-foot high tires were insufficient to prevent the specially designed bus from jostling about as it turned off the road and toward the Columbia Ice Field in Alberta, Canada. The massive carpet of ice expanded in all directions upon disembarkation, as I walked about the sheet that was hundreds of feet thick and thousands of years old. A small stream of water meandered by. It was water only recently thawed; water that had frozen before industrialization and heavy increases in air pollution. I cupped my hands in the crystal and cold flow and sipped. It was perfect. I was eight years old, enthralled, and officially a nature lover.

Four years later we returned to the Canadian Rockies to immerse ourselves in the wilderness once more, without any doubt that we would pay a visit to the Columbia Field. The bus again turned off the road, but this time onto an expanse of grey rock. We were in the same location as last time, but the glacier was not there. It still existed, but was far in the distance. In only a few years it had melted substantially, retreating into the mountains. I was 12 years old, horrified, and officially an environmental activist.

Glaciers are the most visible manifestation of climate change. Photographer James Balog utilized this concept in an attempt to bring to the forefront the urgency of the issue. In his project Extreme Ice Survey, he and his crew mounted 25 cameras to take snapshots of glacial activity every daylight hour for three years, yielding distressing results as to the rapidity of glacial melting. The project was documented in the 2012 film Chasing Ice.

Some argue that the situation is not so severe, as glaciers ebb and flow with the seasons. The guide at the Columbia Ice Field related that the sheet rises 50 feet in the winter and melts 80 feet in the summer. Therefore, while it does grow in the cold months, there is an overall trend of recession. Further, many glaciers consistently recede regardless of season.

A study in the Yukon from 1958-2008, Chasing Ice explains, tracked 1,400 glaciers in the region. Over the course of the half century, four grew, 300 disappeared entirely, and the other 1,096 shrunk. Though they are powerful symbols of environmentalism and conservation, these figures do not solely embody a concern for saving the glaciers. Despite the fact that they are often portrayed in tandem with other champions of conservation, such as polar bears and their struggles to survive in the face of melting ice sheets, the issues at hand are a microcosm of the challenges of mitigating the causes and repairing the consequences of human-induced climate change.

A recent article in the Alaska Dispatch News explored the potential effects of climate change on said state’s tourism industry. The U.S. Forest Service in Juneau has expressed concern over the shrinkage of several notable glaciers as they withdraw from the line of sight at lookout points, reducing the number of annual visitors. Furthermore, the author relates, a study suggested that melting permafrost might increase the region’s susceptibility to invasive species and shorten ski seasons.

The study attempts to take an optimistic angle in the face of these ominous developments, suggesting that the extended summer cruise season and concept of “last chance to see it” are about to create a short-lived boom in the tourism industry there. These are very shallow cheers. A “last chance” promotion is not financially sustainable for the long term of tourism, and more importantly, it is not an acceptable response to the threats to the environment there. Nor is it acceptable to sit back and allow unnatural change to occur, capitalize on the new reality, and allow the old state of things to disappear and be destroyed. While Alaska is beautiful in the fair weather and expanded opportunities for a summertime vacation there are enticing, that is not what the place was originally like before substantial human intervention. There are plenty of locations across the globe to which one can venture for a summer retreat; Alaska should be visited for what it was, and for what it ought to remain.

A cruise ship docked in Ketchikan, AK, courtesy of blmiers2 via Flickr

What Alaska was, and ought to remain, has figured substantially in American cultural identity and early manifestations of the conservation movement. In 1879, John Muir made his first trip to the wild lands. Many followed in his footsteps, including an expedition in 1899 on which a crew of scientists noted how deforestation, clear cutting, over fishing, and animal slaughtering were already stripping Alaska of its natural resources. One of the scientists later published a study arguing that the mining activities there, as the Yukon Gold Rush was in full swing, were not sustainable in the long run; Alaska’s economic future, he prophesied, lay in wilderness (eco) tourism. Furthermore, as historian Douglas Brinkley relates, Muir believed that the more people saw of Alaska’s frozen wonders, the more likely they were to become conservationists.

These two concepts formed powerful components of Teddy Roosevelt’s platform and presidential objectives. He agreed with the naturalist William H. Dall in seeing Alaska as “…having ecological, moral, scientific, and spiritual values that would help reserve the frontier spirit.” Regardless of truth or falsehood, the frontier mythos and concepts of rugged individualism played important roles in American identity. By the early 1900s, Manifest Destiny had brought the United States border to the Pacific Coast; Alaska was dubbed the final frontier. The wilderness, presumably so vital in the development of values and Americana, had to be preserved here if American culture was to survive. Enabling people to get in touch with nature would, as writer and environmentalist Aldo Leopold stated, “build receptivity for ecosystems in human thinking.”

The growing awareness and value systems resulting from human contact with nature helped in the latter’s preservation, and continues to do so to this day. It worked for me; the spiritual beauty of the glacier inspired an appreciation in my heart for the natural world and its right to survive. In order to be a self-fulfilling prophecy, it must endure in order to inspire people and societies to maintain it. The current tourism industry in Alaska must remain focused on the real environments and benefits of the North. Establishing national parks to protect lands has helped in the past, as the main threats to the environment were direct human activities such as logging. Now, the threats are more varied in source and wider in scope. It will take many actions on multiple fronts to retain an interest in the locale and take the necessary steps to maintain the state of things there. The glaciers and tundra of Alaska and the Arctic are not a desolate wasteland, but places of great aesthetic value to be admired in their own right.

“Though the storm beaten ground it is growing on is nearly half a mile high, the glacier centuries ago flowed over it as a river flows over a boulder; but out of all the cold darkness and glacial crushing and grinding comes this warm, abounding beauty and life to teach us that what we in our faithless ignorance and fear call destruction is creation finer and finer.”